Yes, I’ve been here before. I’ve walked over the bridge, visited the museums, stared at the cemeteries, and become suitably depressed. Why would I want to do that again? Well, the railway creates some great photo opportunities. There’s the bridge in town, the station, the sections further out of town clinging to the cliffs. I decided I wanted aerial photos.

Of course, it’s not the bridge built by the prisoners of war, it’s not the bridge featured in the movie, and it’s not even the same river that flowed under the original bridge and the one in the movie. But you might think it is because they sneakily renamed the river to make you think it’s the same! But you don’t need to know any of that because it might spoil your fun.

So, I went to the new bridge early morning on day 3 where I was greeted with the dreaded Japanese military flag adorning the entrance. They have to be joking, I thought. How utterly inappropriate. 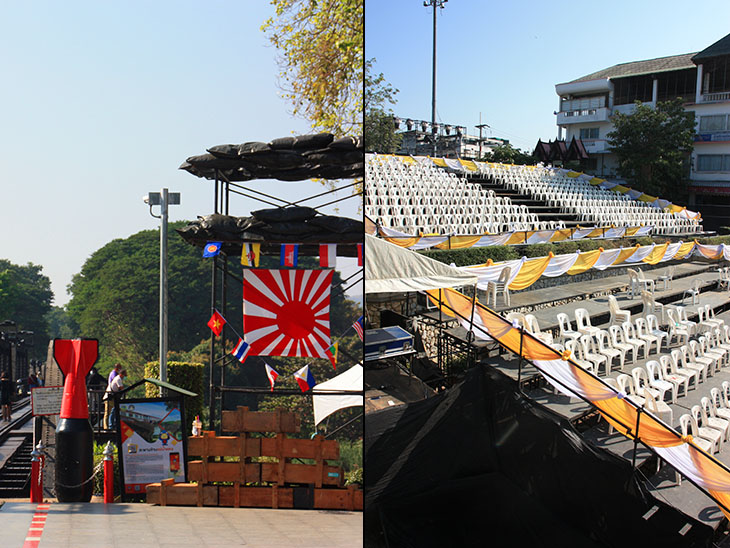 But then I remembered it was only a week away from the annual son et lumière show so the flag was a temporary addition. My blood pressure went down a couple of notches. Not that I think the show is in any way appropriate. Fake bombs, flashing lights and fireworks seem like an odd way to commemorate the deaths of 130,000 men. But it’s good for tourism and creates lots of extra revenue for the city.

I took photos of the bridge, and the view of the Guanyin Statue across the river which looked peaceful. 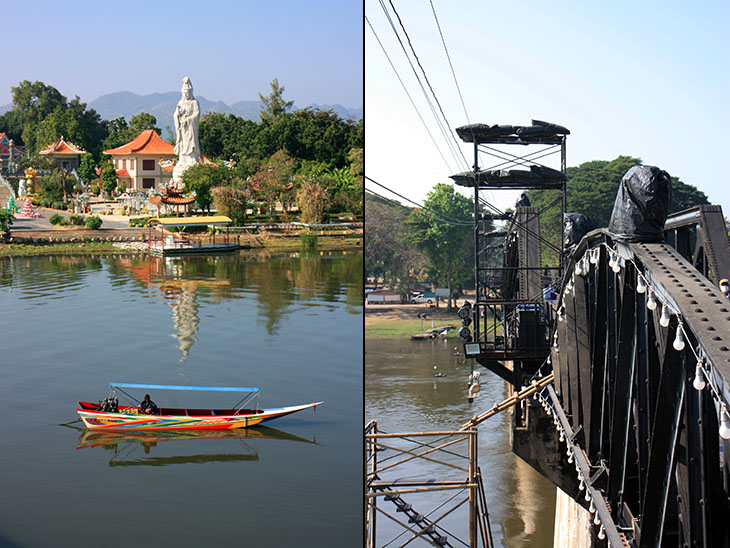 The bizarre structures on the bridge, and the extra lighting are all connected to the son et lumière show.

So then I wandered north of the river, back to the station. 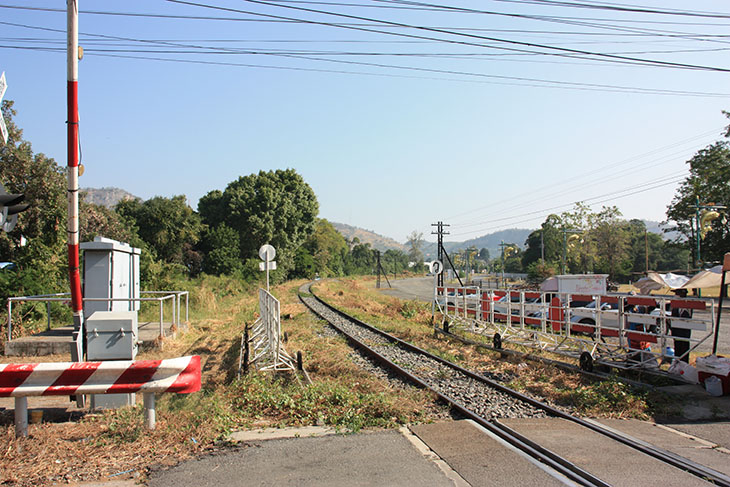 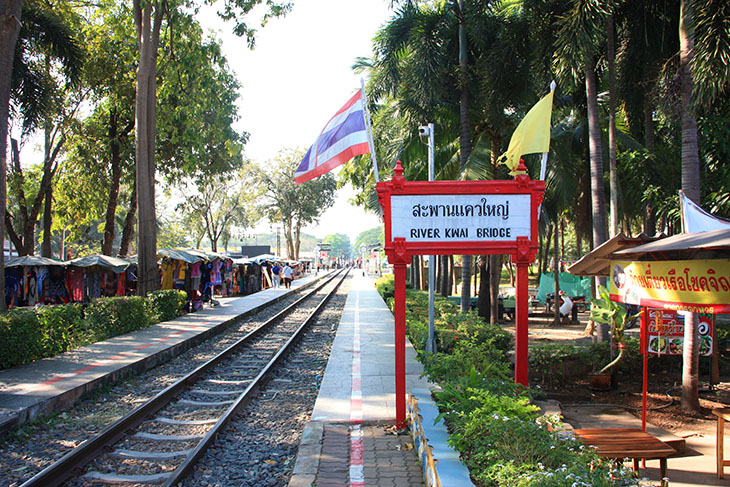 Beware: If you’re arriving in Kanchanaburi by train, it’s not this station. This one is the River Kwai Station.

Anyways, I nosed around, and was accosted by a policewoman and a station official. In these covid times they don’t see many farangs, especially at an hour when most tourists would still be munching breakfast. I was bombarded with questions – I must say, in a most friendly manner. I was photographed. And made to feel famous for ten minutes. When they asked why I was there – not wanting to seem like a regular tourist I said – “Oh, I’m a drone pilot and I want to get aerial photos of a train on the bridge, and at other locations along the route.” This revelation switched them into high gear and they produced timetables so I could see when there would be a train on the bridge, and given a detailed description of places along the route where I might want to film. Highlight of the day.

There was one place about 30kms out of town which seemed like the best location, and the policewoman – yes, the policewamon – advised me that if I drove fast enough (what? me?) I could see the train go over the bridge in town, and arrive before it at Tham Krasae. So I did. 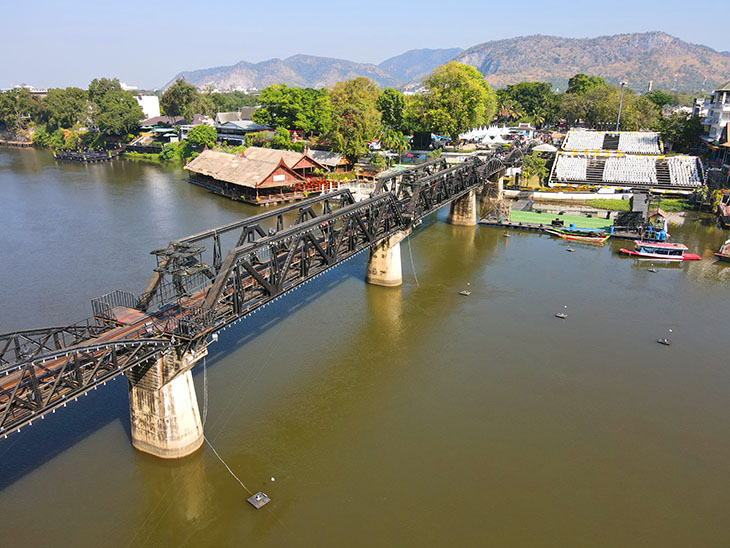 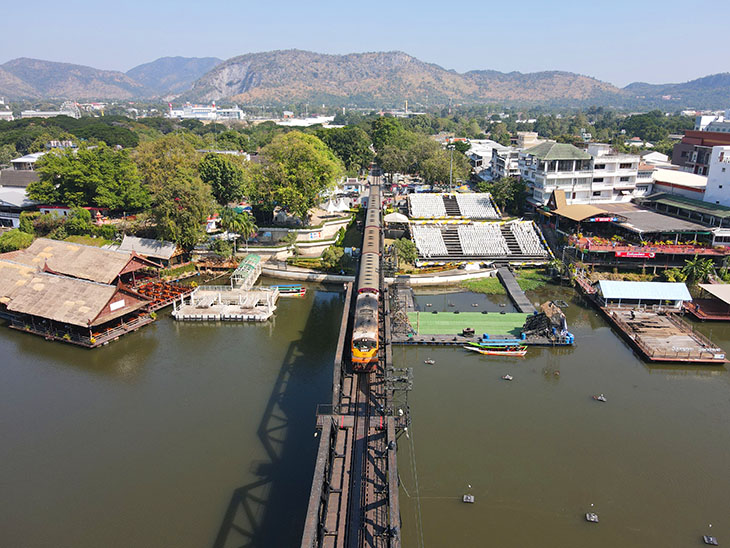 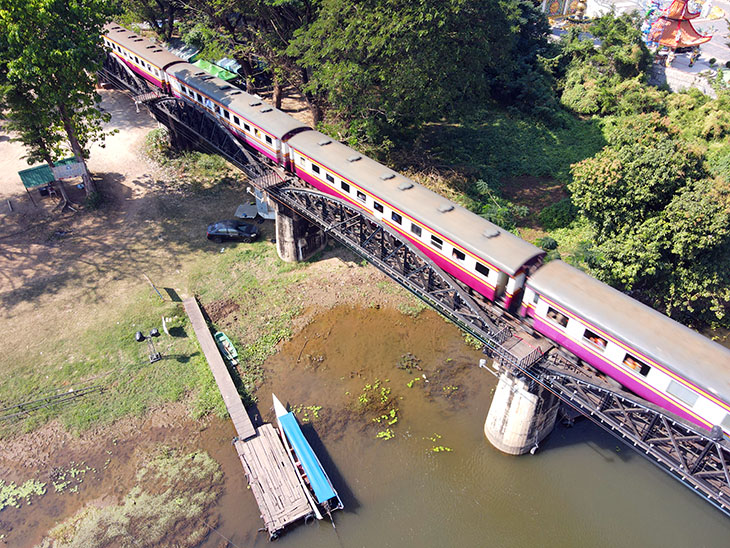 And then out at Tham Krasae. It took me a while to figure where to shoot from. The track is built on tressles clinging to the hillside next to the river. No way to film from there. So I had to find a tiny road that lead back to the river on the opposite side. Mission accomplished… 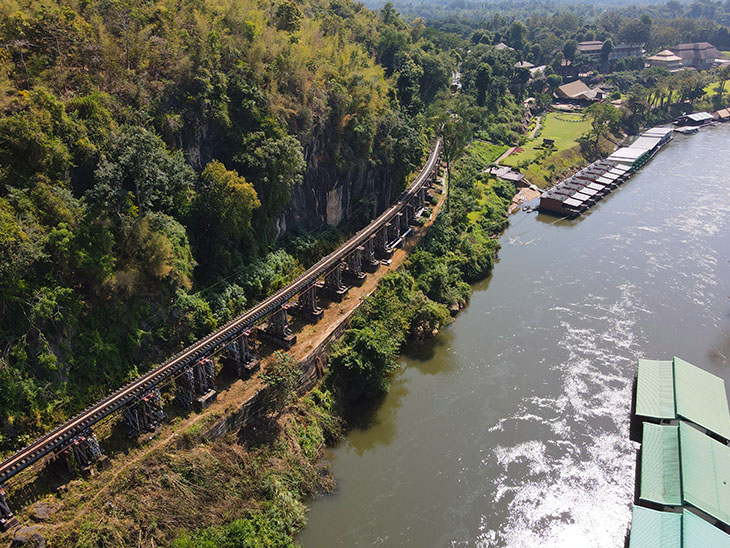 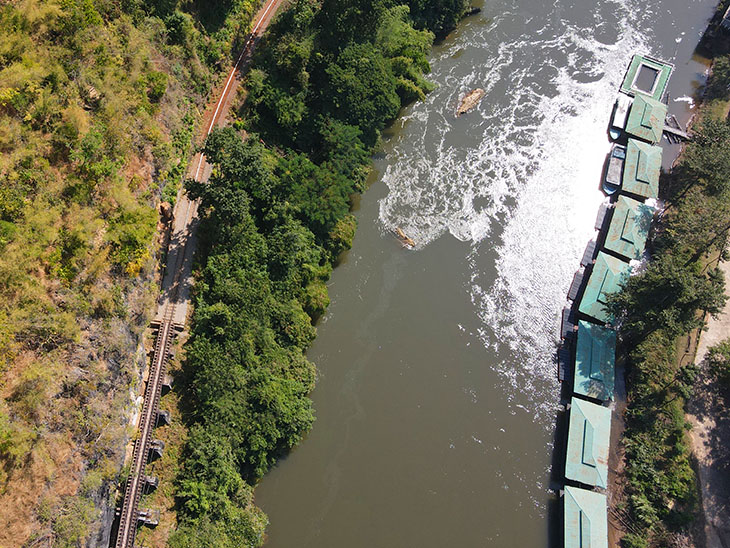 I had indeed arrived before the train… 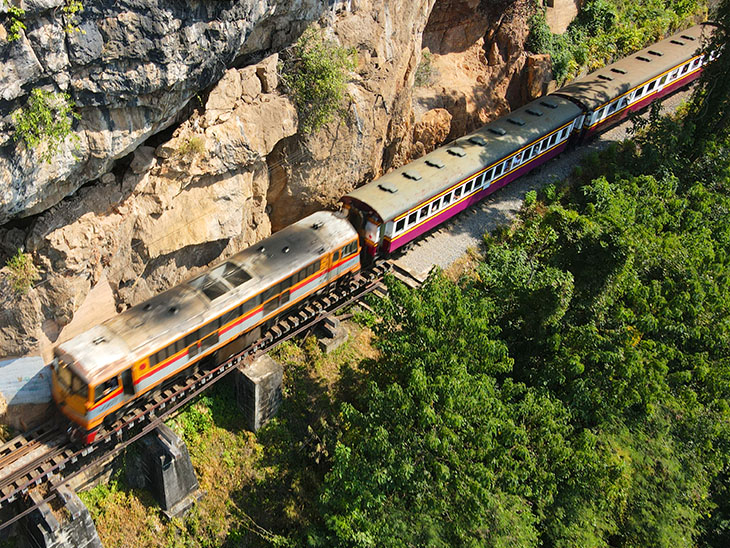 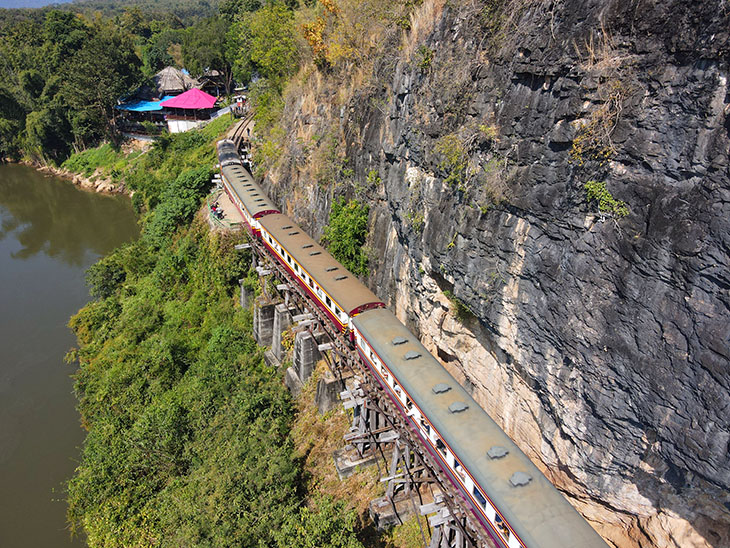 I did actually go back to the bridge on day 5 of the trip because I wanted to get a video of the train crossing the bridge, rather than photos. I parked late afternoon in the same field as a before, prepared the drone, and then decided I had plenty of time before the train arrived. A senile moment ensued. I had the wrong time in my head, and was part way through a three day old sticky bun when I heard the train’s siren. Maxie was deployed, but too late.

That means I’ll have to go to Kanchanaburi yet again. Tough life.

One thought on “Kanchanaburi… The Best Bits Part 3…”