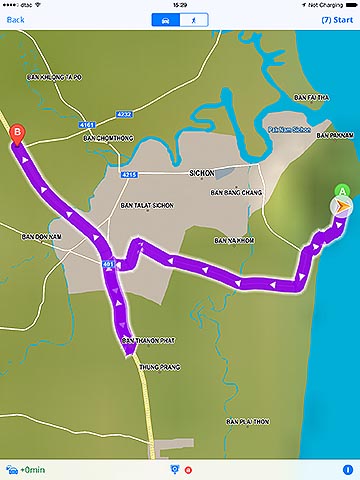 She’s actually the person described somewhat tersely as “English (American)” by Sygic’s GPS software, and she lives – usually – inside my iPhone, which I can attach to Bert’s dashboard. But, she can also live in my other devices, and I swap her around on an as-needed basis.

Why is she called Ms. Chuckles?

I honestly can’t remember! She gets on my nerves from time to time – trying to send me the wrong way down a one way street, or incessantly telling me to “Make a U-Turn if possible” in places where it clearly isn’t possible – so I guess I thought if I gave her a cutesy name I’d be less likely to through her out the window. So far so good. In fact, when she’s really nice to me, I’ve been known to get quite familiar, and just call her Chuckles.

As an aside, I can recommend Sygic. I’ve tried other apps, but I think Sygic is the best.