A Trip To The Other Side.

What’s the “Other Side”? Well, I consider the east coast of this part of Thailand to be “My Side” and so – you guessed it – the west coast is the “Other Side.” The last time I went over there was the very enjoyable trip to Laem Sak in Krabi Province.

I’ve been waiting for the weather to clear before going over there again. I didn’t care about the forecast for Khanom, it was the one for Khao Lak that mattered. Khao Lak is further north than Krabi, in Phang Nga province, but still accessible in a day trip.

A few days ago, the forecast for the following day said “Sunny and Beautiful.” Strange, I thought. I don’t think I’ve ever seen the word “beautiful” in a weather forecast. I’d better go and experience some of this beautifulness.

So, the day trip was planned, the eToys that guide me, camera, snacks, water, and a few spare clothes were all prepared, ready to be thrown into Bert early next morning. Taking spare clothes on a day trip may seem strange, but imagine slipping in some mud, and being covered from head to toe in brown stuff while several hours from home. Easy enough to throw a change of clothes into the car. In this part of the world shirts get sweaty, and so far that’s all I’ve needed to change. But the one day I forget, will be the one I need them.

At around 7pm I decided to have a final check of the forecast, and horror of horrors, it said “Overcast with Thunderstorms.” What The Bleep. What happened to “Beautiful?”

Well, all days are the same, so I put the plans on hold. Until – the day before yesterday when the Khao Lak forecast once again looked good, even at 7pm – so plans were resurrected.

I’d planned a loop just to add some variety. I never like going somewhere only to have to take the same route home. And this loop looked like a no-brainer. Even Google Maps agreed…

I decided to take the more northerly blue route outbound, partly because there were things to see on the way, but also because the last hour or two of the return trip could be in the dark, and the end of the gray route is mostly straight, and so, and easier drive. Around here, it’s dark by 6:30pm any time of the year.

The first half of the trip was familiar territory. It was the road that leads to Ratchaprapa Dam – a place I’ve been a couple of times. But then it was up into the mountains and the Khao Sok National Park.

I knew somewhere in the mountains there was a lookout point, but the markings are only on Google Maps and not by the road. So, I sailed straight past a flat bit of gravel, thinking that would be make a good place for a lookout, and then realizing, “Oh, that was the lookout.” It was on a steep uphill section, so I was going slowly enough to make reversing possible. Well, it was possible for me, but a few other road users were less than impressed.

It was only about 9am and the clouds and early mist had not burned off. In some photos that kind-of spoils the view, but in others, it adds to the effect. Swings and roundabouts… 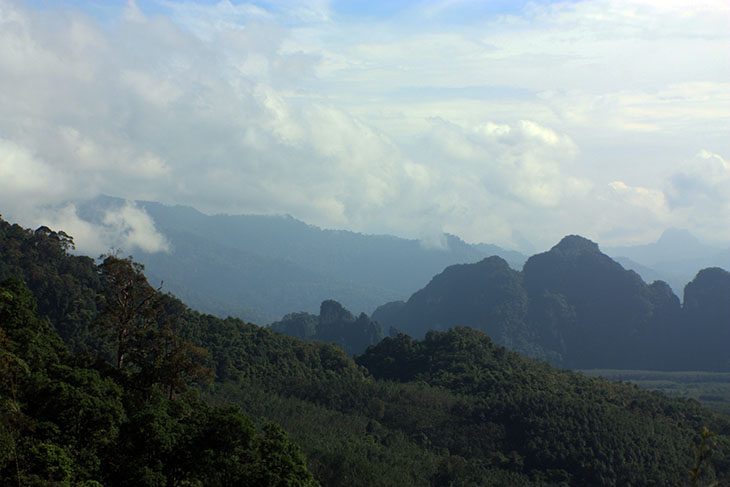 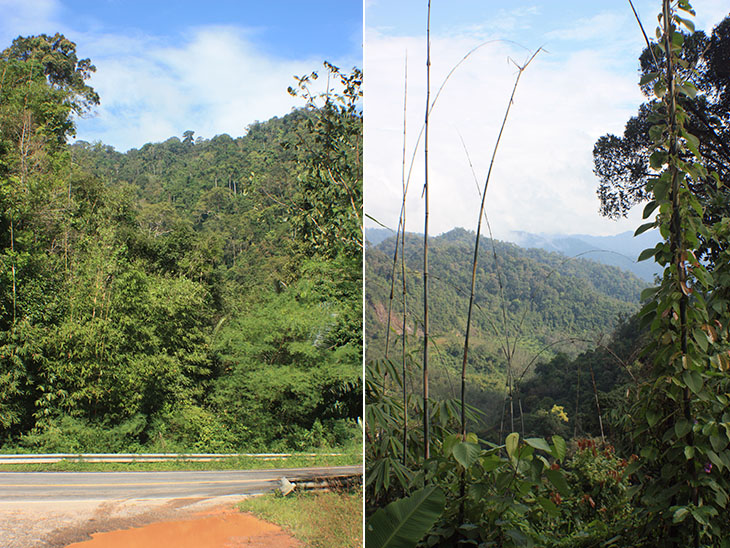 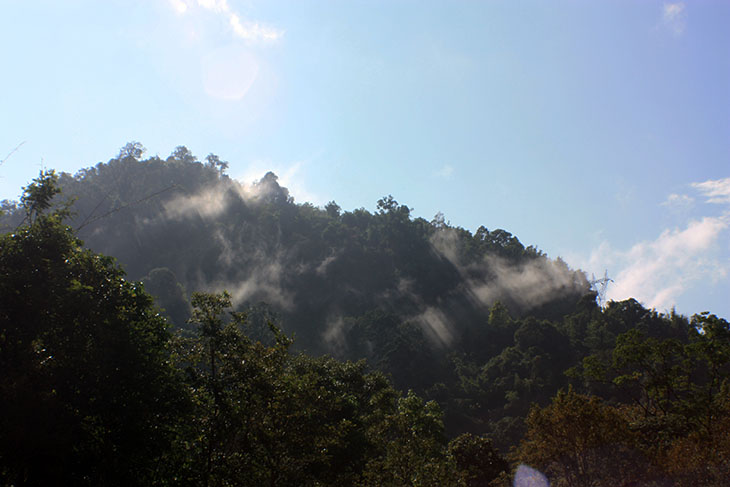 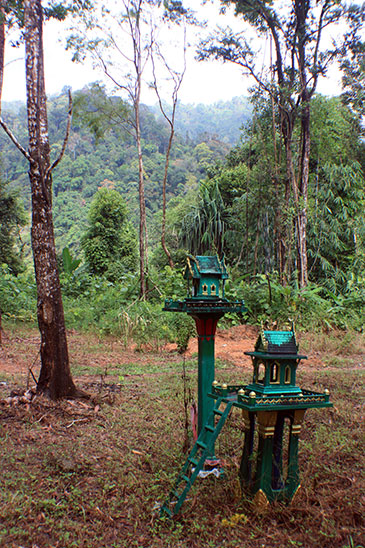 Someone’s ancestors have a nice view…

From there it was an easy drive down to the coast. The Khao Lak region is basically a 25km strip of sand, with the main road running about 1km inland, and lots of small roads, many not paved, leading to the various beach areas. But I started in the small town of Bang Muang which, a few kilometers away, has a small ferry and fishing port… 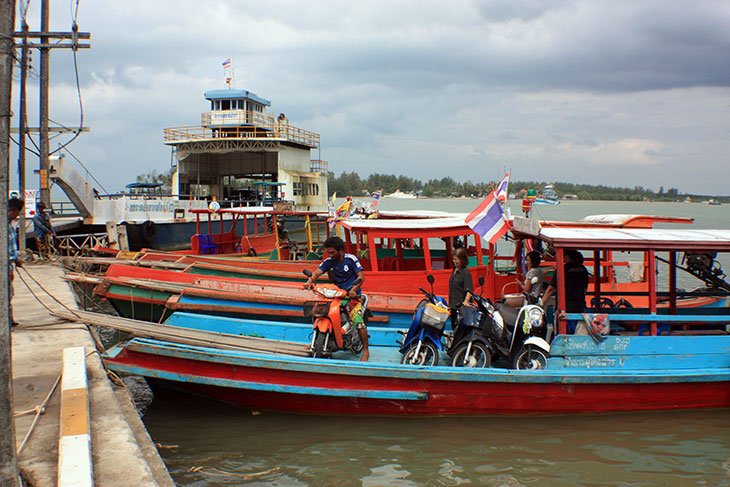 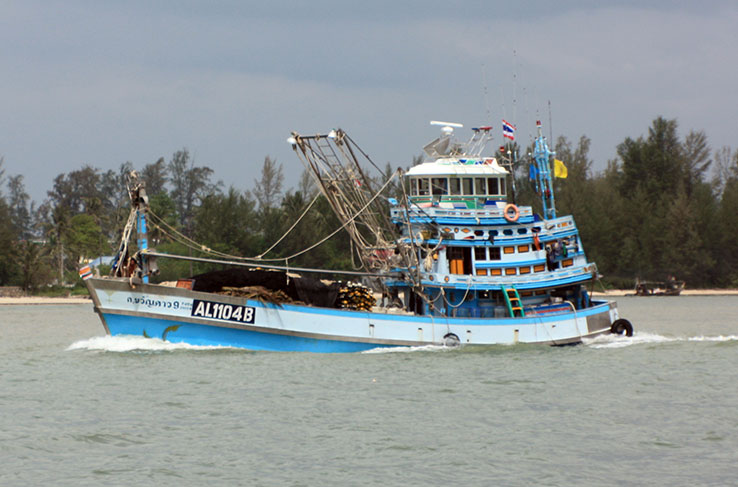 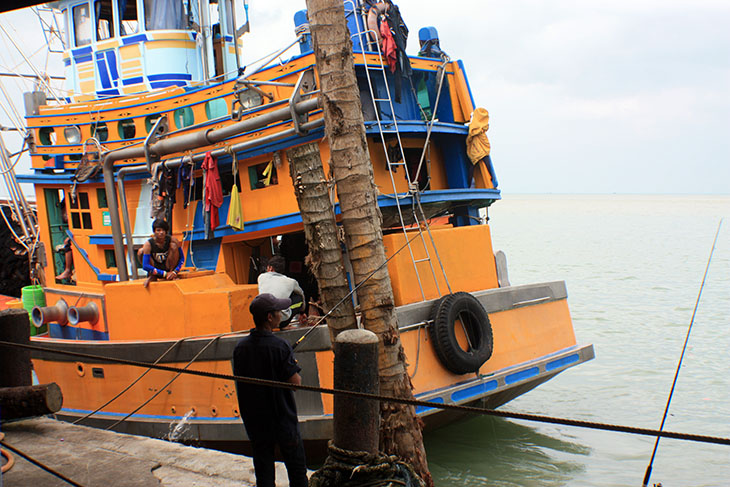 …before moving on to the beaches… 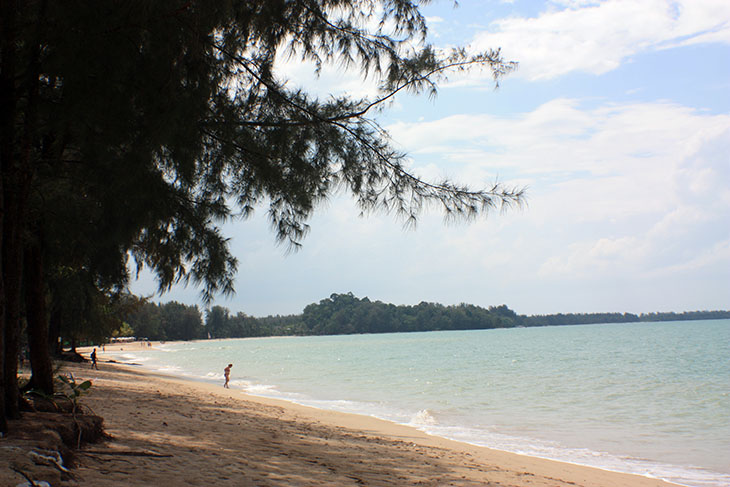 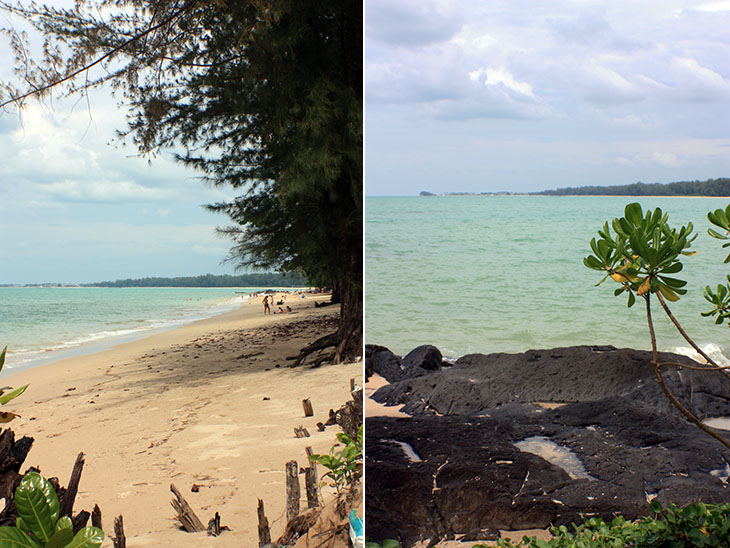 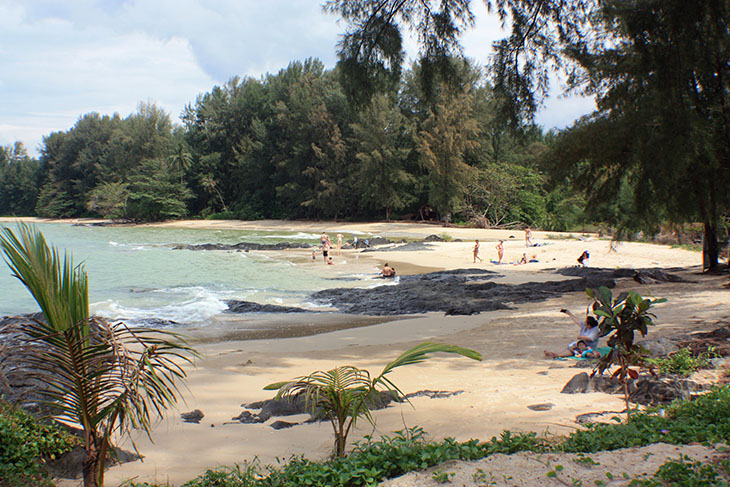 Above are Pak Weep and Bangsak Beaches.

On the way down the coast, I looked for something Google Maps refers to as the “Everton-Elephant Football Stadium.” As an almost lifelong Everton fan, I decided it would be a fun thing to discover. But at the specific GPS reference, I did find a soccer pitch, complete with grandstand of-sorts, but no mention of elephants or Everton Football Club… 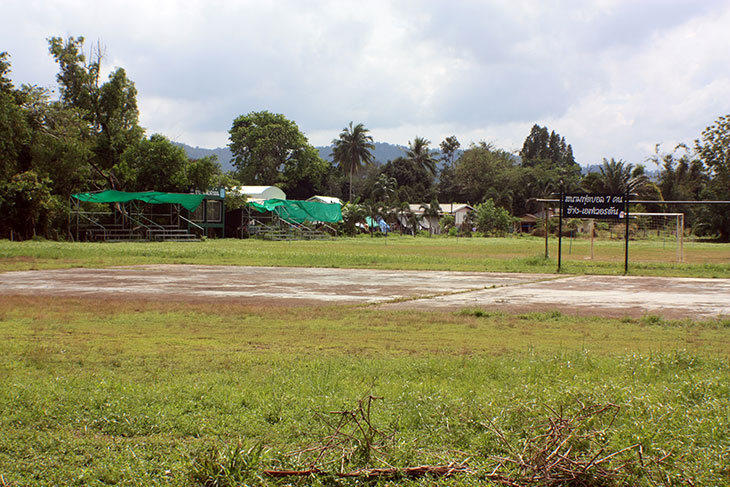 I’d planned on finding a small beachside restaurant in order to have lunch with a view. But the whole area was overflowing with pink puffy farangs, who seemed to have filled any nice-looking restaurant to overflowing point. Not my idea of fun.

So, there I was, looking at a rare, quiet, smart-looking restaurant on the beach, and wondering where to park, when a security guard waved me into a private parking lot, while making eating-type gestures and pointing across to the restaurant. I figured this was a good deal. Solve the parking and eating problems in one swell foop.

Apparently I was in the five-star Sarojin Hotel. I don’t normally frequent such places, and never saw the hotel, which was tucked away somewhere behind where I’d parked. But the restaurant prices weren’t five-star, but then, neither was the food. My Pad Thai was pleasant enough though, and the surroundings were relaxing, which was what I needed for a while, having been on the road roughly six hours… 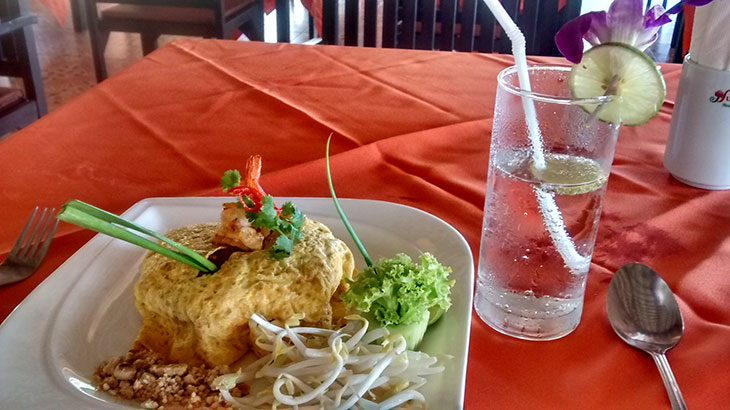 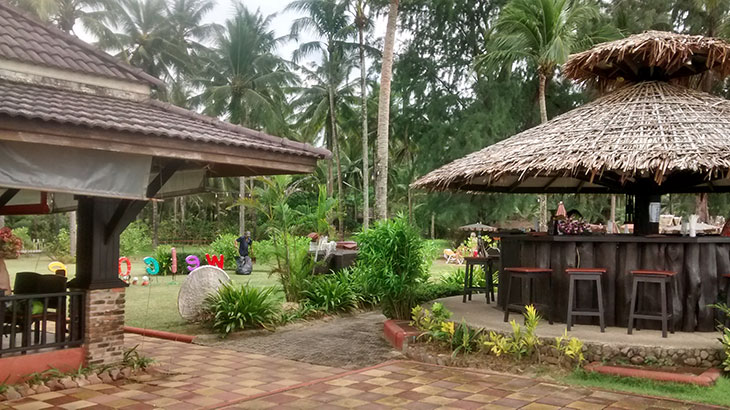 Now, at this point in the story, I know I can’t fit the whole trip into one article, so I’ll settle for painting the broad brush strokes.

I saw a lot more during the afternoon, and on the way home, but overall I have to say I wasn’t too impressed with the area. The beaches are okay, but far from the nicest in Thailand (which of course are on my side 🙂 ) everything looks a bit jaded and downtrodden, and the reason it’s overflowing with tourists leaves me quite mystified.

But I’m happy they’re all over there on the other side. I have to think it’s something to do with the proximity of Phuket airport, which has direct flights from several European points, and even more with a transit in the Middle East. The airport is at the northern end of Phuket, so it’s just a short wiggly journey up the coast.

Please check back tomorrow for a more detailed look at some of the things I found.