Continuing the theme of what I find different about living in Thailand, and yes, I know it’s only been a month, but it’s long enough to form some opinions. One of the main things is how I seem to get treated like a VIP or celebrity. Instinctively I thought “This is embarrassing. I don’t like this.”

But it’s a fact that older people are treated with a great deal of respect in Thailand, so once I become an “older people” maybe I’ll appreciate it. 🙂 🙂 Seriously; this is what I’ve noticed so far…

After a while, this began to grate. I felt like some kind of second-class citizen who they felt didn’t need to be acknowledged nor spoken to. So I politely asked Anna why they were doing this. “Oh” she said “it’s because they are terrified of you.” What?!?!

Okay, I’ve scared the sh*t out of more than a few rally mechanics in my time, but this is a completely different environment. I’m sitting very quietly, trying not to interfere in the conversation, and they’re terrified of me? I think the next time this happens I’m going to stand up very suddenly and shout “BOO”!

Actually I did that in the middle of a meeting about a month before I left Malaysia. A girl I’d never met before had a bout of hiccups. I scared everyone in the room, but it did cure her hiccups.

And then there’s the treatment I get in my local Big C supermarket. Actually it’s so small it should be called Little C, or Little Big C. Anyways… I imagine Thailand is like many places in the world, in that when you are buying loose items like potatoes or onions and the such like, you are expected to put the items in plastic bags, take them to the weighing person, and get then weighed, sealed and bar coded. Well, in my Big C, when the weighing lady sees me, she follows me around. When I’ve filled one bag, she grabs it, runs off to get it weighed, and then places it carefully in my trolley, patiently waiting for the next bag to be filled. And the process repeats itself until either I’ve finished shopping, or I see there are other people waiting to get items weighed, so I stop buying stuff for a while.

At the checkout, if the manager spots me waiting, he runs off to find another cashier to open a new lane just for me. And he personally places the bags in my trolley. It’s embarrassing, but he’d lose face if I complained, and well, I’m starting to enjoy it. Sure beats the heck out of waiting in line. No one else seems to mind. It’s like “He’s a farang. That’s normal.”

If I need a wide variety of products, my little Big C is just too small, so I have to travel some distance to a Tesco Lotus or Makro… and mostly the service is the same. Ah well, I can’t complain about getting good service everyplace I go. Sure beats the heck out of Malaysia where cashiers and store personnel seem to be trained to grunt, point, stare silently, and general be as unhelpful as possible.

Late last night I discovered the real problem. I ran out of water. The house has a huge tank that collects rain water, and there’s been no more than a few isolated and brief storms in the past five months. 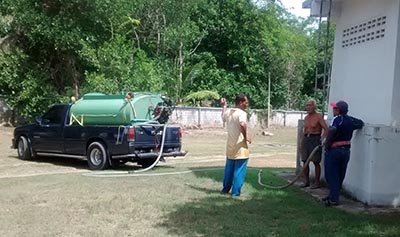 So this morning, after two missed showers, and feeling rather hot & smelly, it was time to “phone a friend.” A tanker appeared in about five minutes, and started filling what I assume is an underground tank. No wonder the pressure is bad upstairs. It took four trips to complete the job.

Now all we need is rain to keep it topped up. The government confidently announced the annual rainy season would begin June 3rd. That was yesterday. The sky is black. There’s lots of thunder. But no rain. 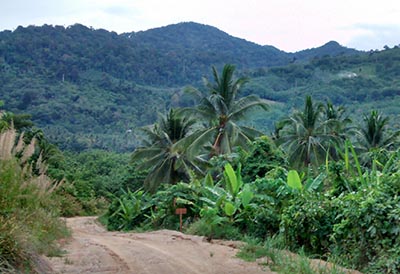 Assuming there is not a huge deluge I think it’s time for me to stop twittering and get back to exploring. Maybe Friday. I have a few places in mind, but no doubt I’ll get lost a few times before I find them. Some places need trips on roads like the one in the pic. No, I didn’t go down the hill. There was a warning sign I couldn’t read. But it was large white letters on a bright red background. I didn’t need any more warning than that. So, let’s see what Friday brings…