I know, I don’t usually put headings other than the title line, but apparently it helps Google’s sneaky search algorithms to index the articles. So from now on – headings it is.

Anyhoo, I’ve been looking for fans. A few times, when tootling around to the south of Nakhon Si Thammarat city, I’ve tried to find what clearly shows on Google (and other) Maps as a “Fan Making Village.” Well, I’ve gone along that road, and several back roads, many times, and not only is there no sign of anyone making fans, there’s no sign of a village.

As so often happens on websites, one person gets it wrong, and a hundred copy.

But there was a different fan I wanted to find yesterday – a stone one. The weather forecast said it would be a good day. The weather forecast wasn’t wrong. It has been wrong a lot recently, which is why I’ve been housebound for a while longer than expected. The storm I mentioned in a recent article did not mark the end of the monsoon season. Not by a long way.

A few days later a similar storm hit. Okay, there was little rain, and miraculously there were only minor power outages, but the wind was stronger, the waves higher, and they combined to do more damage. The coastline hadn’t had a chance to recover from the first storm. But the long range forecast now is good, so I’m hoping we’re done with storms until the next monsoon season.

I even managed a walk on the beach a couple of days ago, and was surprised to see it wasn’t littered with the usual plastic debris that in this era of wastage washes up all the time. I just read this morning that by the year 2035 there’ll be more plastic in the sea than fish. Around here it looks like 2035 has already arrived.

But … I hadn’t looked carefully enough. The high seas had washed it all straight across the road and into the fields on the other side, where no doubt it will lie for years, if not decades. Oh well, at least the beach will look nice for a day or three.

So yeah, yesterday I headed out early to find this mysterious fan-shaped rock. I’d read about it more than a year ago in a Bangkok Post article. “Major tourist attraction” they proclaimed. I could almost hear the drums and trumpets. So, shortly after reading that, I’d gone to the town mentioned in the article, looked every which way, headed up likely looking roads, and found nothing. Not a sign of, or to, the “major tourist attraction.” Coming soon, I figured.

But, a couple of months ago, using some back roads to return from the Ratchaprapa Dam I spotted a huge sign on the side of a building, just alongside a small road that headed into the hills. Ah ha, I though. That must be the road. At the time, it was late in the day, so I made a mental note to return soon. “Soon” was yesterday.

The rock is somewhere near the small town of Khirirat Nikhorn, which is about forty minutes west of Surat Thani town and ninety minutes from home. I’d known that when I was playing Hunt The Rock the first time. The Bangkok Post article had indicated the rock was 15kms from Khirirat. But unfortunately that town is on a crossroads, and the article hadn’t said 15kms in which direction.

So yesterday, eventually I found the large painting… 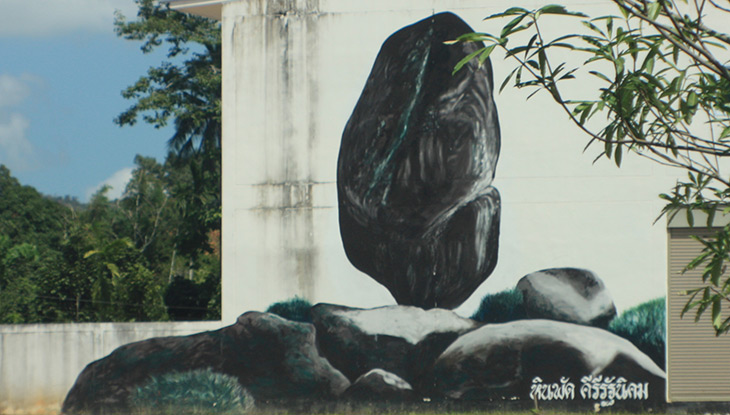 Not hard to miss, eh? Except you can only see it when travelling east, and I was going west. Then I found the road, and headed up it. That divided into many smaller roads – with no signs – and pretty soon I was in the middle of nowhere, and in an area with no rock, and no hills to put it on. Hmmm. 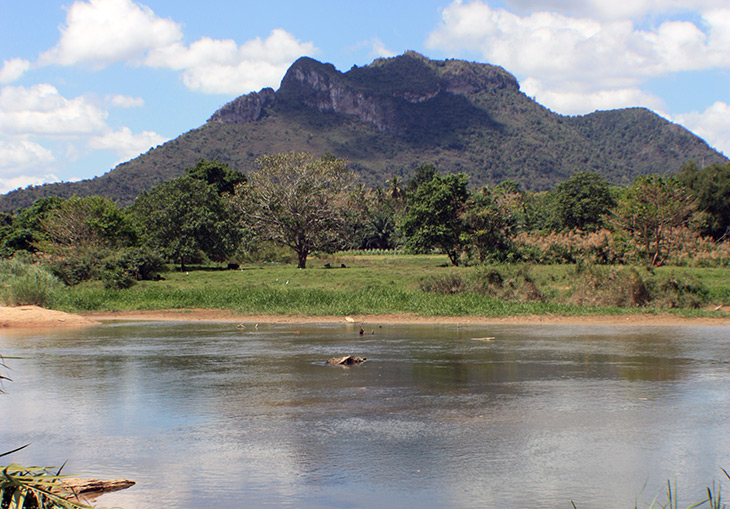 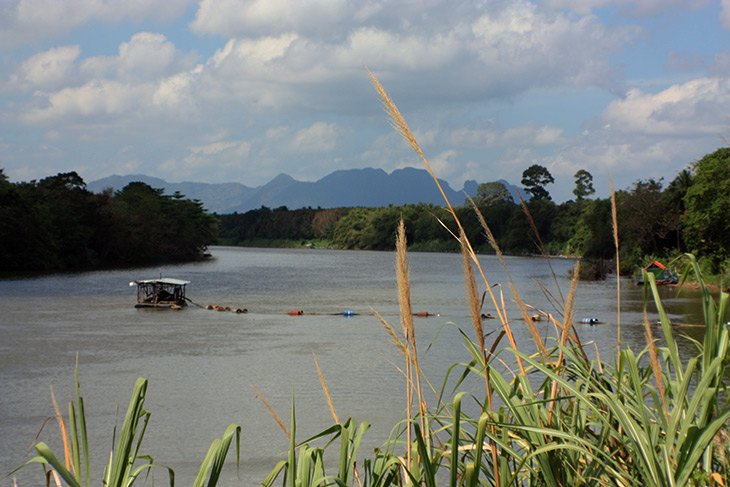 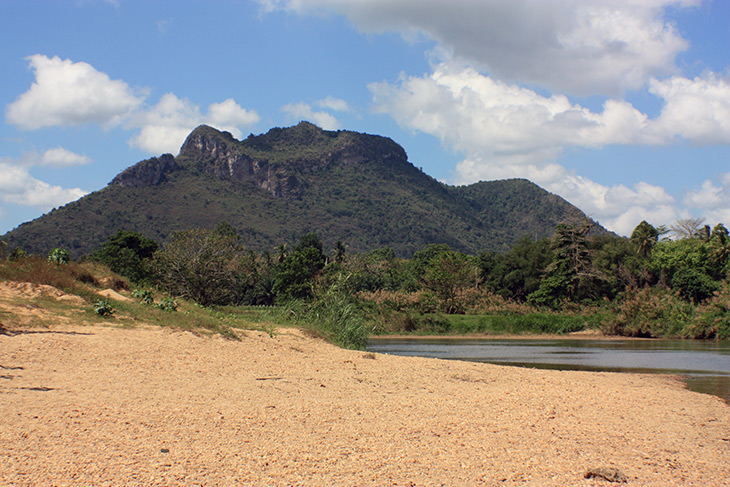 And while I was doing this I realized a lady in pickup truck was shouting at me. “Are you lost?” So I explained I was looking for Hin Pad, so she said “Give me 200 Baht and I’ll take you there. You can follow me.” The idea of having to pay to get someone’s help didn’t seem quite kosher, but by this point – over the two trips – I’d probably wasted a couple of hours looking for something I didn’t even know would be worth looking at, so, I agreed.

Even she had to stop a couple of times to get directions, but it seems the road to the rock is a good 15kms to the west of Khirirat. At which point, there are actually signs. They don’t really serve much purpose other than to say “Yes, you are in the right place.”

So, the lady left, and I headed off up the narrow concrete road. This started going steeply up hill, and with dust on what was clearly freshy-laid concrete, I wasn’t sure I was going to reach the top. After a while, I arrived at the point where the concrete was actually being laid, and had to abandon Bert – much to the amusement of the concrete workers, who ejoyed seeing me trudge up a thirty degree inclined dirt road at midday and 34°C temperatures.

This had better be bloody worth it, I thought. It was.

The track got narrower and steeper, with only guesswork to help me choose the right track, but eventually I saw this… 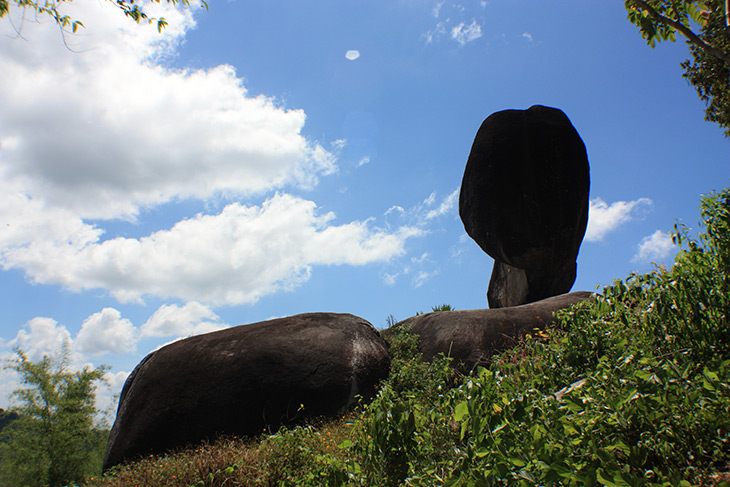 And here’s a gallery of other views…

Pretty impressive, I think you’ll agree. And with great scenery too. Plus of course, no tourists. The sign said I should rub the rock and wish for something. Well, with a strong wind blowing, I wished that the rock would not fall on me. And guess what? It worked. It was a miracle I’d found the rock, and a miracle it hadn’t fallen on me. Can you sense the sarcasm?

So, concrete delivery was briefly halted while Bert was turned around, and we headed off back down the hill. Damn, it was slippery. I hope they clean off the dust before hordes of tourists arrive; or least, one or two. Part way down the hill I stopped, or thought I had. But with my foot hard on the brake pedal, and the handbrake applied – I realized I was still moving. Stupid anti-lock brakes.

Anyhoo, on the way down, I noticed another sign, which seemed to indicate that if I made a right, the road would lead me to another balancing rock, and a wat. Now, this road could have used some concrete. It was a case of keeping above the ruts, bouncing through a river, and heading steeply uphill. Too steeply as it turned out. So, eventually I had to give up. 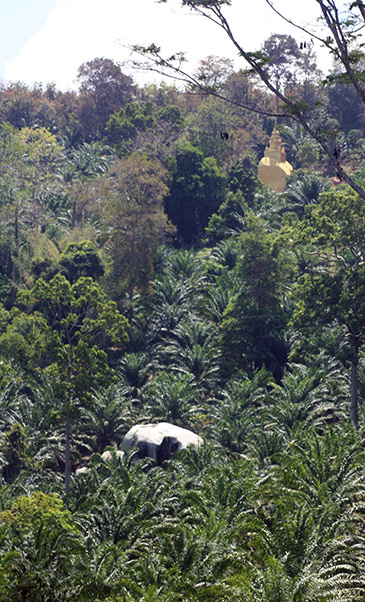 The photo on the right shows one rock and the wat – and I did reach the rock. But hey, it’s just a rock. No big deal. So, then it took me a good twenty minutes to negotiate my way down the hill – backwards. I really need Bert’s standard road tires to wear out, so I can justify buying something more suitable to mountain climbing. And then I can probably get myself totally stuck even further up hills!

Back on the main road I realized I still had time for some retail therapy, so I headed into Surat Thani for that, and a late lunch – more like “afternoon tea” in Starbucks. I’m not a great fan of their coffee, but their cream-filled cinnamon croissants are to die for.

Hmm, I must think of some more tours in that area.