Accuweather was predicting a sunny day, and at 8am I wouldn’t have argued with that. I needed to go down to Nakhon to get one errand out of the way, so I was out of the door by 8:30.

My errand turned into a bit of a farce. I’m trying to be as independent as possible, so I thought I’d find the Land Transport Department’s office to enquire about drivers licenses. Their websites are 100% in Thai, so I had to resort to a forum to ask where the office was located. Someone gave me a road name but nothing else.

I armed myself with a copy of the Department’s logo and their name in Thai script, but after a few trips up and down the relevant road, stopping regularly to compare names with paper, I had to give up. This is only step two of many, so eventually I’ll have enough material for an article or three. And sadly, it seems I’m going to need some help.

By this point I was south of Nakhon, so I decided to head back to the small riverside village of Pak Phanang. If you remember, I’d been trying to find a small sandstone Buddha which is ancient and worth seeing. I’d failed, and surmised he’d gone to lunch. 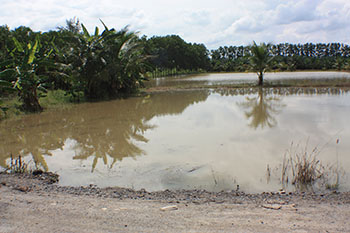 Anyhoo, I chose a – how shall I say? – scenic route. It ran alongside a river, which thanks to the recent rains, meant road and river were at the same level. And unfortunately the river was eventually higher than the road.

I’m not averse to driving through water, but I couldn’t see what was road and what was river, nor where the road re-emerged, so reluctantly I turned back. Real men never turn back!

Making a U-turn without falling in the river was a challenge.

However; if I hadn’t turned back, I wouldn’t have found this… 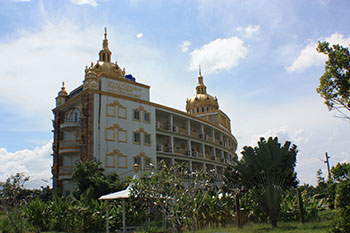 Mosque? Wat? Offices? Apparantly Sakonnakhon Collage (sic) according to Google Maps. Quite a place, and still under construction by the looks of things. I hope they have as much money for computers as they do for gold leaf.

Eventually I arrived in Pak Phanang on more conventional roads, only to have the same problem as last time. Try as I might, I could not find the correct wat with the Buddha. But at least I have a theory. More on that below.

And so then the skies darkened rapidly, heavy rain began, and I headed back towards Nakhon. After a quick lunch, a quick shop in Tesco, and a quick drowning in their parking lot, I pointed Bert (my truck) towards home. Tesco has covered parking. But it’s covered with a highly porous canvas which seems to allow at least 90% of the rain to come straight through. This being Thailand there’s no point even wondering why.

So, I’ve just finished doing some Googling to try to locate the evasive Buddha statue. And guess what… According to a Bangkok Post article, and others, there’s a wat with the same name in Chiang Mai, about as far away from me as you can get while still being in Thailand, and it has a red standstone Buddha with an exact same description. I think some of the websites offering tourist advice have just copied the info about the northern wat into the pages for the southern wat. So Buddha had not gone to lunch after all, he’s been happily living in Chiang Mai all along.

And so I wait patiently for the next time Accuweather predicts a sunny day, and hope for once, they’ve got it right.