Well, I could be going potty in the figurative sense thanks to the weather. The dark skies and frequent heavy rain continue, and if the long-range forecast is to be believed, they will persist for many more days. It’s keeping me indoors, leaving me with little to write about. So feeling rather short of material, I have to resort to writing about potties of the physical kind. The ones you sit on to perform various bodily functions.

A couple of months ago I asked my trusty translating friend to setup a meeting with the owner of the house I’m renting. Mostly to get his approval for some small changes I wanted to make, but also to discuss some problems.

One of the latter was the fact the ceiling in the downstairs bathroom looked like it was about to fall in. It seemed to me like water was leaking into the area just above the plasterboard, and I figured he’d rather deal with this before the whole lot collapsed. Nothing happened.

So last month when he came for the rent, I dragged him in to look. By this point the whole ceiling was sagging and I was sure it would only be days before the weight of water caused the inevitable. He said he’d deal with it immediately. Nothing happened. I have the impression “immediately” translates to the Thai phrase “sometime in the next three years.” 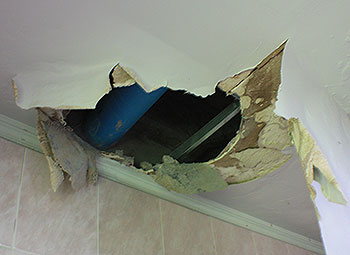 Yesterday the inevitable did happen. In terms of the amount of ceiling that fell in it wasn’t too dramatic. But looking at what was on the floor left me quite concerned. This wasn’t just plaster. There were large chunks of concrete. Anyone sitting on the potty would have been injured for sure.

So, today the owner turned up to collect the rent and I dragged him inside again. The tone of my voice was enough to convince him I wasn’t amused.

Another guy appeared. There was much discussion. Then the three of us went upstairs, I think so they could explain to me that the upstairs toilet was leaking and was the cause of the problem. The leak had loosened the concrete around its base, and so the concrete plus the accumulated water had come crashing through onto the downstairs toilet. Okay, I got the picture. 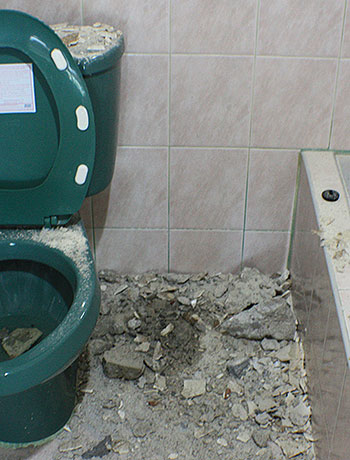 And no doubt this will all get fixed as immediately as was previously promised.

I’ve picked the latter option, partly because I don’t think it’s my job to clear up the mess. I shall sit there while listening carefully for cracking noises (yes, I said “cracking”) while having muscles tensed ready to leap out of the way in case I should suddenly get a sinking feeling.

Somehow I find this more unnerving than the 20cm centipede I found hiding in a downstairs room a couple of days ago. It’s dead now. But at least I learned something. After checking on Wikipedia I discovered centipedes are misnamed. They always have an odd number of leg pairs, and so can’t have exactly 100.

“How many did mine have?” you are wondering. Well, keep wondering. An odd number of seriously squished ones.