I suppose I should have used the more popular phrase “The Deep South” since I’m already in the south. My principal destinations were the provinces of Pattani and Narathiwat. But to get there meant going through Phatthalung and Songkhla so they were also destinations.

I’m no stranger to the deep south provinces, having travelled through them many times when heading to/from Kota Baru in Malaysia to obtain visas. But, I’ve never had a chance to use a drone, and I had several reasons for wanting aerial photos. This meant finding a three day gap in this year’s unpredictable weather. It’s just too far to go to look at the rain.

Anyways, I found a gap last month. Three days of almost cloudless skies were predicted … until … the day before I was due to leave. I almost didn’t go. But the middle day was my main shooting day, and the forecast seemed okay for at least that one day. And the forecast was right. Almost cloudless. Super sunny. Stupidly hot!

My first stop on the way south was Phatthalung, to see if the lotus flowers were blooming at Thale Noi Waterfowl Park. They were supposed to be a this time of the year, but they obviously missed the memo and the blooming flowers weren’t. Blooming. Aerial photos were not taken.

So I headed into the town to get another look at a lump of rock known as Khao Ok Talu. You may remember I was there in February. You can find photos at the bottom of this article. I mentioned then that I should have angled the drone’s camera twenty of so degrees above the horizontal in order to be able to see right through the hole. So this time I did. And you can… 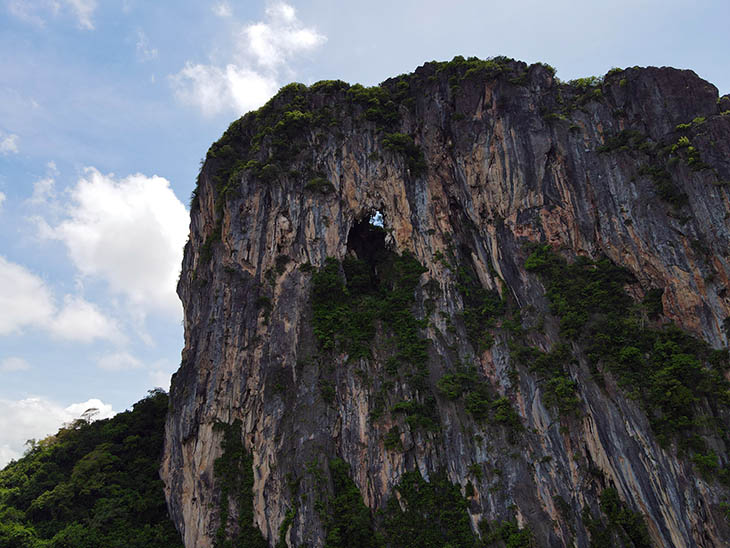 I also took a shot of Phatthalung town looking west… 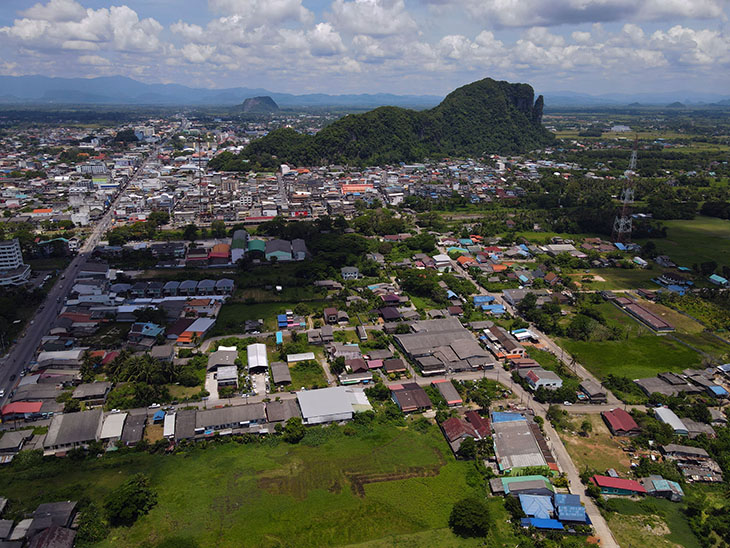 Figuring I wasn’t going to get any more interesting shots I asked Ms. Chuckles to get us down to Hat Yai in Songkhla province. But of course, she has a mind of her own, and we ended up on some twisty road trying to locate the main highway 4. This wasn’t wholly bad as along the way I spotted a river, did a quick u-turn, drove into a field and managed to get these photos of some unique fishing contraptions… 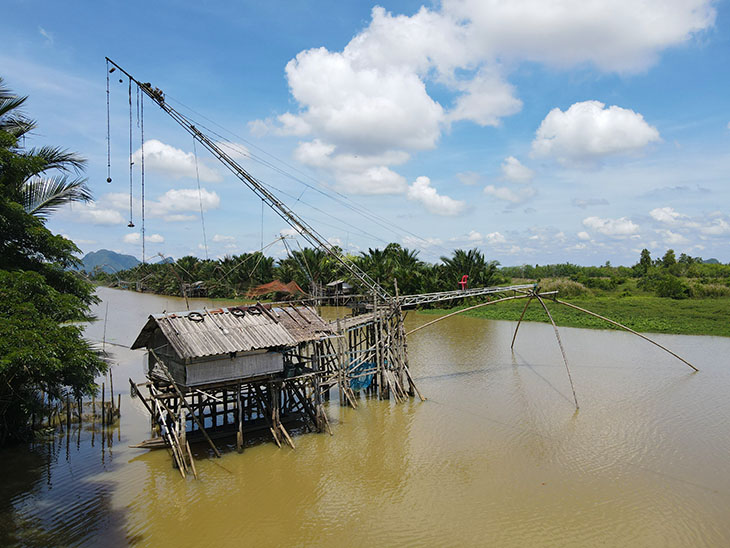 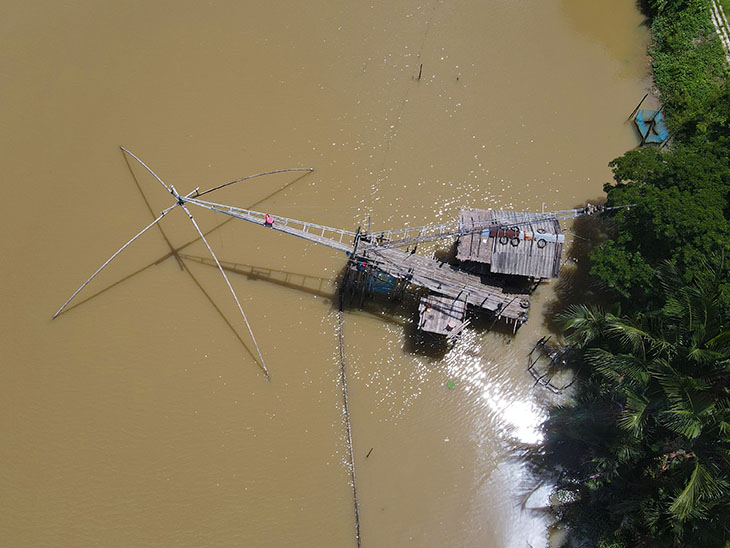 …along with the surrounding area… 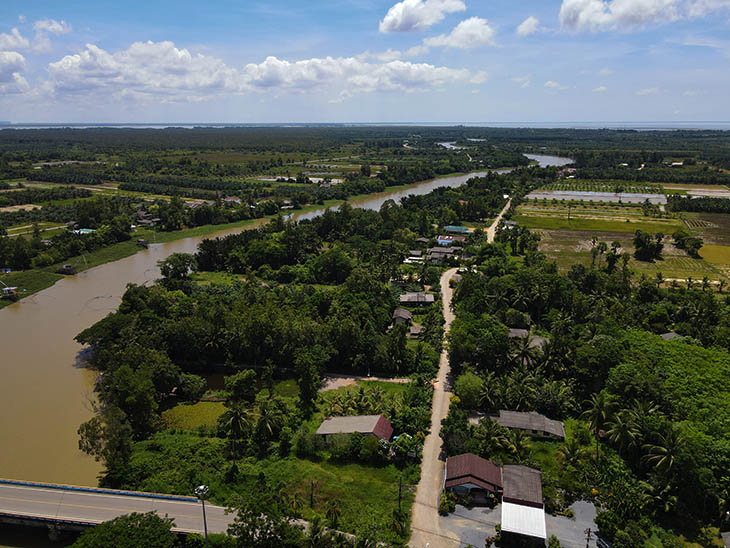 Once in Hat Yai I headed to the main park. Last time I was there the place was closed due to Covid. I thought it still was, but could see cars inside and eventually found one open gate. There’s a giant golden Buddha statue almost at the top of the mountain. You can see this from kilometers away. It seemed like a good subject for aerial photos.

But, Ms. Chuckles took me on one of her mystery tours, one where we passed the same restaurant five times, wasting more than an hour. Try as I might, I couldn’t figure where I, or she, was making a mistake, until on one pass around the mountain, I spotted a barrier. After closer inspection I discovered that beyond that was the remains of a road, now soundly dug up and impassible. I’m assuming that’s where I was supposed to go. Well, would have gone had there still been a road.

Long story short, now seriously grumpy and behind schedule, I decided to head down to Pattani, which was to be my “home” for the next two nights. But, at this point, I was stopped right by the Guan Yin statue, so she had to be a substitute Buddha! 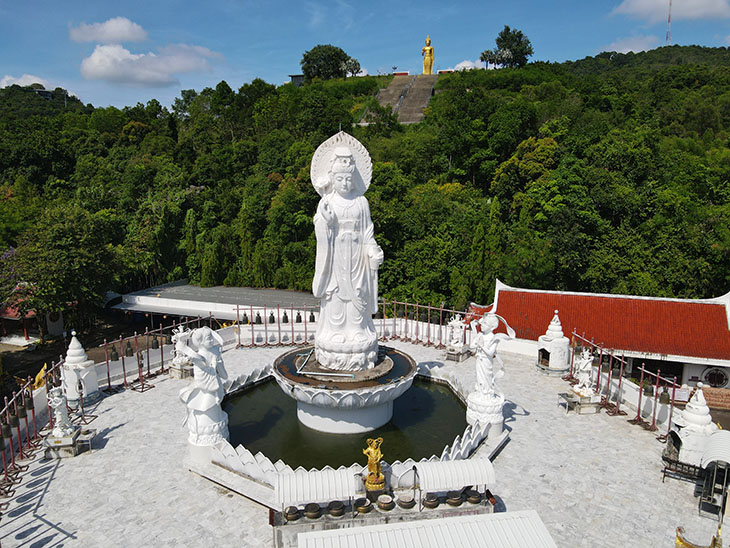 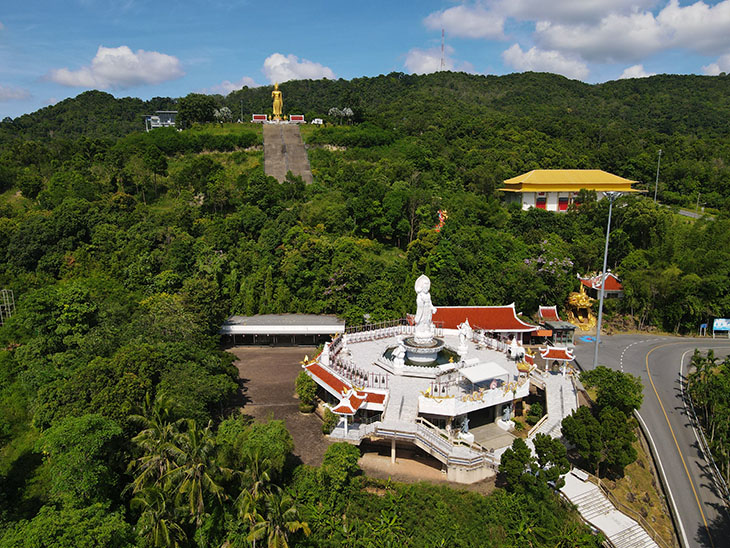 You can see the Buddha statue in the background. No doubt he was grinning, and thinking something profound about patience, the meaning of life, and stupid farangs. I vowed to get my own back by revisiting on my return journey and flying up from Guan Yin to the Buddha. Who needs roads? 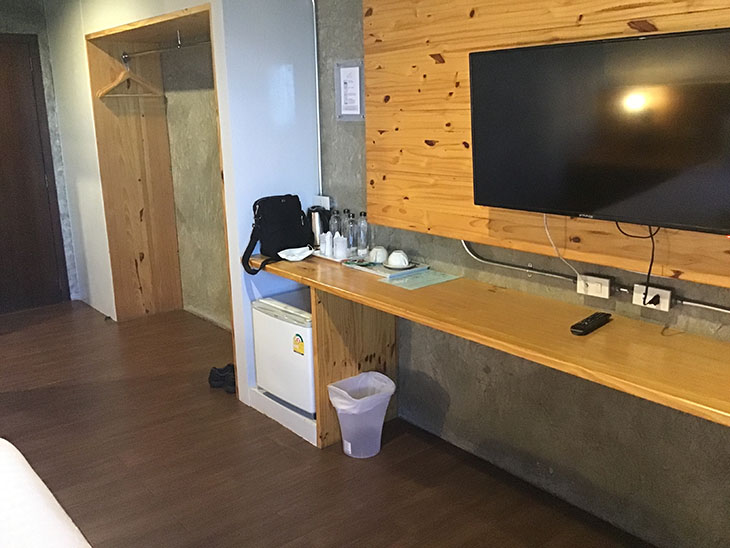 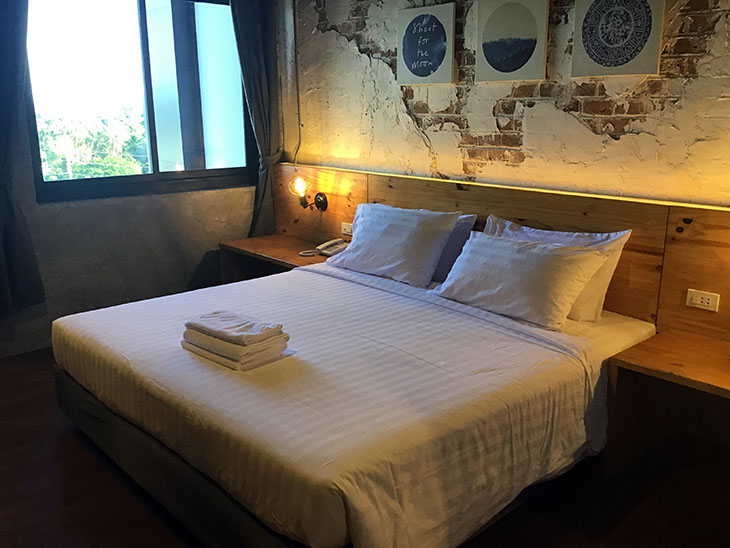 There were even light switches next to the bed, something I find strangely rare in Thailand. But; why oh why do builders slap the wiring on the inside? It’s like they finish the whole structure, and then think “Oops we forgot the wiring”… 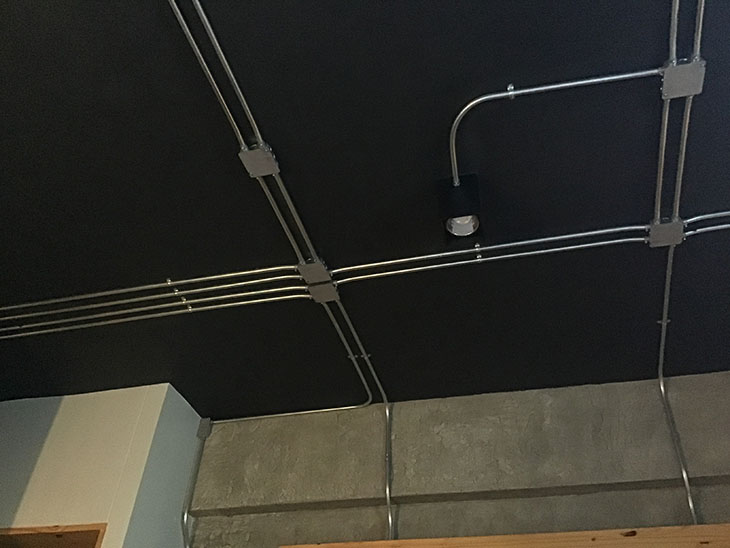 After a rest, and feeling like it hadn’t been a bad day, I headed out to supper. Ms. Chuckles announced “The restaurant you are heading to may be closed.” What? Stupid woman. The restaurant was closed. Disaster!

It’s rare to find a good Indian restaurant anywhere outside the major cities, so I was looking forward to visiting not once, but twice. However; it seems in the Muslim areas of the deep south restaurants close during the fasting month of Ramadan. Had this been Malaysia, the place would have been open and overflowing, but it would appear Thai Muslims prefer to break fast at home with family. That seems like the correct way to me. I ended up at KFC.