…A Slice Of Burma Close To Home.

It was one of those weekends when it would have been criminal to stay indoors. So I didn’t. Sunny. Almost clear skies. Warm but not too hot. Perfect for droning except for one thing. It was incredibly windy.

Shame. It’s been too windy for more than a week now, so I’m getting withdrawal symptoms. Well I thought, at least I can go and find new places to fly.

I’d found somewhere on Google Earth that I wanted to check out. And having visited on Saturday, I’m pretty sure it will produce some spectacular video. But I can’t be sure as it’s above ground. So I haven’t really seen it. It needs the drone to view it from the air. And that’s all I’m saying until I’ve checked it out properly, so let’s move on to Sunday…

Google Maps is an essential tool for me in finding new places to tootle. Looking around the area northwest of me, just into Surat Thani Province I spotted “Buddhist Temple.” Well, there’s no shortage of those, but I didn’t think this was one I’d visited, so tootling commenced. I also spotted a tiny road further north where I thought it might be possible to get some good sea views. Two birds, one stone, dozens of photos, but no t-shirt.

I headed out of Khanom for about ten minutes on the main road, before turning onto a more minor road for ten minutes. Then an even more minor road for another ten minutes before reaching a tiny road which lead uphill to the wat. I found some shade to park in which was easy because this was a large tree-lined compound. And deserted. Although I could hear voices in the distance.

Here’s what I saw first… 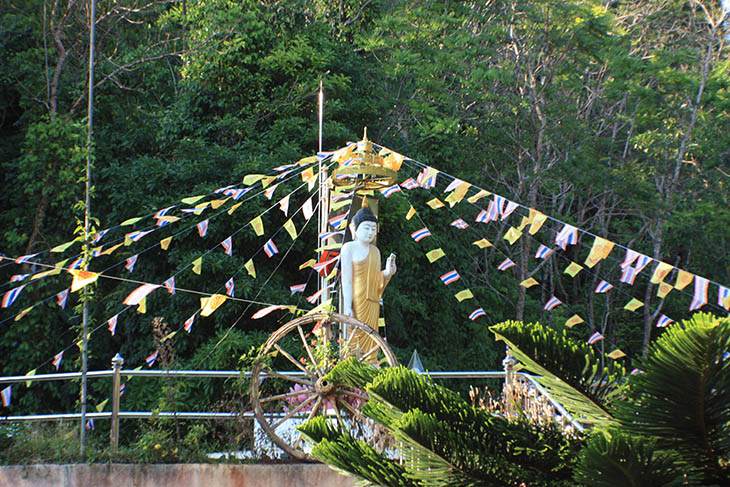 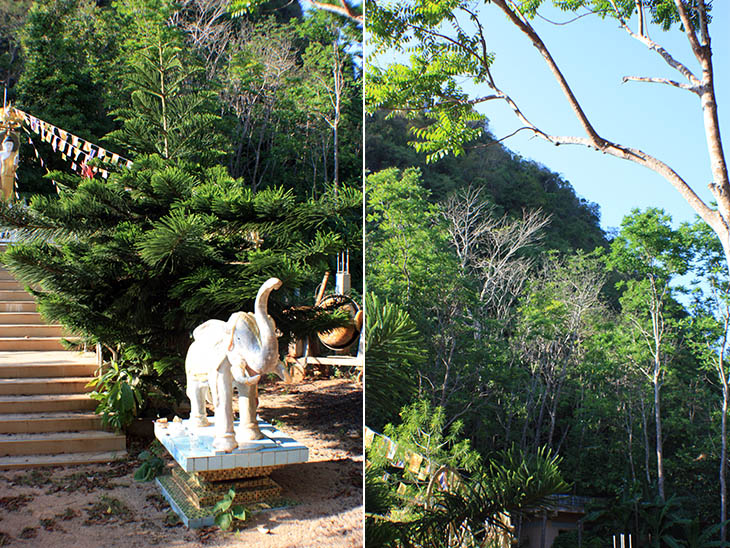 And then the inevitable stone steps leading to… 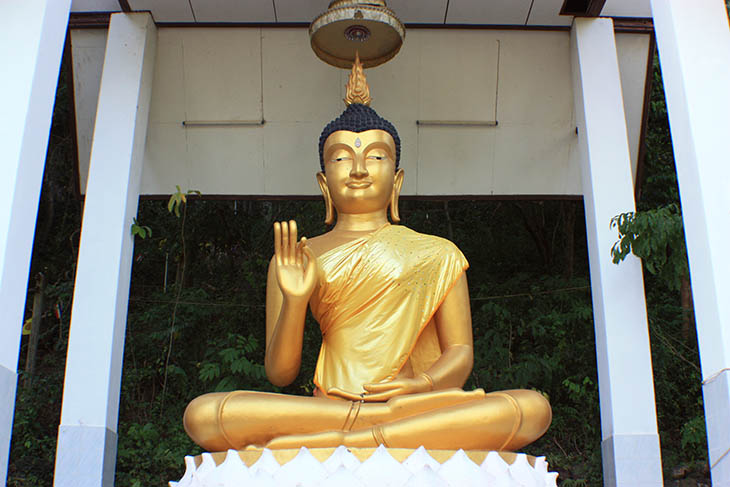 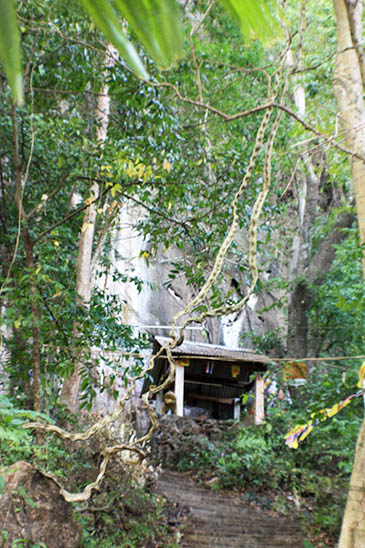 Then, guess what… more steps leading to… sorry, no idea. It didn’t look like anything of significance. At which point I thought “quite nice, peaceful surroundings, time to move on.” But one of the voices was no longer distant and it was talking to me. It belonged to a resident monk.

Our initial conversation wasn’t too productive, with me insisting that he was speaking good English, and him insisting he wasn’t, plus him insisting I must speak good Thai and me insisting I couldn’t. Etc. But eventually he said “You must see the big Buddha.” I thought I had.

So, with him playing tour guide, off we set. Up some steps, along a corridor bordering some storerooms, down some steps, up a gravel pathway with chickens and dogs, and past an open building where another monk was lecturing some cross-legged seated “disciples.” The best way I can describe this bare-chested fella is to call him triangular. Increasing rolls of fat down to his hips. Clearly he wasn’t subsiding on the normal early morning diet of boiled white rice. He looked more like he lived at the back of an ice cream factory where they gave him free half-hourly handouts.

But we weren’t done yet. More gravel paths, more chickens, a comment that “I think I have too many dogs” – he wasn’t wrong, and then up a hill to … tada … 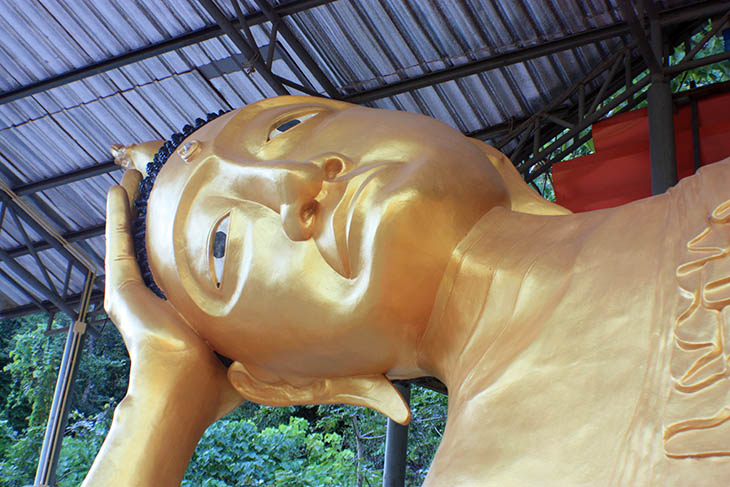 A Big Buddha. Plus a whole soccer field of structures – principally a giant chedi or stupa… 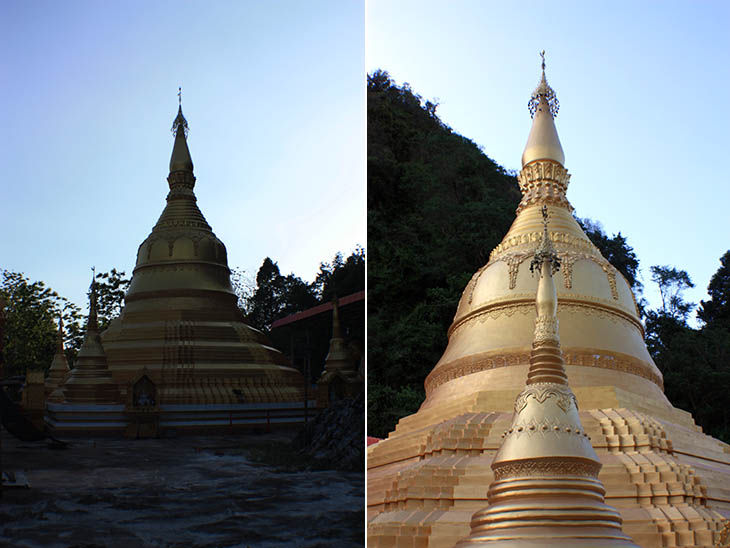 …all built, I was told, by a rich Burmese man from the Mon tribe. Which, if it is restricted to Burmese worshipers (and I doubt that it is) could explain why the place was deserted. On a Sunday afternoon. Placed in the center of Yangon this would be a major tourist attraction. But the nearest land border is a good five or six hours away.

And the Burmese connection would explain the Burmese sign on the giant gate, which with its adjacent pathway – the gate that is – wasn’t going to keep anyone out… 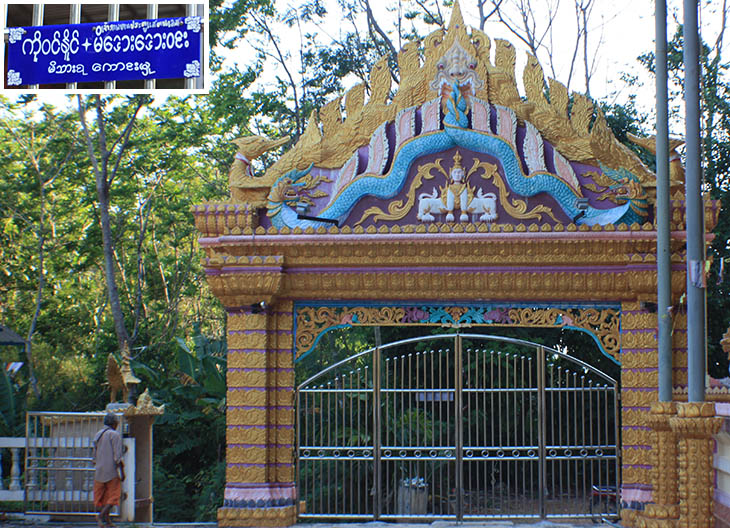 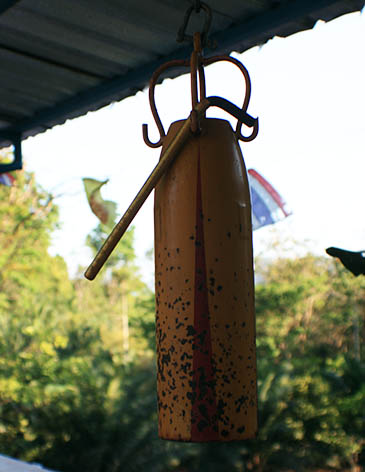 “Please strike the bells for good luck” I was advised.

There were at least twenty, all with the hammers rusted to the bells.

I tried two, before deciding that finding this place was enough luck for one day.

Aside from which, I was hardly likely to find a troupe of naked pole dancers.

At which point my guide disappeared. Oops, was he reading my mind?

One of the features of the area was the mini-wats – seven of them – one for each day of the week, all with curiously and cutely abbreviated or misspelled day names. Here are WED DAY, TUE DAY and SAT DAY…

And there was lots more to see… 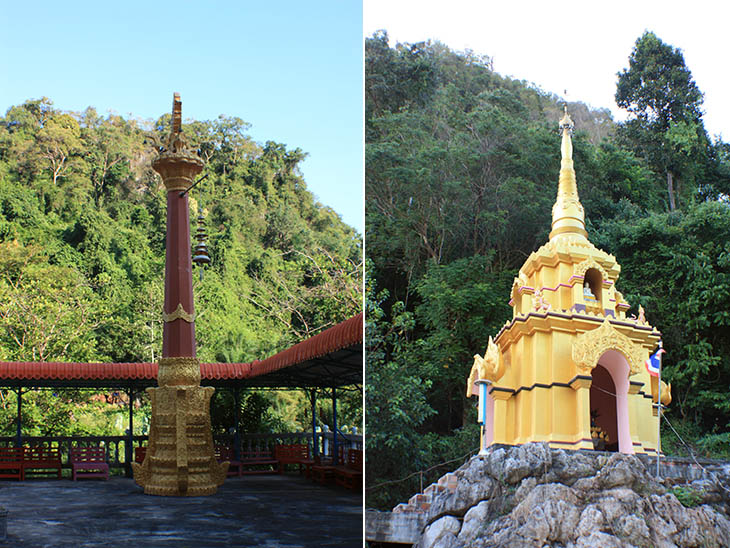 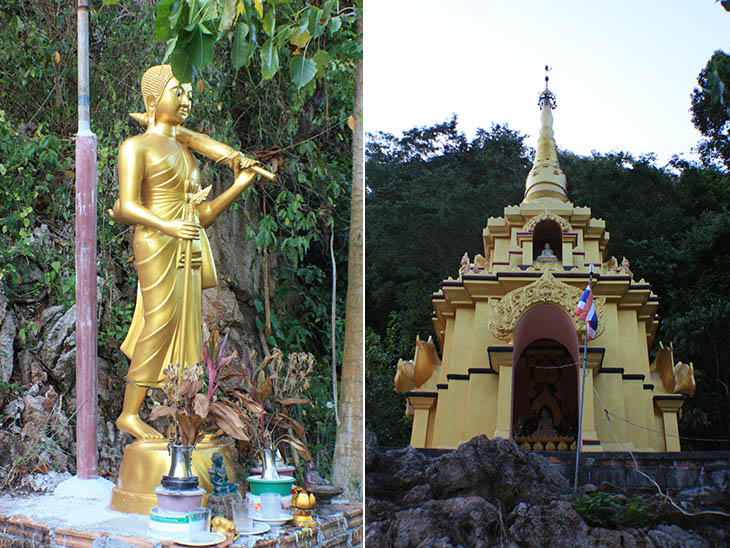 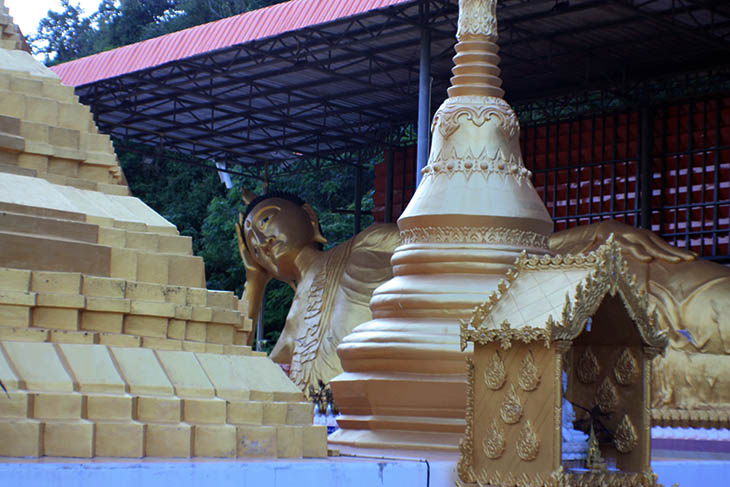 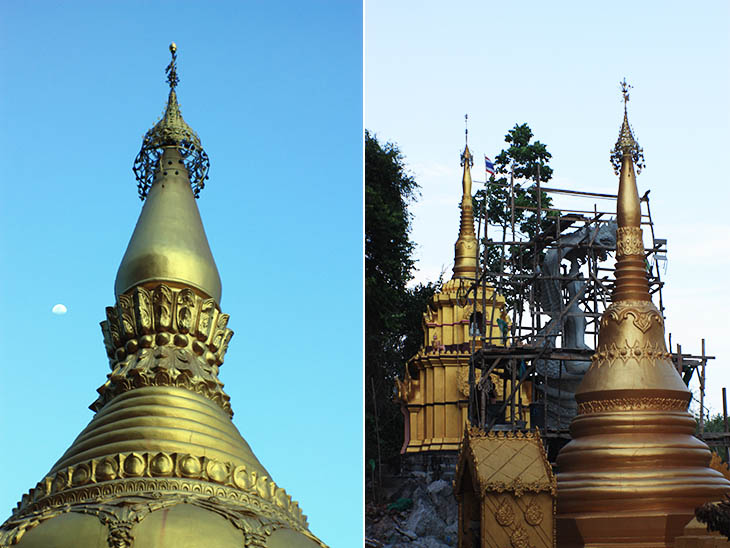 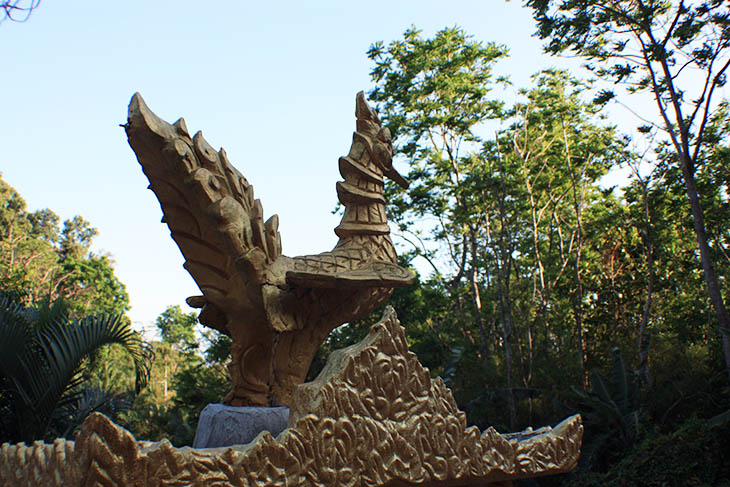 Some parts are still under construction and appear to have been abandoned, unless you look carefully and can see the two guys chipping away at something inside the wooden scaffolding. 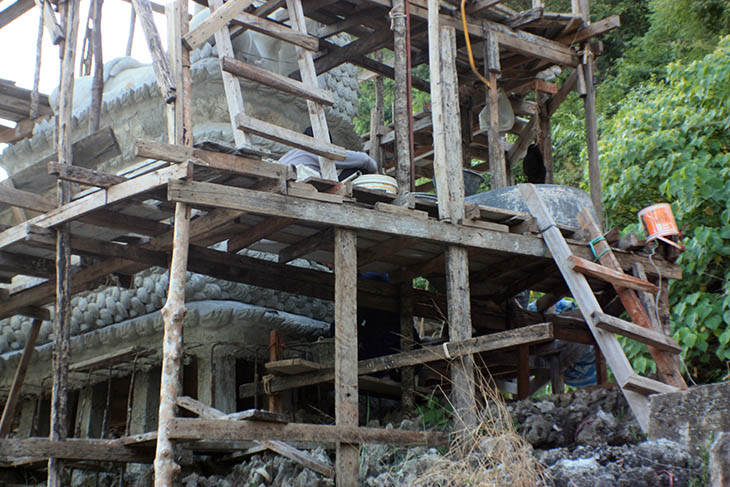 And that was it. An absorbing hour of wandering alone through a tiny slice of Burma. It was time to head home for supper, and a spot of Buddha-like reclining… 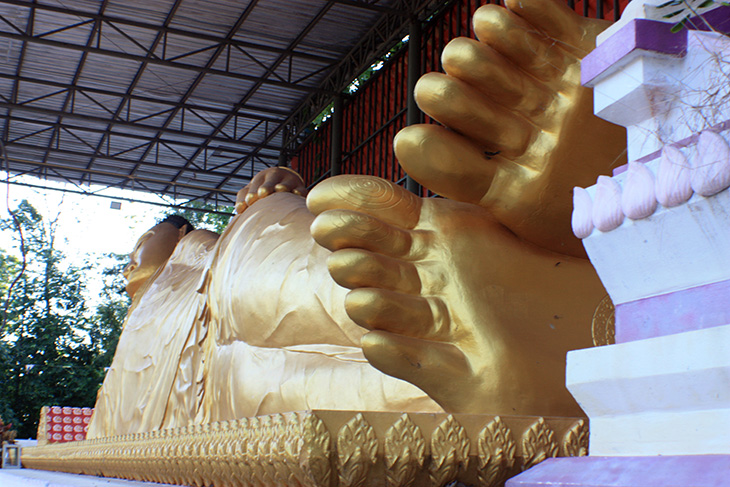 …but only one of us would recline with a beer.