As I mentioned in my last article… After leaving the Kook Ming Bakery I headed down into Trang town. I wasn’t really sure what I was looking for, so I wasn’t surprised when I didn’t find it. A polite way of saying there really isn’t anything of interest.

Worse than that, the place is decidedly grubby, grimy, greasy and any more “gr” adjectives you can think of. Ah, yes, “grotty” would be a good one. “Great” would not.

Trang is, not surprisingly, the capital of Trang Province, and as a result has a number of government buildings. I read somewhere online that these are quite handsome. Well, if forty year-old faded concrete buildings with peeling paint are your thing, you’d be in seventh heaven. I didn’t even reach first heaven. Wherever that is.

I drove around for a while thinking there must be something worth stopping for, but if there is, I didn’t find it. And it’s not a big place, so I don’t think I missed much. I also read that the food is supposed to be good, but it wasn’t really food time. And the coffee. Yes, there is the coffee. Trang coffee is famous. But I didn’t see anywhere I would want to step foot inside.

As a result, photographs were not taken, and the only time I stopped was so Ms. Chuckles and I could decide – where next. Kan Tang was the answer – sometimes written as Kantang.

It’s about 25kms south of Trang town. An easy drive. It’s on a river, close to the sea, and for some strange reason has a train station. There are direct services to Bangkok, 850kms away. With a population of not much more than ten thousand this seems a little unnecessary, but it’s defintely a GoodThing as the station is probably the only building worth seeing.

Built in 1913, and not changed since – except for a lick of paint – it’s really quite cute… 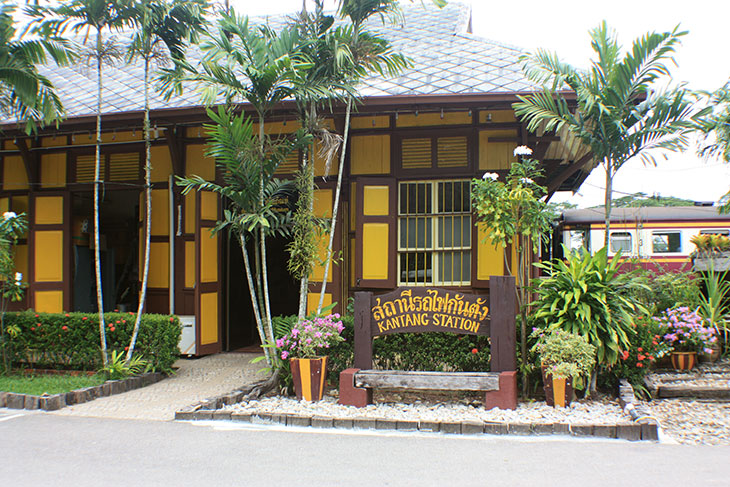 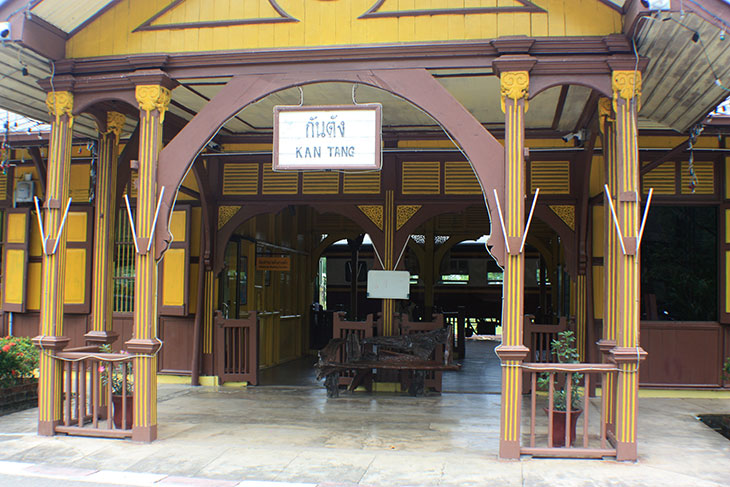 …but not exactly the busiest station on the planet… 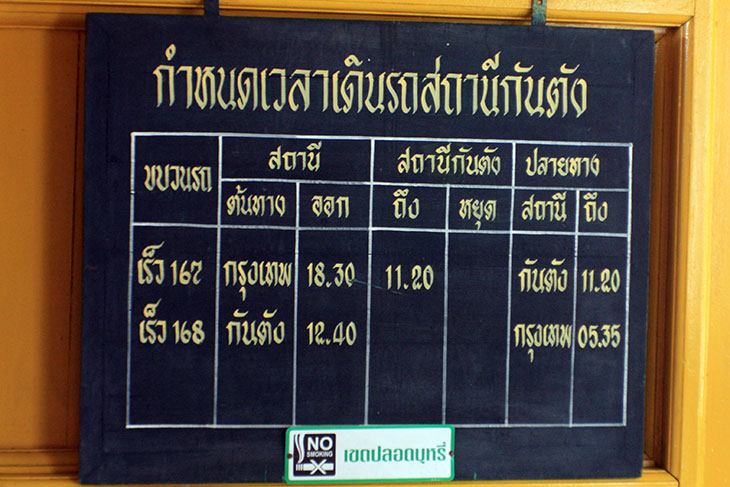 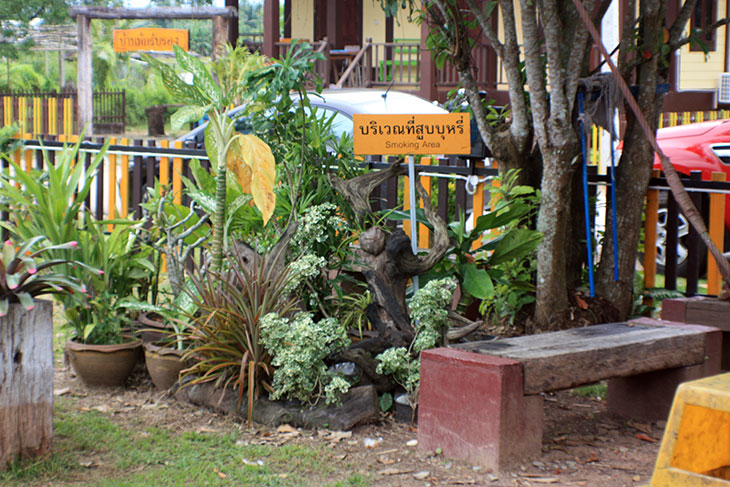 Nice of them to bring a train for me to photograph… 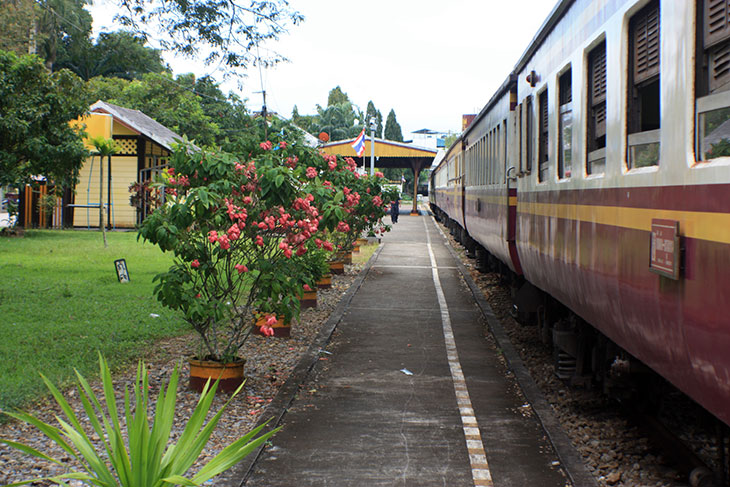 And here are the sole contents of the station museum… 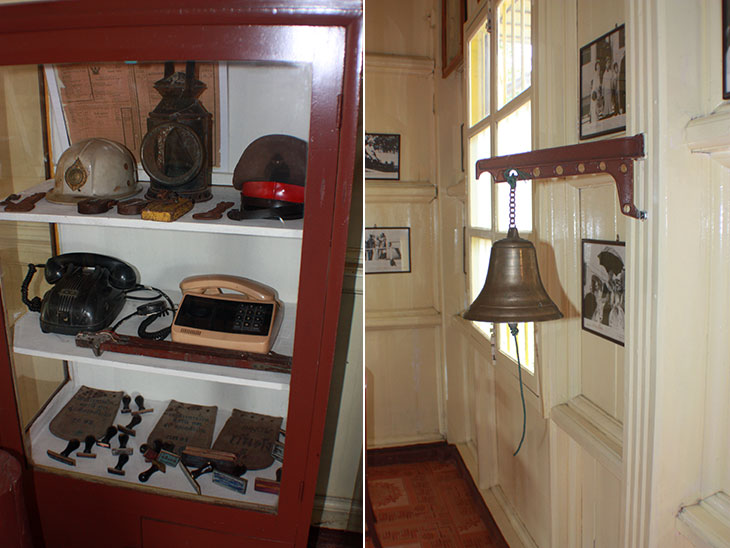 From there I headed 500 meters or so down to the river. The railway line used to reach to there so they could trans-ship cargo from the boats. That would make sense. But now it doesn’t.

It has a few fishing boats, a car ferry across the river, and not much else, except for a famous seafood restaurant – now closed… 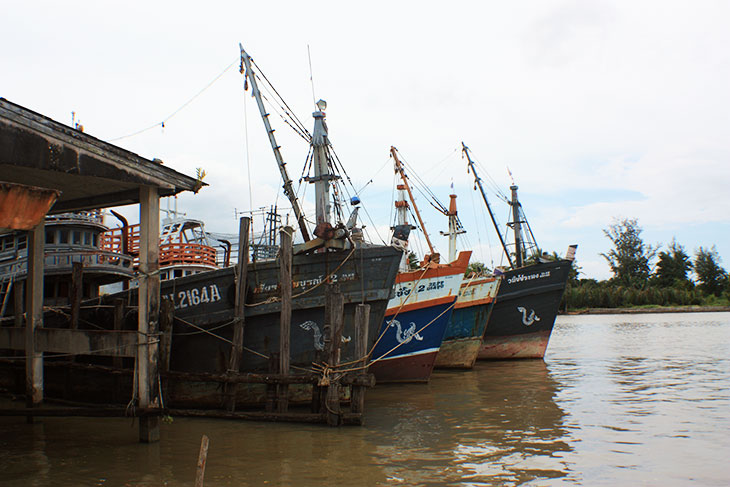 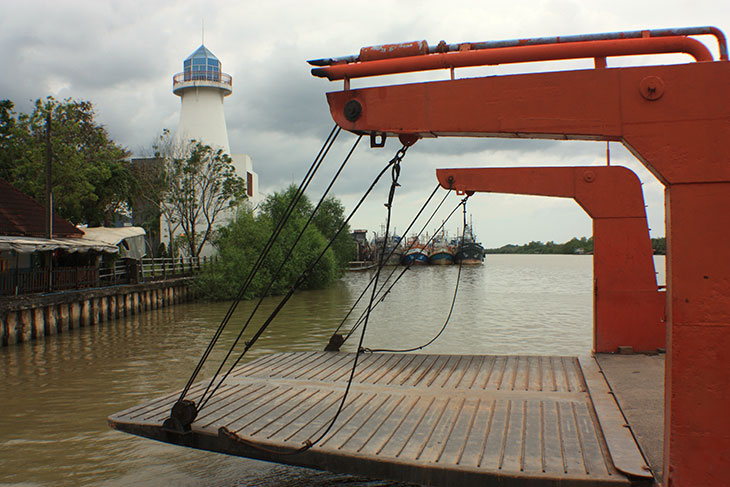 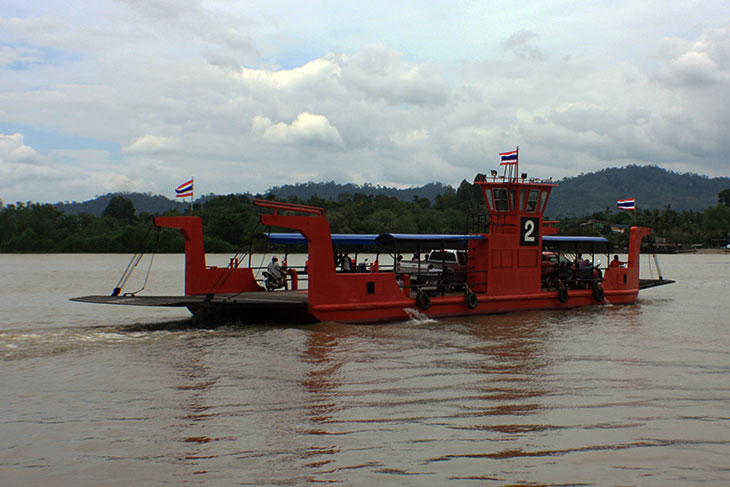 It’s really just a smaller version of Trang town, i.e., not too pretty… 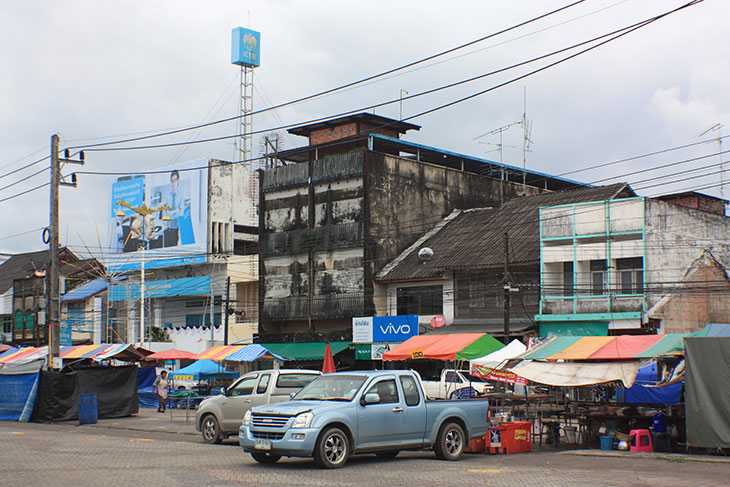 Next, it was back into the town to visit the Phraya Ratsadanupradit Mahison Phakdi Museum… 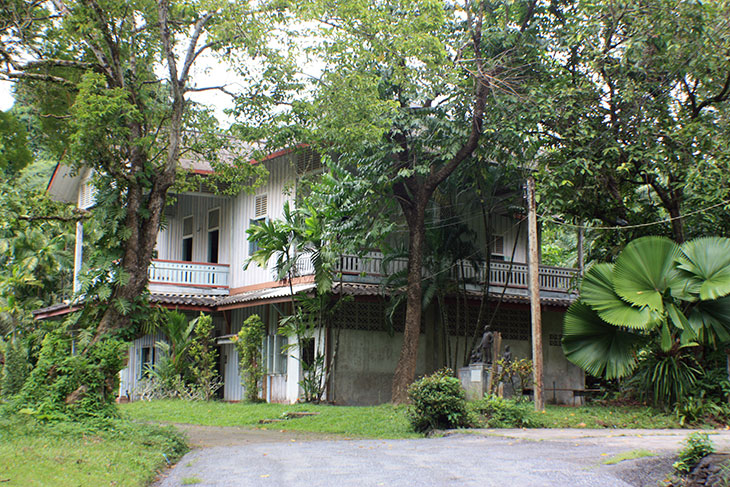 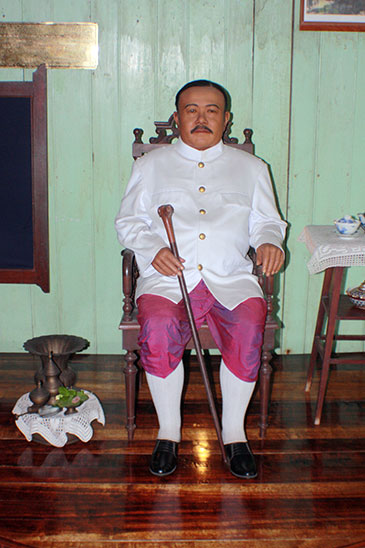 Warning: It takes longer to pronounce the name than it does to view the museum.

It was the home of the Governor, who now sits in the entrance to welcome you.

He’s so scarily lifelike I almost spoke to him. 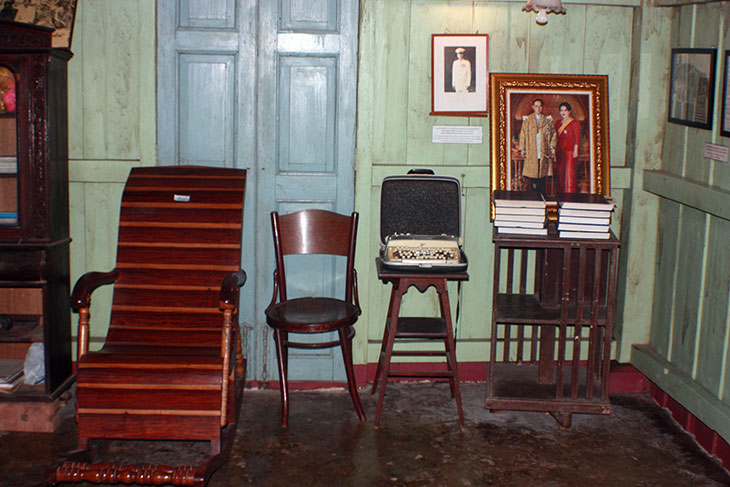 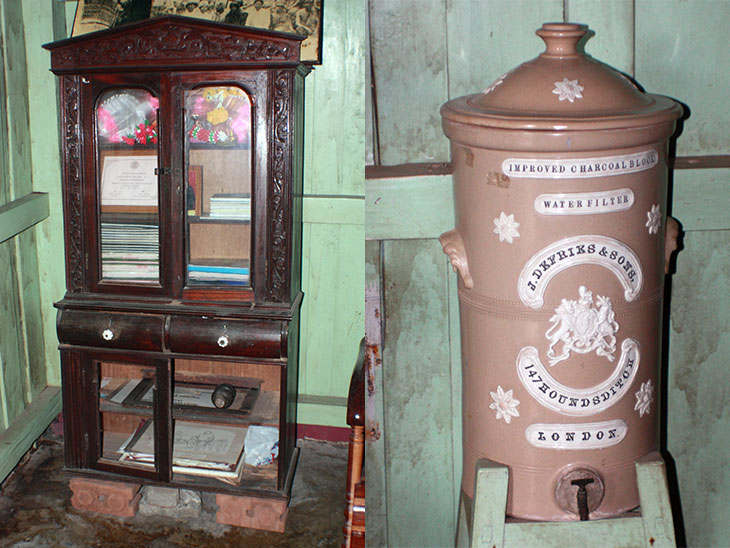 The upper floor is stoutly boarded off so I have no idea what’s there – other than rats no doubt. I’ll spare you my photo of the concrete outhouse.

Okay, the main house is a nice looking building, but the museum seems a bit pointless. 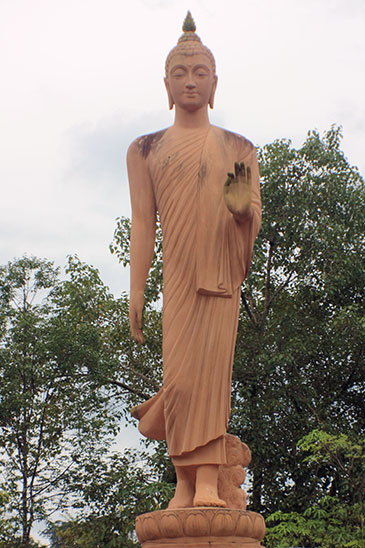 There’s a wat. Well, there would be wouldn’t there. They’re always worth a visit.

But not in Kan Tang.

Even the Buddha statue seems to be saying “Don’t bother. Nothing to see here. Move along please.”

Okay, maybe one day, when they’ve finished painting it… 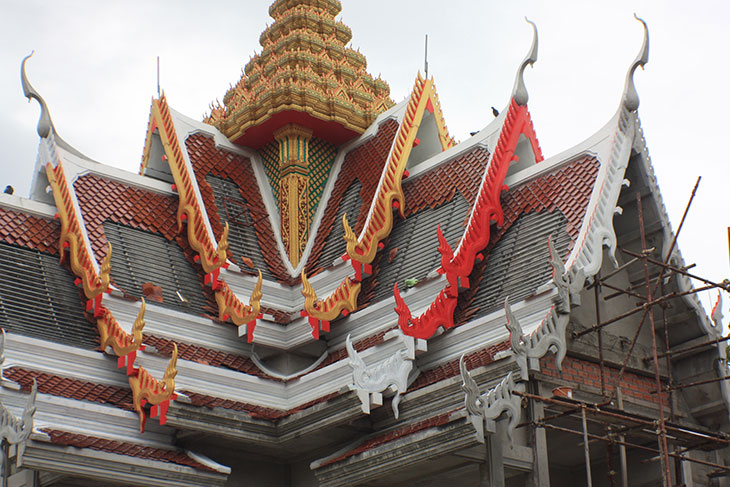 Well then, there’s always the park. It’s on a hill. It has a view of the sea. At least, if you packed your imagination in with your picnic lunch it does… 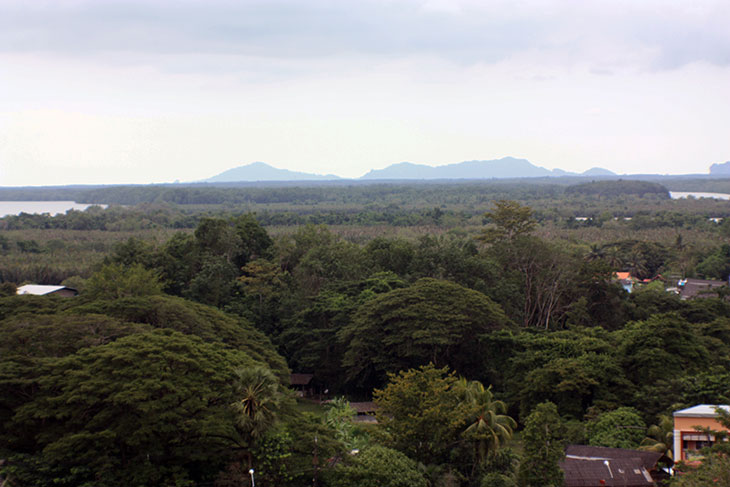 Never mind. I saved the best for last.

Kan Tang has the first rubber tree planted in Thailand – and it’s still alive. Well maybe not the very first, but it’s part of the first group of rubber trees that Phraya Ratsadanupradit planted to pioneer the rubber plantation industry in 1899. He’s the fella sitting in the museum looking pleased with himself. Now you know why.

I confess I drove past the thing four or five times without realizing. It doesn’t look much like a rubber tree. They’re usually tall and spindly. Plus, it seems to be sitting in someone’s front yard. But here, in all it’s 117 year glory (drum roll please) is said rubber tree… 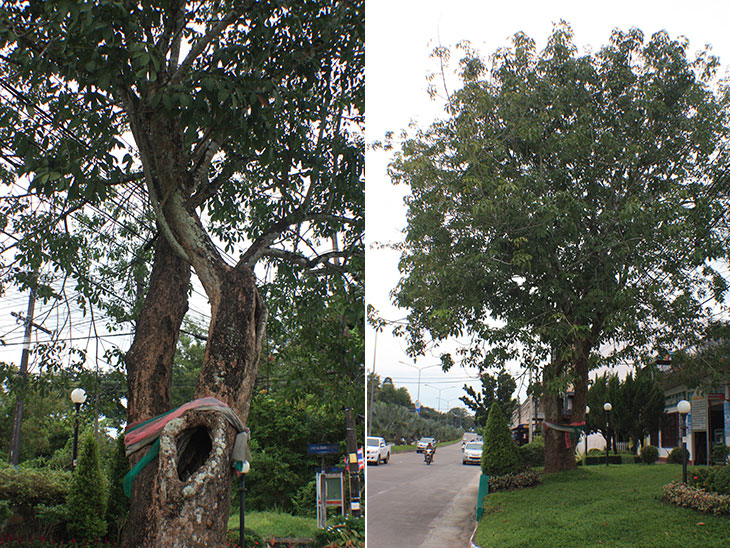 So, feeling – for the very first time – that I hadn’t had a good day out, I headed home.

Thailand has so much to offer, but I’m afraid the Trang area disappoints. Such is life. I don’t just find you the places you should visit, but also the ones you shouldn’t. Except for the cakes. I wonder if I can get them to send by courier?