…In Search Of Silk.

No, I wasn’t planning on becoming a Queen’s Counsel, although, that might have been simpler as it turned out.

You see, I had to go to Surat Thani this morning, and felt I was in need of a little adventure. Although I enjoy shopping trips, it’s nice to add something more interesting to the day.

I checked the forecast at 7am. It said “Cloudy with frequent heavy showers.” I looked at the sky, and it said “That’s Bu!!sh!t.” Given that there wasn’t a cloud in sight, I preferred the latter forecast, and decided on a meander around the roads north of Surat Thani city. If the weather held, I figured I might go as far as Ban Phum Riang. If it didn’t, well, it would be mostly shopping, shopping and perhaps more shopping.

It’s an area I’ve gone through before, but with the purpose of getting from A to B, even though I have to confess I no longer recall where A and B were! On reaching the main crossroads at the start of the city – where one can go straight to reach the main part of the town, or left to the shopping centers – I turned right. This took me out towards the port. You see, I needed to get across the River Tapi, and the main bridge is out that way.

It’s quite some construction. Here’s the bridge, and views from the top… 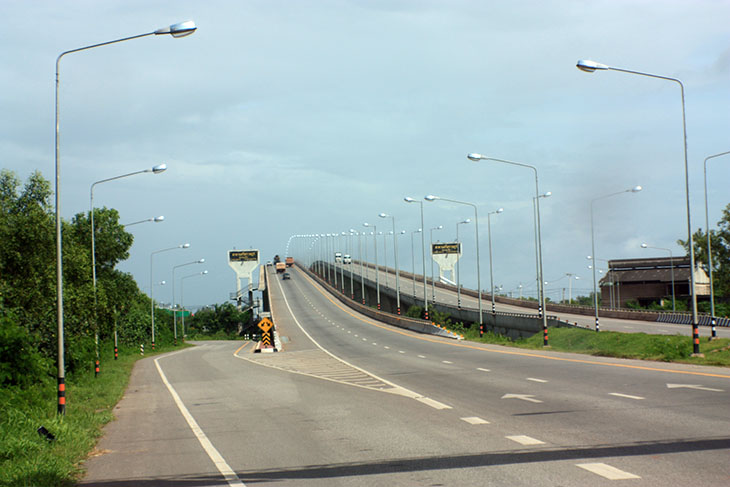 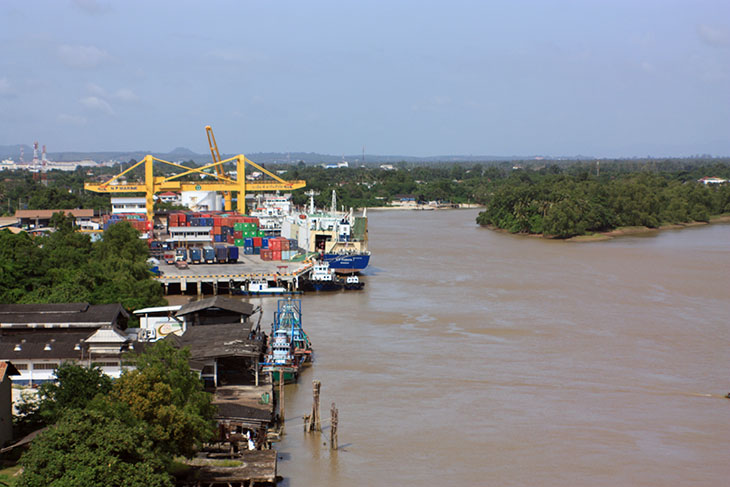 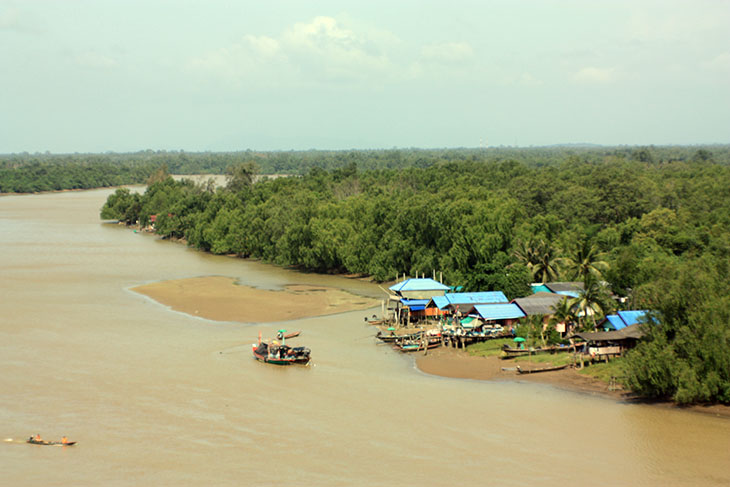 Was I supposed to stop on the bridge? It didn’t say I couldn’t. Anyways, nice views, but not as nice as the ones from the smaller bridges I reached further on in my tootlings… 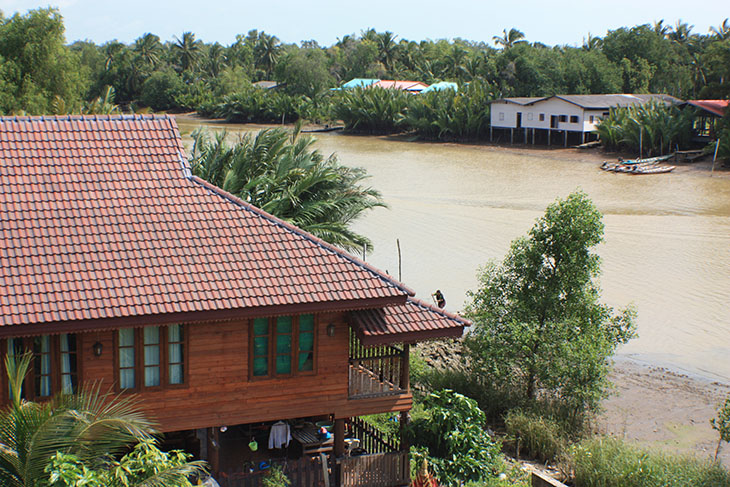 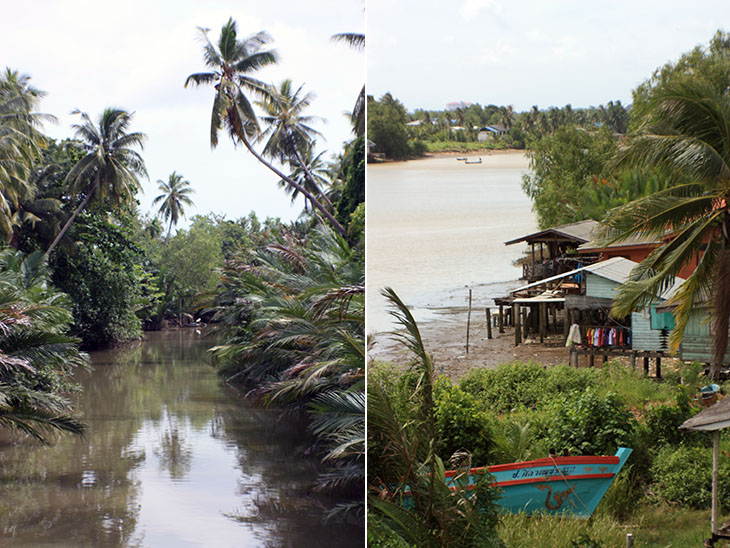 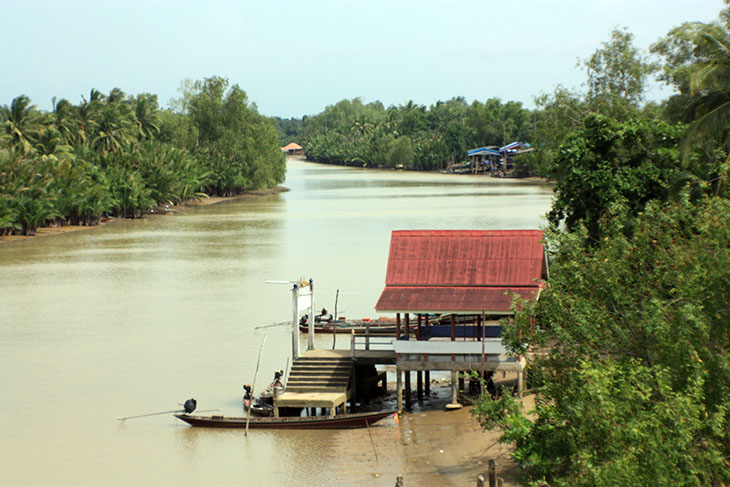 I guess these were some of the small rivers I was on during the Surat Thani River Cruise I took last year.

Of course, there has to be a wat or two. This one was on a fork in the middle of a river. I guess at this point it would be fair if you groaned and said “Not another forkin’ wat.” And then groaned some more. No idea how you get to the place… 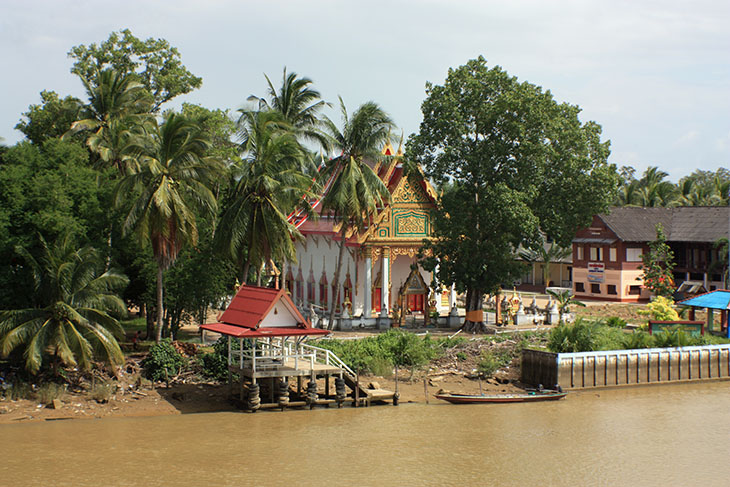 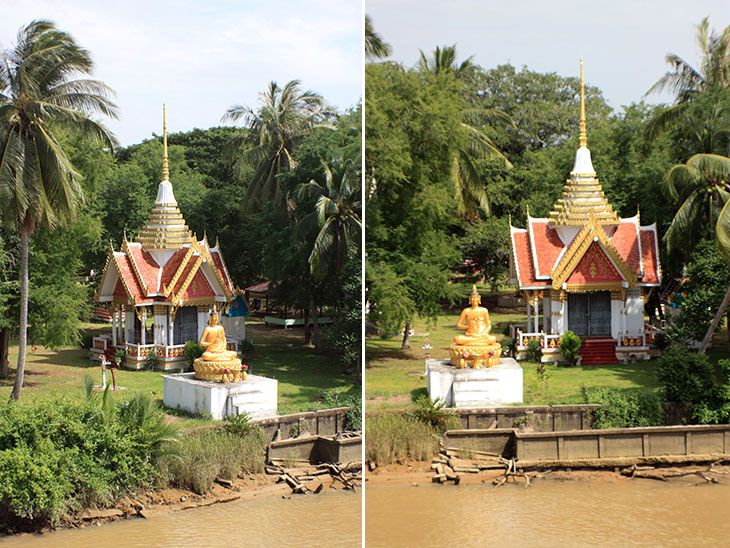 There’s so many rivers I probably could have spent the whole day stopping on bridges and taking photographs. But I didn’t.

Given that the weather still looked okay, I decided to head up to Ban Phum Riang, using only the two-lane windy roads. It’s about an hour north of Surat. And, if you Google the place, you’ll discover it’s famous for silk weaving.

Now, I’ve driven though this place a couple of times before, on my way from C to D, but have never found any silk weaving. So, I decided today was the day. I would park Bert and walk up and down every street in the town until I found people weaving silk. Well, that was the plan.

Luckily it’s an interesting place, and I took lots of photographs while not finding any weaving… 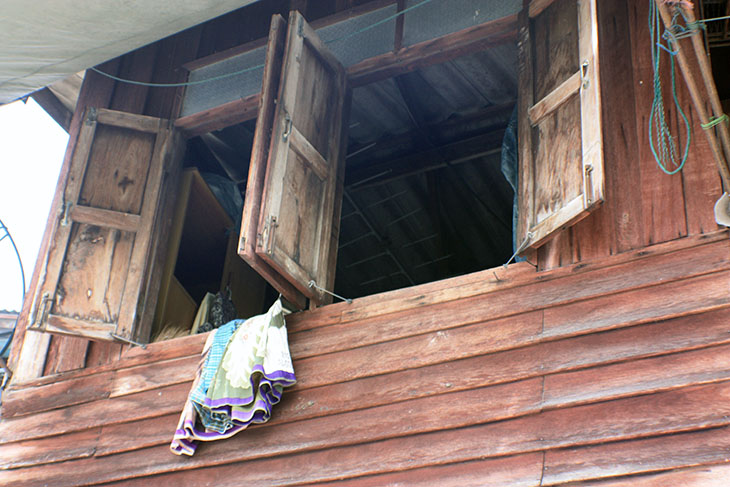 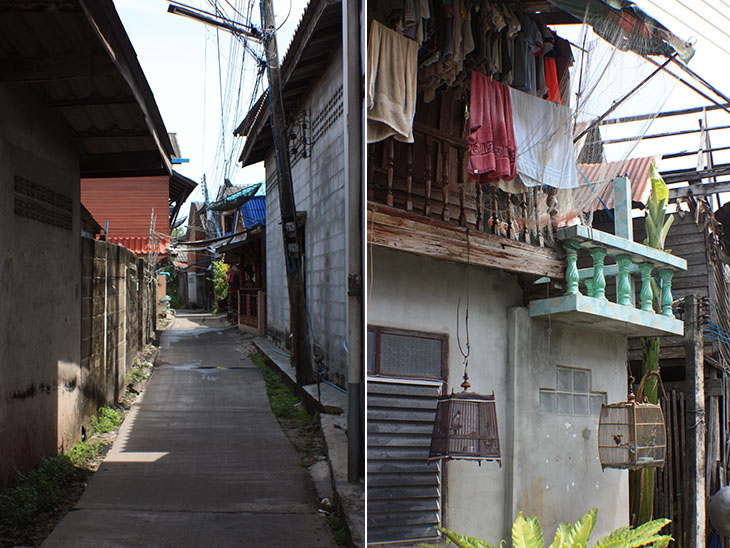 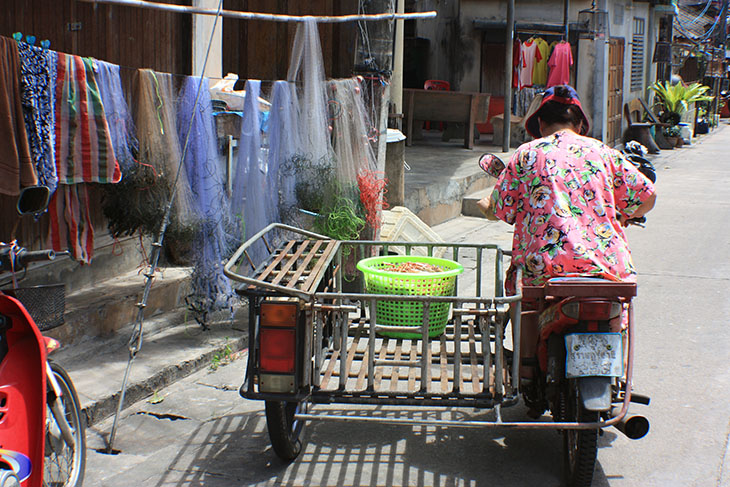 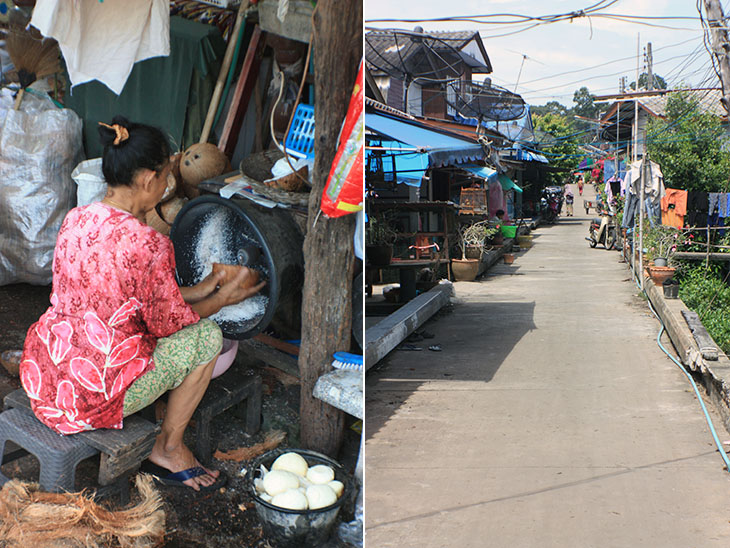 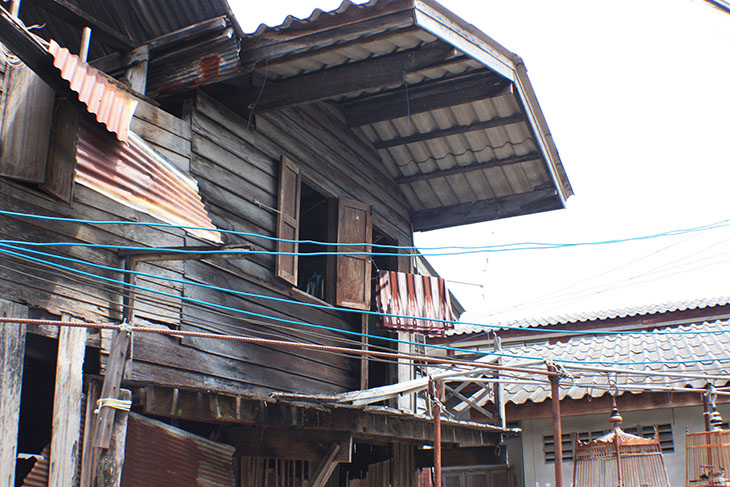 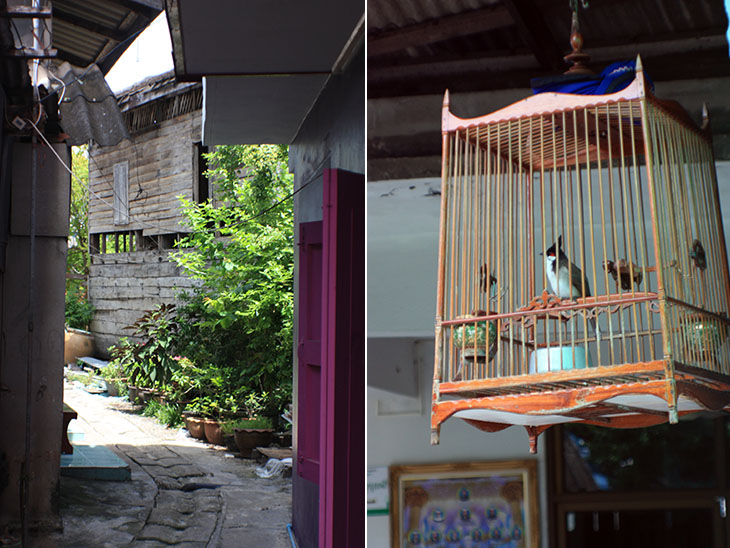 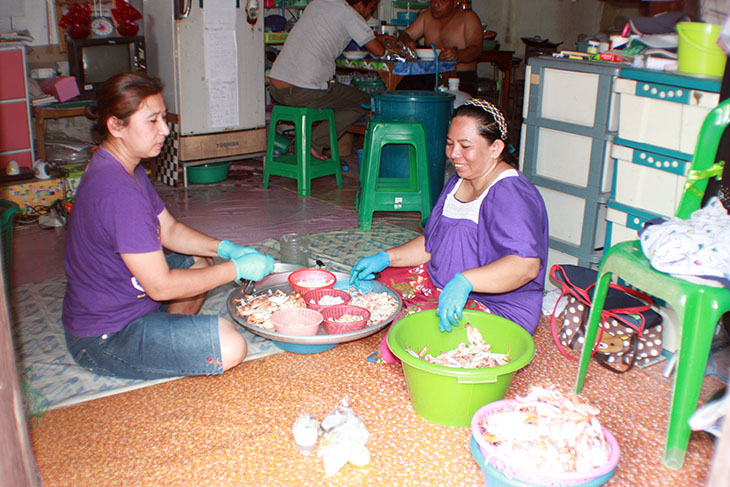 Okay, there were a couple of stores on the edge of town selling all kinds of materials including silk, but no one was actually weaving the stuff. Eventually I decided either there really were no weavers any more (if indeed there ever had been) or there was just one little old lady weaving away in the back room of some darkened building down an almost impenetrable alley.

And then I found another store selling silk. So I went in and made weaving gestures – as one does!

Arms were waved in the direction of a road I’d just been down, which only lead to the river. Either there really was some weaving going on down there and I’d missed it, or the ladies were telling the silly farang he could go jump in the river. Either way, I trudged down to the river, didn’t find anything, and trudged and back again.

As I arrived back at the store, one of the ladies grabbed hold of my arm, and I thought “Great. She didn’t like me coming back and now she’s going to throw me in the river.” But no. She’d taken pity on me and was leading me to the weavers.

No wonder I never found the place. You make a right off the street that is already narrow, and squeeze down an alleyway next to the mosque…

When you reach the T, you make a left…

And this brings you to the weaving “factory”… 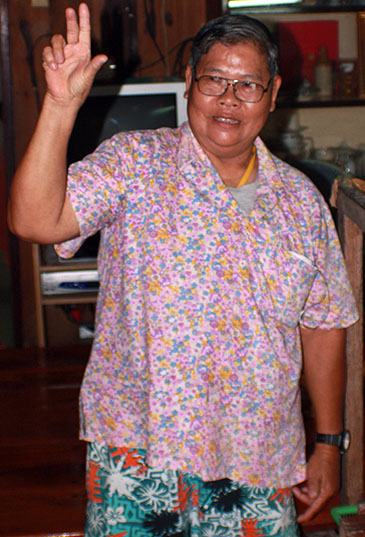 So, I have to confess I was quite wrong. There’s not one little old lady in a back room.

And both of them had to be woken up to give me a weaving demonstration.

This is the lady (on the right) who turned herself in to my tour guide, and as you can probably tell, she can be quite forceful! 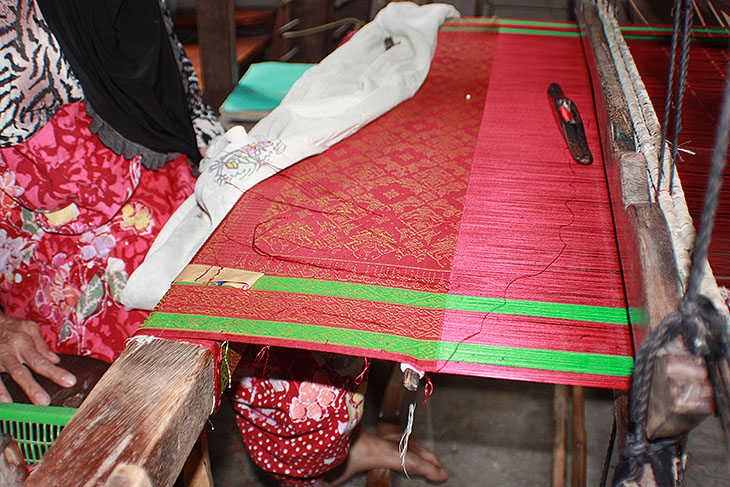 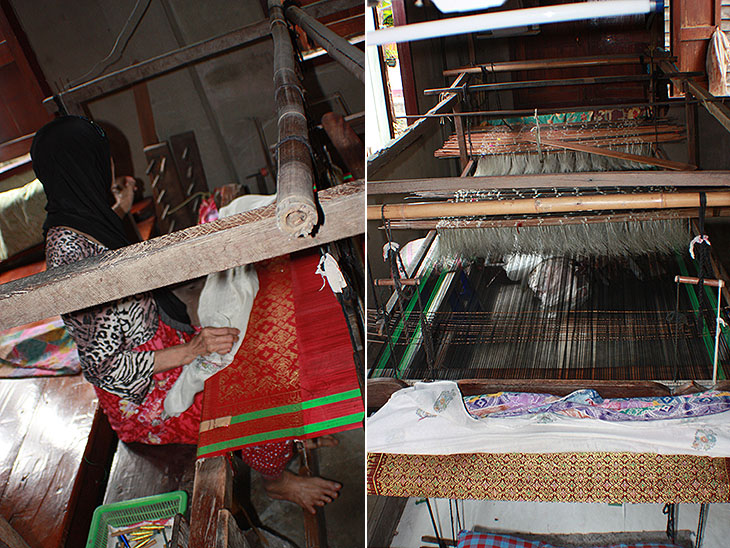 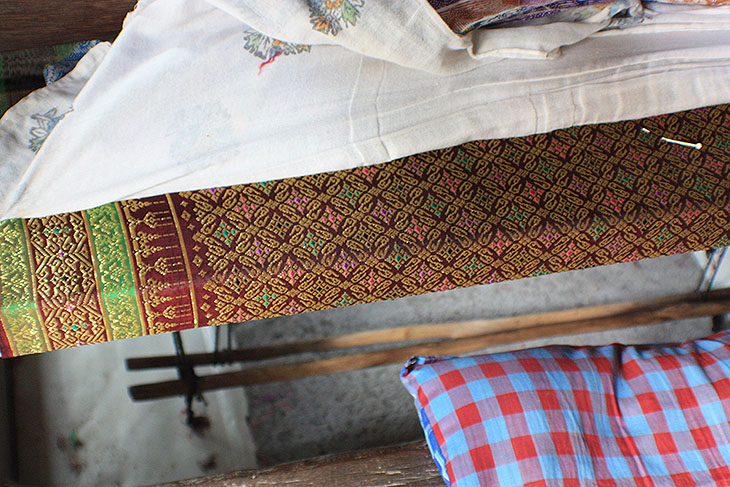 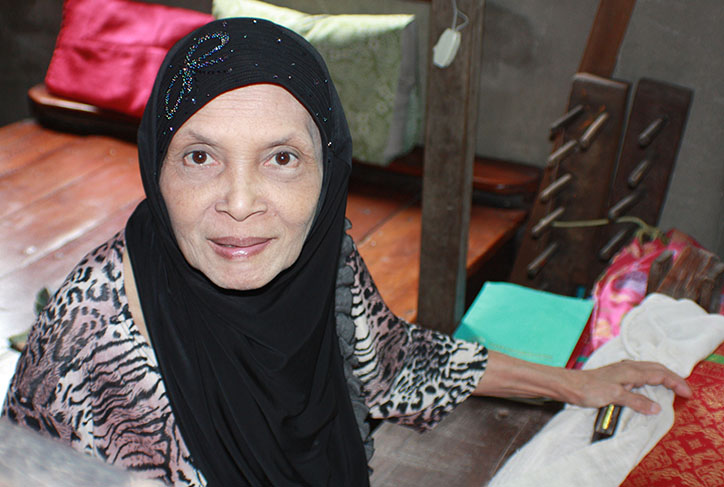 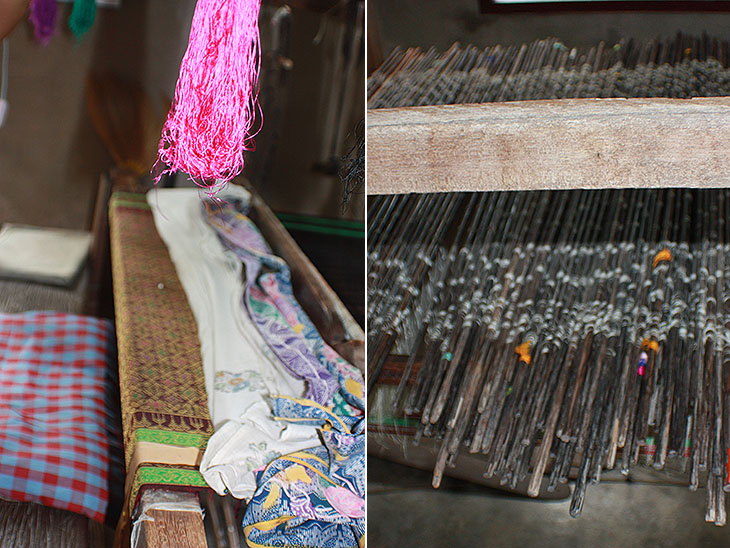 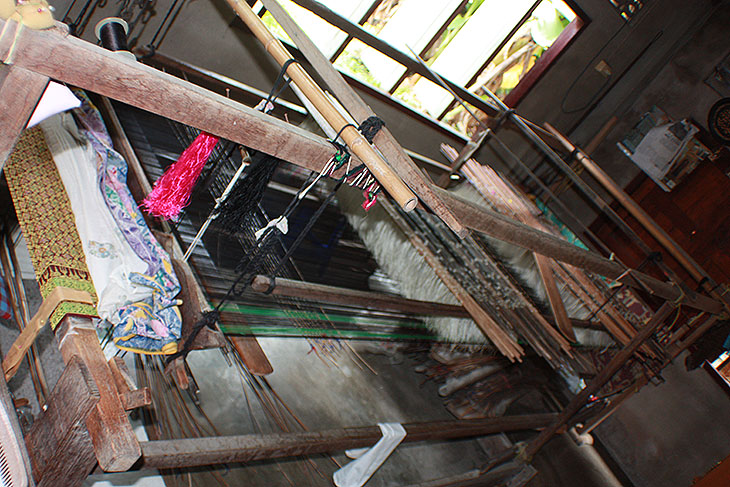 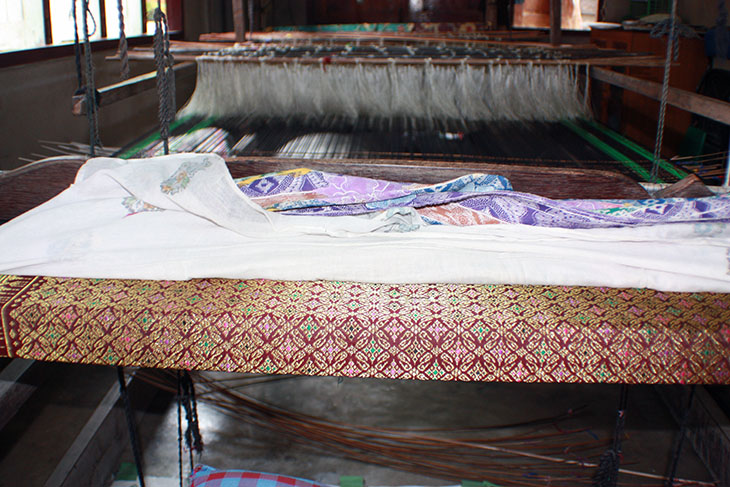 Having found it, I have to say, the stuff is spectacular. The colors of the thin metal threads they interweave with the silk are really bright. Very impressive. Even if it is just two little old ladies, who I suspect won’t be there in ten years time, or even five. And no doubt no one will replace them.

So, if you’re in the area, catch them while you can. If you use the “Where Was I” link below, I think I’ve placed the marker more or less where the “factory” is located. If you find the wat, and then the masjid, you’re close. Or you can go into the corner store and wave your arms around.

After that I became something of a celebrity and everyone wanted to meet the mad farang who’d come to see people weaving.

At least, once back home, Bert and I could agree … “Weave had a really good day.” (Cue more groaning.)