About a week ago I was looking through some photos of the Khanom area that I’d taken some years ago, before I’d moved to Thailand. I noticed this one… 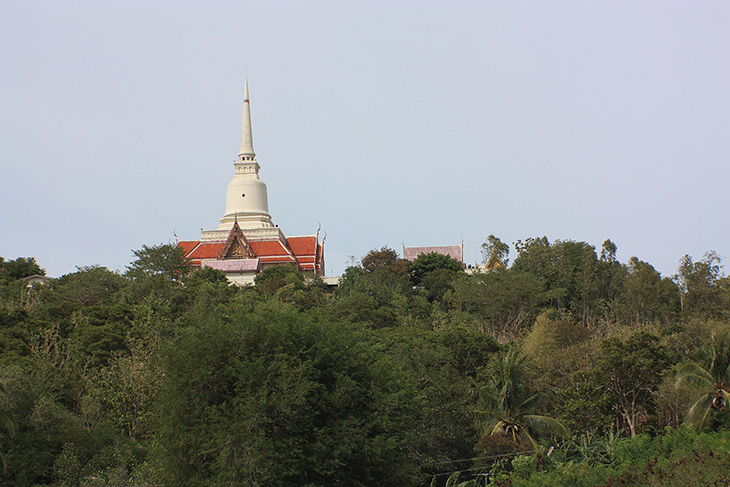 …and I thought “I have no idea where that is.”

You see, when I’m tootling – as I call it – I don’t often bother with a map or a GPS device, I just head down interesting-looking roads, which take me to more and more roads, usually getting narrower and narrower, until I finally decide to find a sign that will direct me back to where I started. My first trip to this area was much like that. So many small roads. So much to explore.

When I saw the above photo I hunted around on Google Maps to try to figure just where I’d been. No luck. And then a few days ago, while looking for images of Wat Suan Mokkh – the place I visited earlier this week – I found this photo on the web… 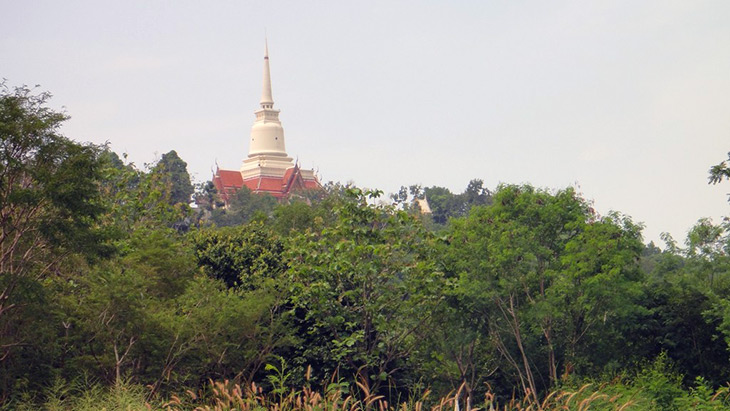 “That’s it” I thought. But it certainly isn’t Wat Suan Mokkh. Yet another misplaced Google Image – but no matter, because that took me to a web page that gave me the real name of the place. Wat Khao Suwan Pradit. And then I discovered it’s just twenty minutes up the road in Don Sak. Naturally, I had to go check it out.

So this morning I was out early, but definitely not bright.

Blame Lord Grantham. Last night I was watching an early episode of Downton Abbey, and when His Lordship poured himself a large scotch, the mirror neurons in my brain signalled – you should do that.

In this weather drinking anything like liquor – that will help dehydrate you even further – is a really bad idea. I must try to remember that.

How hot is it? Well, the thermometer, which is sitting in the shade in my small walled back garden, hit 45°C yesterday, and is about to reach the same today. I think most people would agree that 25° is pleasant, 35° is too hot, and 45° is just plain silly. But it’s been hot and dry since the end of January, and I don’t see any change in the forecast.

On my way back from Wat Suan Mokkh I could see some storm clouds on the horizon, and I was getting excited thinking I might see rain for the first time in three months, but by the time I’d travelled another twenty or so kilometers the clouds had gone. Were they really there? Was I hallucinating? No idea.

So yes, early-ish, I headed up to Don Sak. The wat is on a hill – well, you can see that from the photos above – overlooking Don Sak’s harbor entrance, with views of all kinds of islands, large and small. An attractive location… 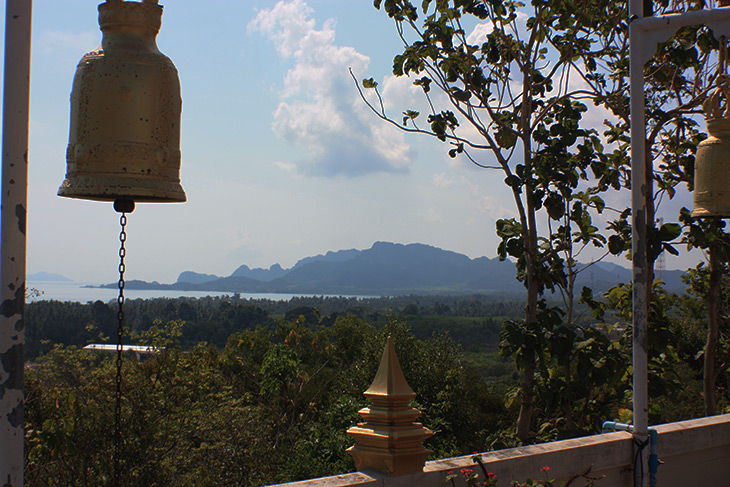 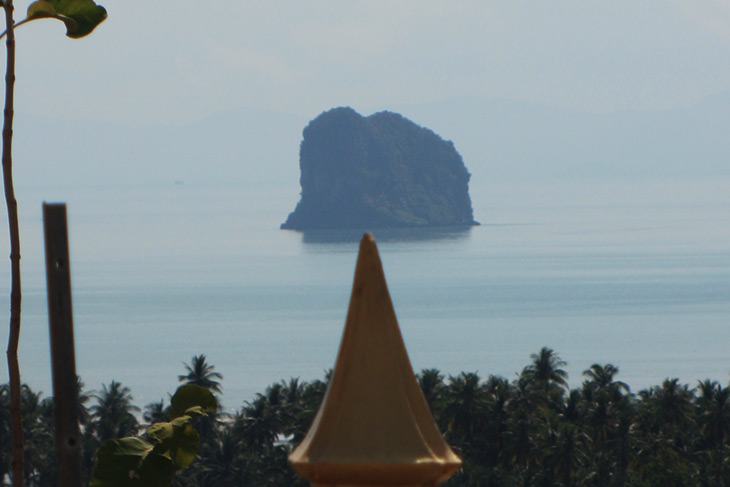 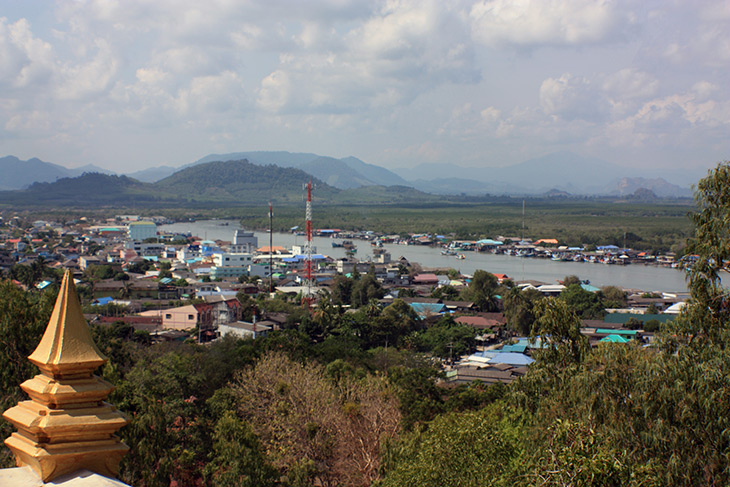 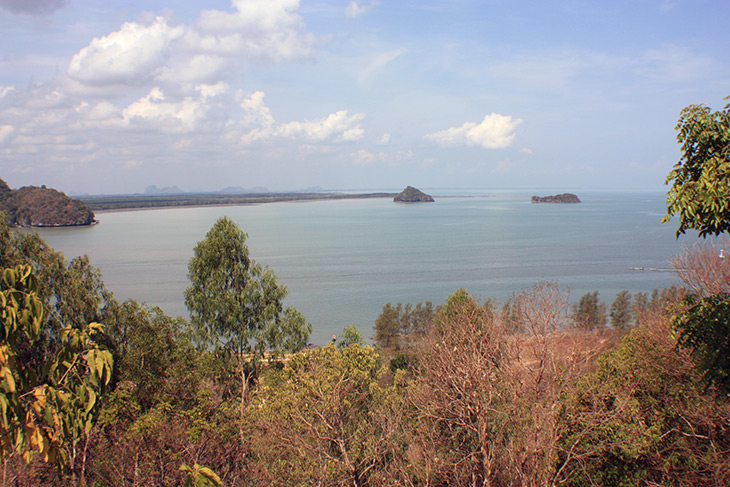 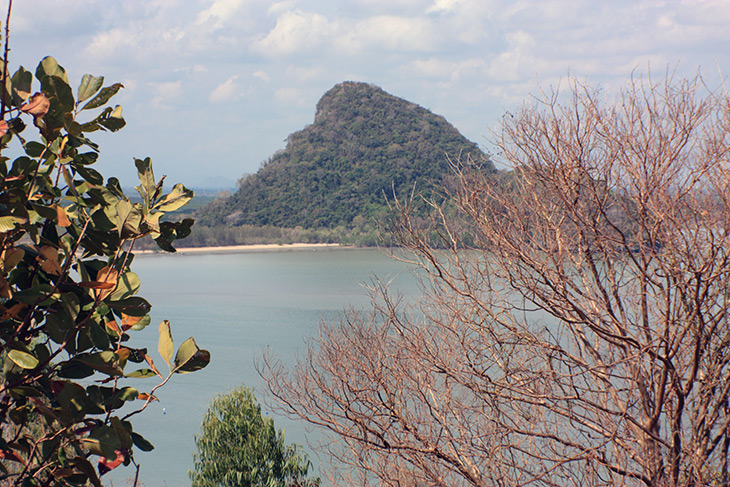 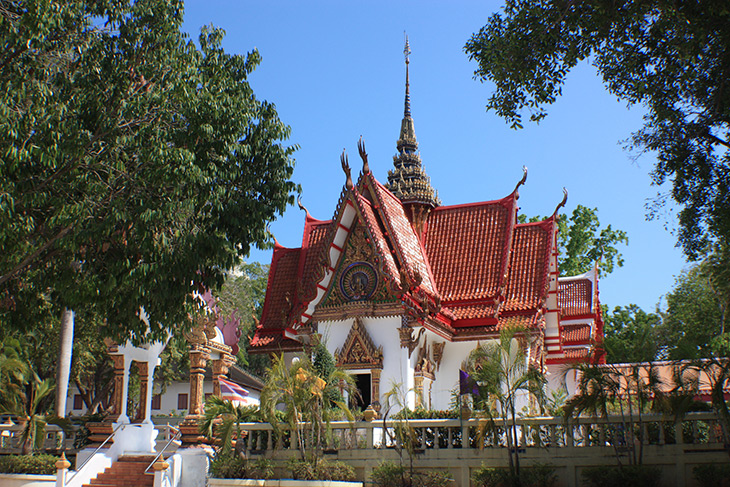 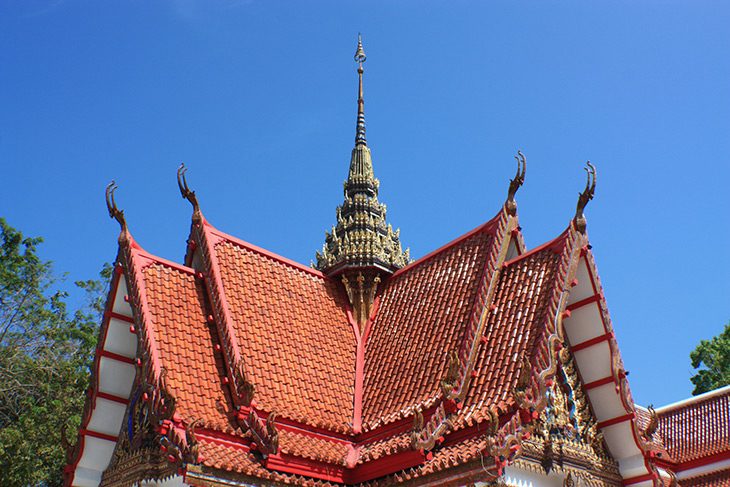 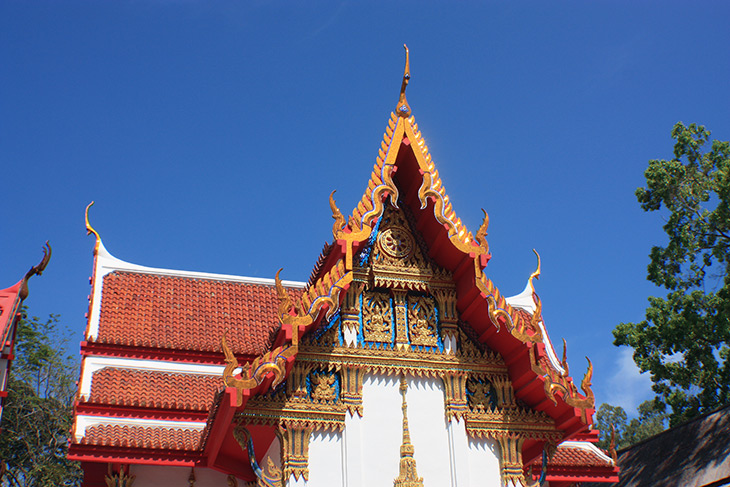 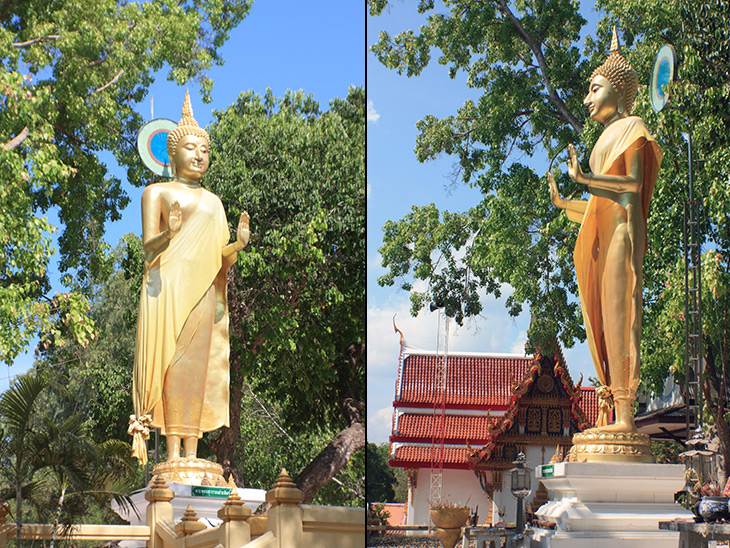 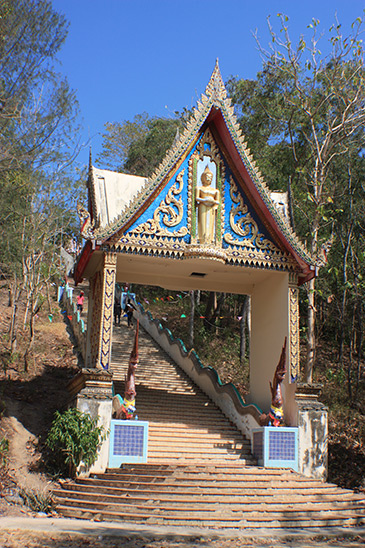 But the chedi/stupa is up a long long flight of steps.

There’s a small road that winds around the hill, and that was much easier to walk up than the steps, and was mostly in the shade.

Actually, I think I could have driven, but that would have been really cheating.

So, here’s what I found at the top… 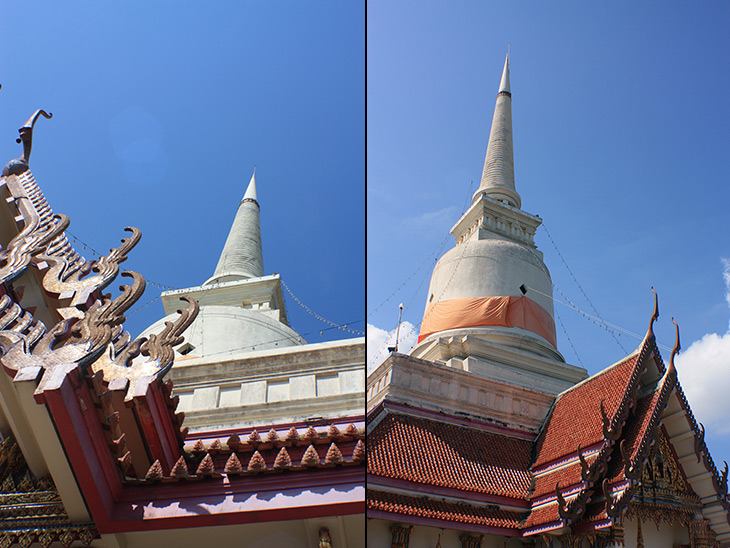 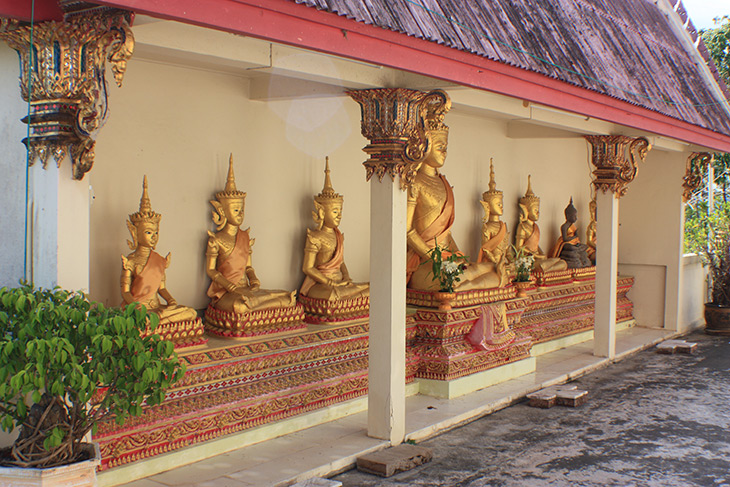 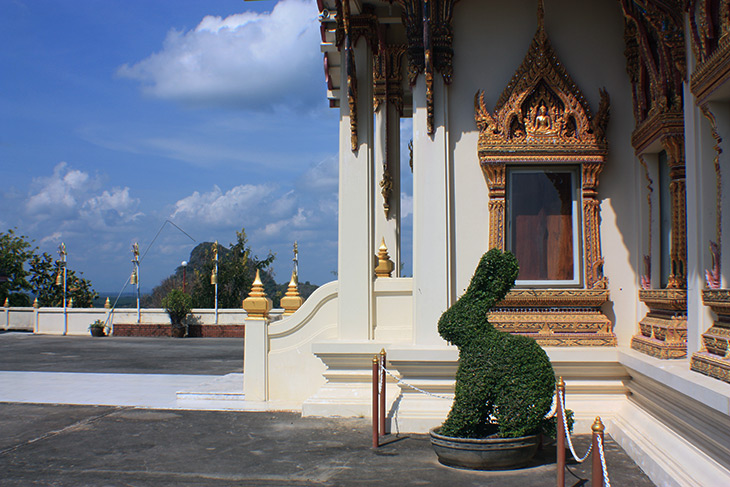 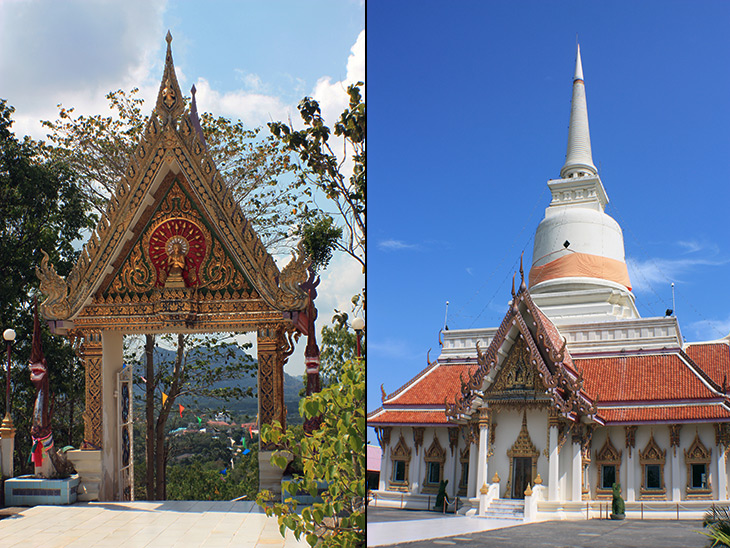 Back at the main wat area, I found more of the small hobbit houses I’d seen at Wat Suan Mokkh which I assume are used by the resident monks. They sure have a nice view… 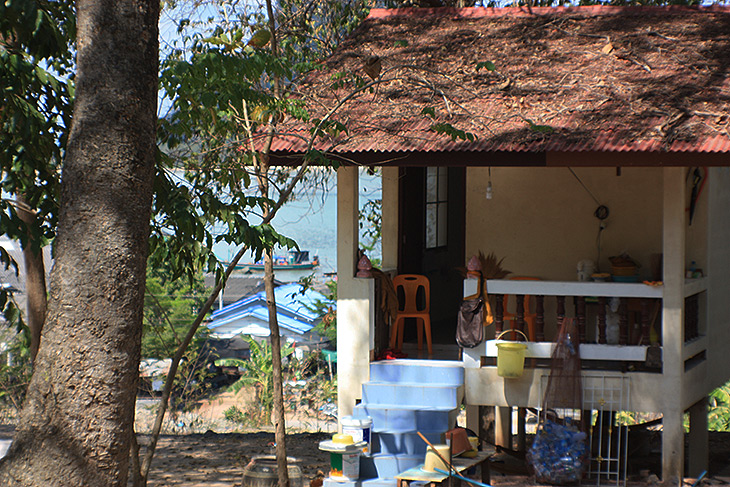 And after that I took a few photos at the bottom of the hill where I found out what it must be like to live in a small fishing village. Not such a pretty sight, but it’s all part of Thai life… 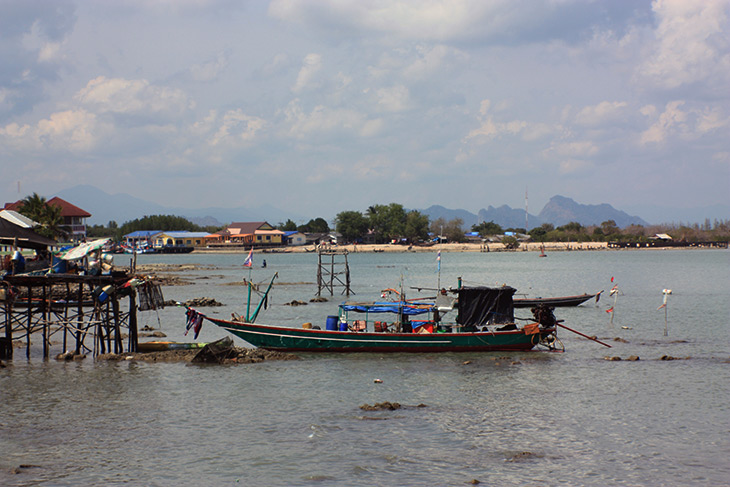 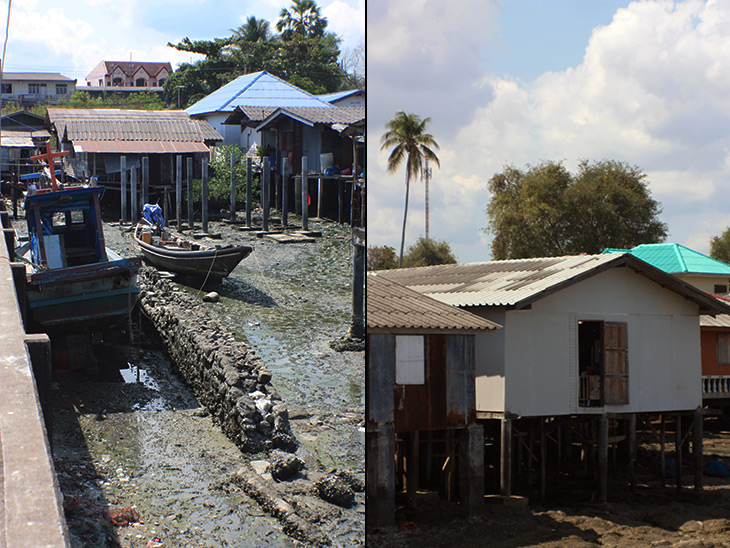 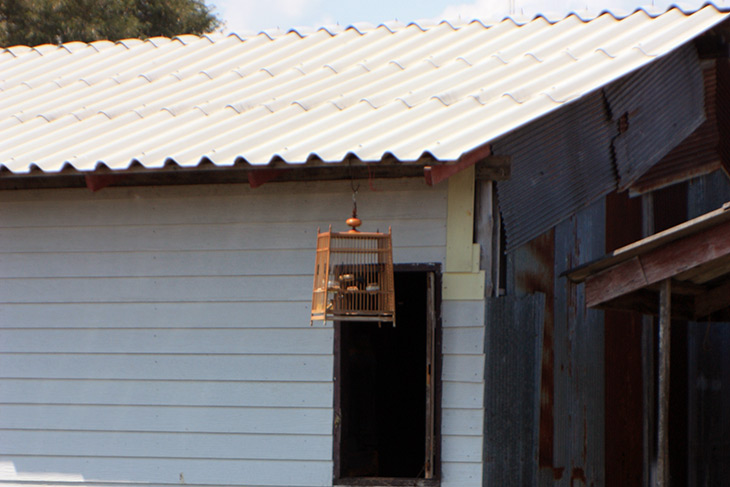