Originally posted Sept. 24th., 2011 in my motorsports blog, which is now closed.

That’s Lotus, as in the green&yellow cars, not the black&gold – the ones which will probably become AirAsia Team Caterham or something. Confused yet?

Not to worry. Team Lotus is the one owned by Tony Fernades and his merry chums. Well, I don’t know them personally, but they seem like a happy bunch. Their website you can find here: http://www.teamlotus.co.uk/ If you scan through the site, you’ll see they produce an online magazine called “Lotus Notes” – one edition per race.

I was amazed to find in the Shanghai edition, both I (being PR) and SR (being SR Motorsport) warranted a mention. Surprised? Me too. We have nothing to do with F1, but of course as fan of anything with an engine and wheels, I do follow F1. 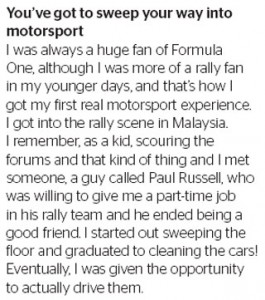 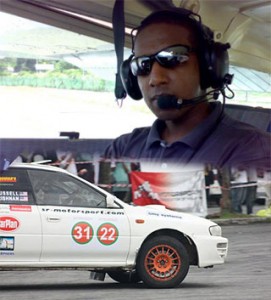 Anand’s comments about sweeping the floor made me realize just how many young people I’ve spoken to over the years. They all want help and they all claim they’ll do anything to get into motorsport. I tell them all the same thing. “You help me and I’ll help you … and you can start by sweeping the floor.” At that point they all come up with the same excuse about having a “family dinner” to attend, and they promise to “start tomorrow.” After that, I never see them again.

Except for Anand. He really did sweep the floor. He really did compete in one of our cars. And he really did end-up in Formula 1. Food for thought. A few people reading this might be feeling rather silly.