Last month, as I drove into Chiang Mai from Lamphun, I found myself on a fairly narrow tree-lined road… 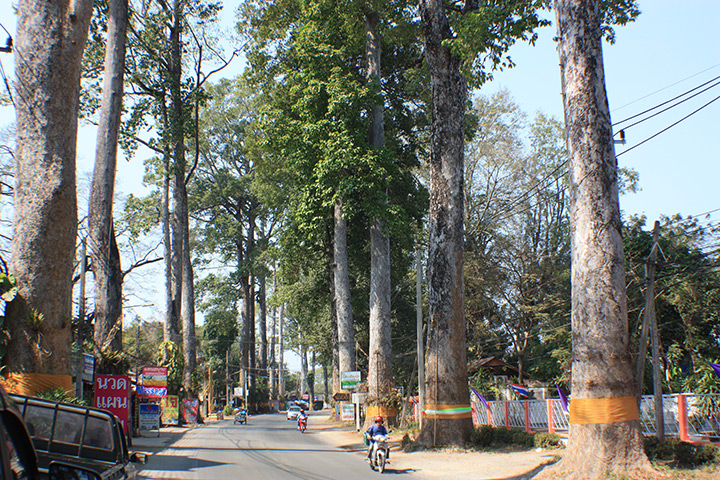 Come to think of it, all the streets in Chiang Mai vary between fairly narrow and better-fold-in-the-door-mirrors narrow. And thanks to the influx of tourists from China, the place has become one huge parking lot. But I digress.

These trees were impressive. And there weren’t just one or two, but several kilometers of them (or several 5/8ths of miles if you’re not of the metric persuasion.) To learn more, some research was needed.

Stories vary, but it seems at one time, the trees lined the whole road between Lamphun and Chiang Mai, and that’s some 25 to 30kms of trees. Today, there’s about a ten kilometer stretch into the city.

The yellow wrapping at the base indicates that the trees are considered by many to be sacred, and not to be interfered with. Whereas families and friends of those killed or injured by falling branches, would like the trees removed! From time to time some trees are deliberately poisoned, which seems a shame. I’m sure if they were properly maintained they wouldn’t be a problem.

But why are they on this road and no other? And what are they? I thought you’d never ask.

Well, it seems that in the days before Thailand was Thailand and Siam was Siam, the area was divided into mini kingdoms. And, wanting to settle a dispute over their boundary, the King of Chiang Mai and the King of Lamphun agreed to ride towards each other, with the line being set at the point where they met.

Except it didn’t turn out to be a fair deal. The King of Chiang Mai rode a horse, with his men planting the trees along the roadside as they went, whereas the King of Lamphun was on an slow elephant – with the result that the trees almost reach Lamphun – or used to.

But in the end, everyone agreed the trees were a good thing, as they provided shade for the Kings’ trains of elephants.

Many of the articles I’ve read claim these are rubber trees. Well, that might be one name, but they certainly are not the spindly things that produce latex. Wikipedia calls them Dipterocarpus Alatus which is a bit of a mouthful, so maybe “rubber trees” is an easier alternative. Although, they do produce a kind of resin which can be used in paints and varnishes, so I guess that’s a bit like latex.

And a little more research uncovers the fact the trees in Chiang Mai are not especially large. Yang Na Yai trees, as they are known in Thailand, can grow to more than fifty meters high with a circumference of more than fourteen meters. That’s a big tree!

Anyways, as I look now at a map of the area, I can’t quite figure why I was on this slow tree-lined road rather than the adjacent expressway, but I’m glad I was. Probably, at the time, Ms. Chuckles would have known, but her memory’s worse than mine. 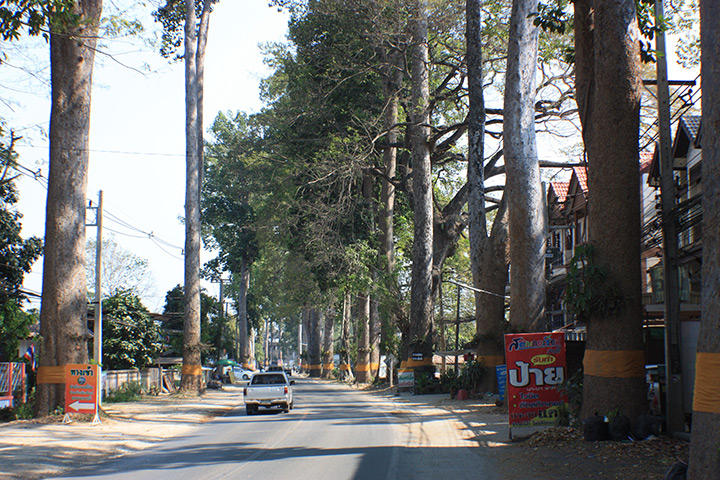