Thank You Google Maps. Often, when I’m looking for places to visit, I’ll select an area, and then hone in on a close-up view of the roads. It’s not until I have selected a really detailed resolution that places suddenly start appearing, like your eyes adjusting to the stars in a night sky.

And that’s how I found Thamma Park. It’s about 1h40 from home and maybe 40mins west of Surat Thani City. But what kind of park is it? 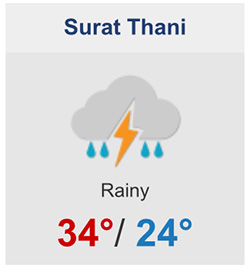 Well, this morning the forecast said “Rainy”. Not “cloudy with some sun and some rain” just “Rainy”. The sky indicated otherwise, so I was on the road soon after 8am hoping to discover what was in this mysterious park.

It was an easy drive. The park is not far north of the main east-west highway 44, which is mostly dead straight and mostly dead boring. Then, a half hour of nice twisty rural roads, past a pleasant lake… 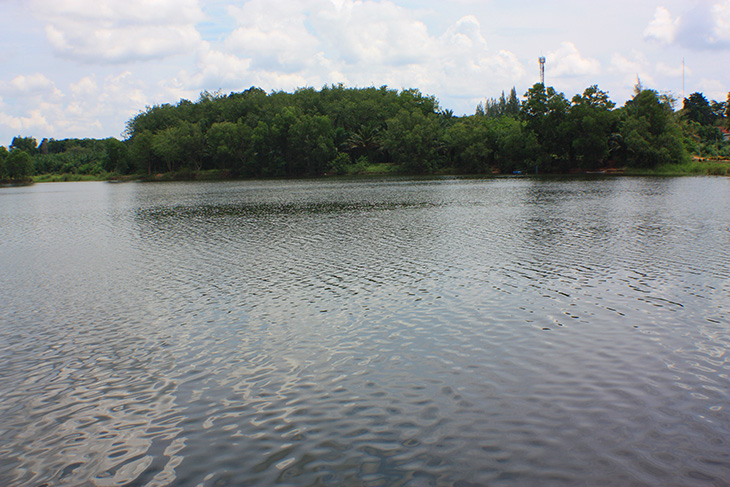 So, you select first gear, ease your way up said road until you find this… 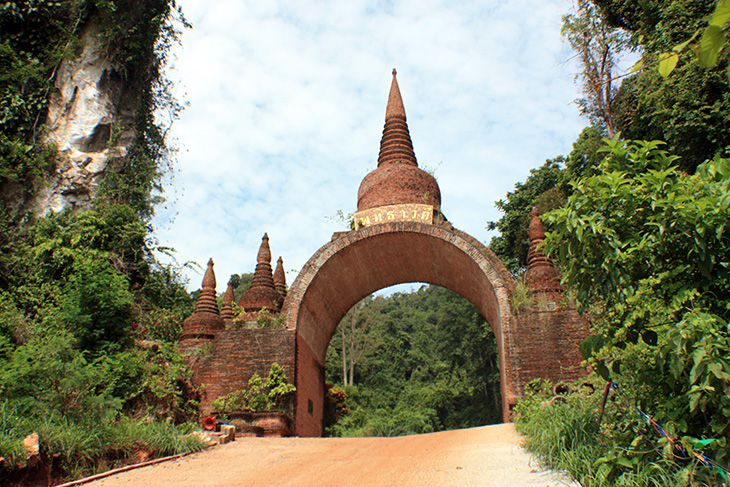 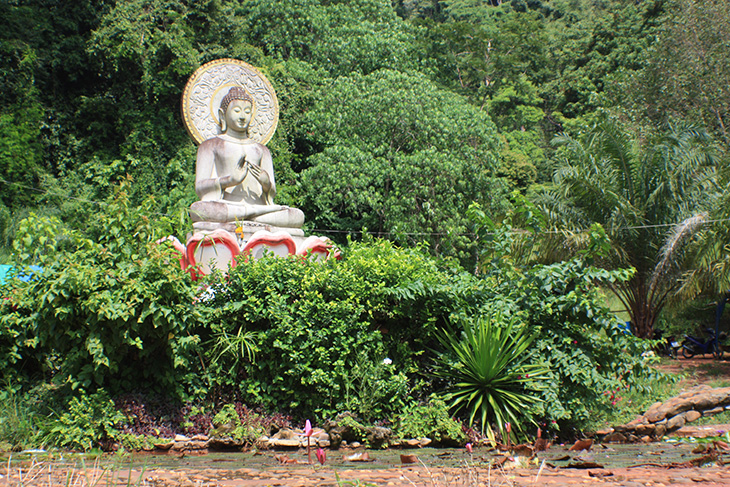 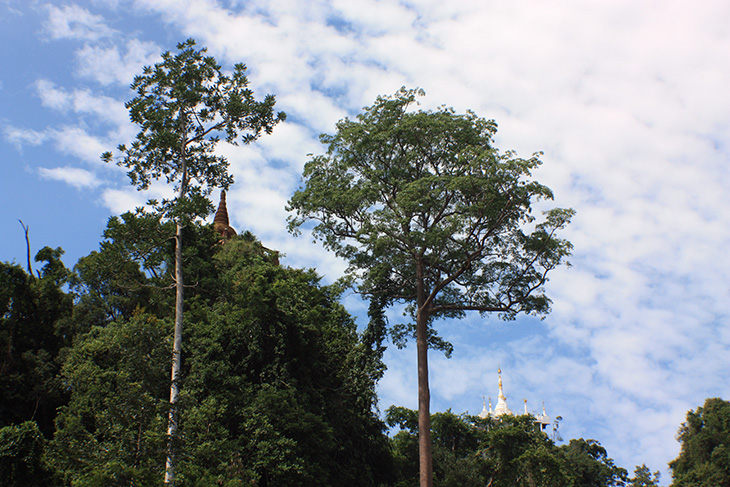 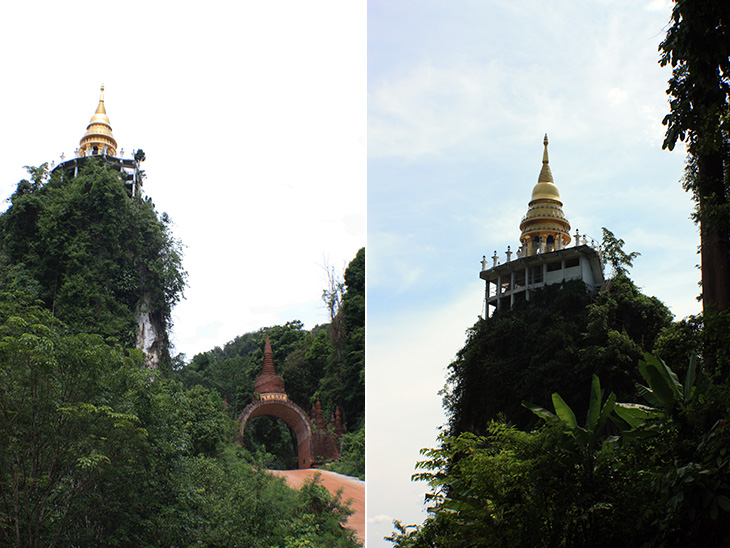 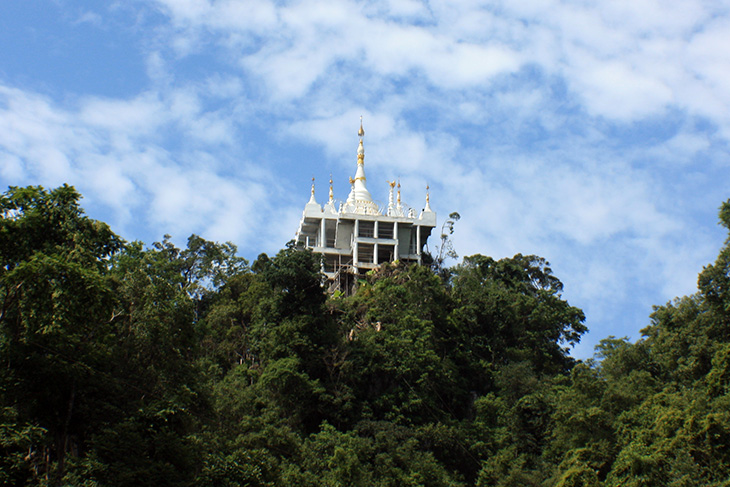 Now, I think the idea is that you spend the day bursting your lungs and getting cramp in your legs, so you can visit each and every hilltop structure. I’m game for a reasonable amount of step climbing, especially if there’s something worth seeing, but I decided – there’s no way I’m visiting this lot. Not that I even knew how many there were, and still don’t, nor how you reach them.

Like so many places I visit it was devoid of signs – and people. No one to follow. The only steps I could find were these… 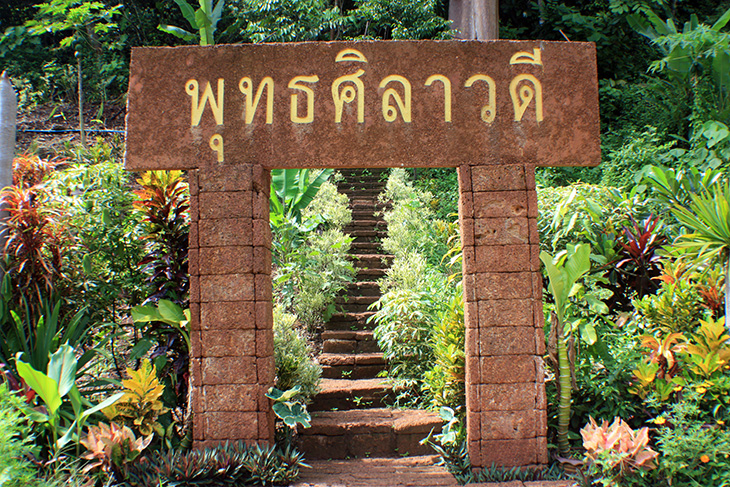 …and they couldn’t lead to all the temples, could they? Well, they could bifurcate, or trifurcate or even eightfurcate, but I figured not. I decided that most likely the brown steps would lead to the brown temple. Smart eh?

But therein lies another mystery. This brown holey rock is normally associated with volcanoes. It’s basically dried compacted ash with the holes being formed by air bubbles trapped in the cooling rock. I only know the Italian name for it – tufo – and it comes mostly from an area south of Rome, called – you guessed it – Tufo. I figured it seriously unlikely a whole temple’s worth had been brought from Italy. But we don’t have volcanoes in Thailand, do we?

Well, Wikipedia says we do. Just two. Up north, and thanfully long extinct. I should have remembered. The ancient Khmer temples I visited a couple of years ago are made of this rock. So, maybe someone figured it worthwhile to transport the stuff 1400kms to the south.

If you haven’t yet gotten the general idea, I’ll admit it. I know pretty-much nothing about this place, and Google and the whole world wide internet thingy are no help either. So all I can say is – please enjoy the photographs – while I ask around to see if anyone has heard of the place.

Anyhoo, I did venture up a couple of hundred or so of the brown stone steps, which became concrete steps. They were a challenge… 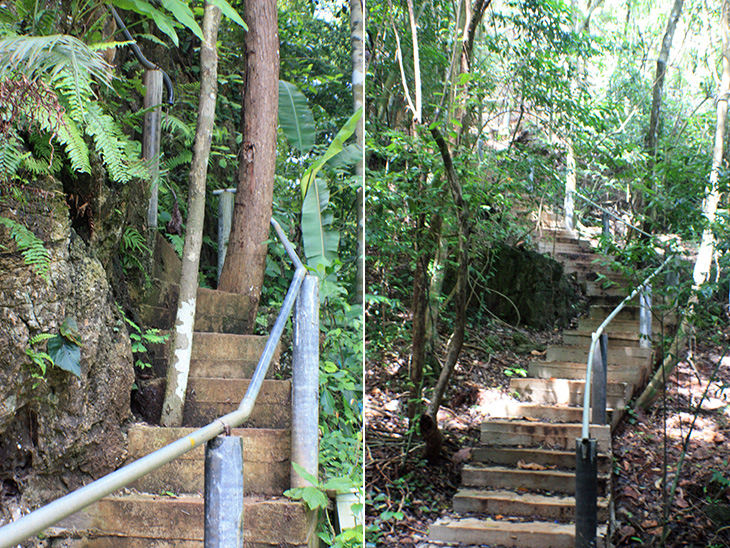 …not so much the steps themselves, but the overhanging trees which meant you had to look up as well as down otherwise something would knock you unconscious. Eventually I decided – this isn’t fun. Climbing deeper and deeper into a dense forest while having no idea where you were really going seemed a bit pointless.

But I didn’t really want to miss out on seeing the temples up close, so I sent Mimi up there to investigate. And that wasn’t quite as easy as it sounds. I noticed a lot of cables running up the hillsides, and I guessed there were probably just as many I couldn’t see against the dark jungle. I decided if I wasn’t prepared to knock myself out, I shouldn’t knock her out either. So, I picked some open areas and sent her straight upwards… 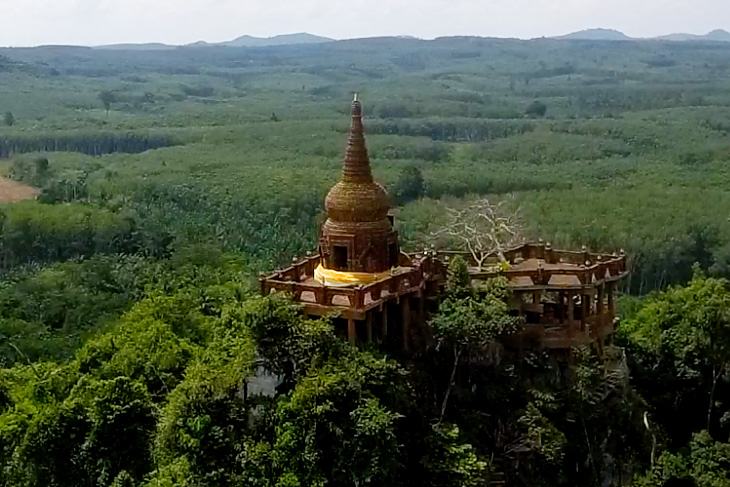 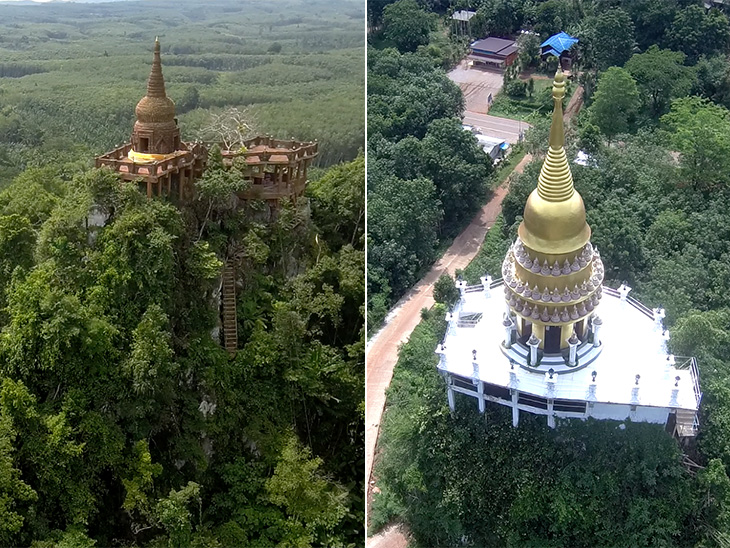 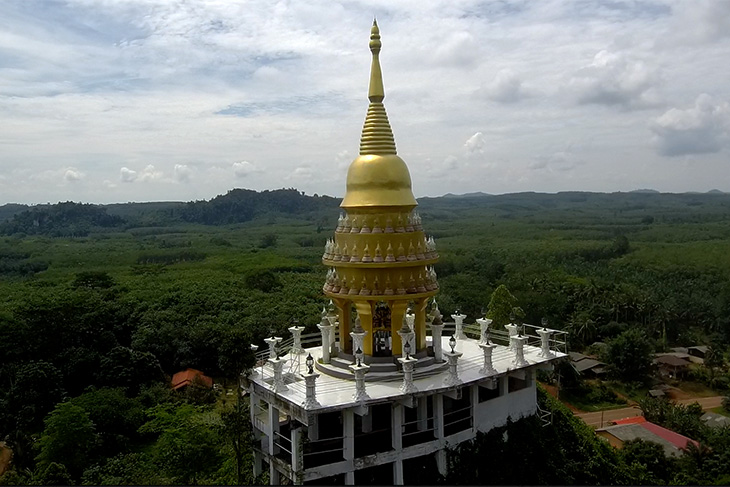 So now you’re as wise as I am. Why is called a park? Why is it even there? When was it built? And a hundred more questions will have to stay unanswered for now.

One question did get answered, sort of. From high up, Mimi spotted another temple even higher, that as far as I could tell, isn’t visible from ground level. You can see it top right… 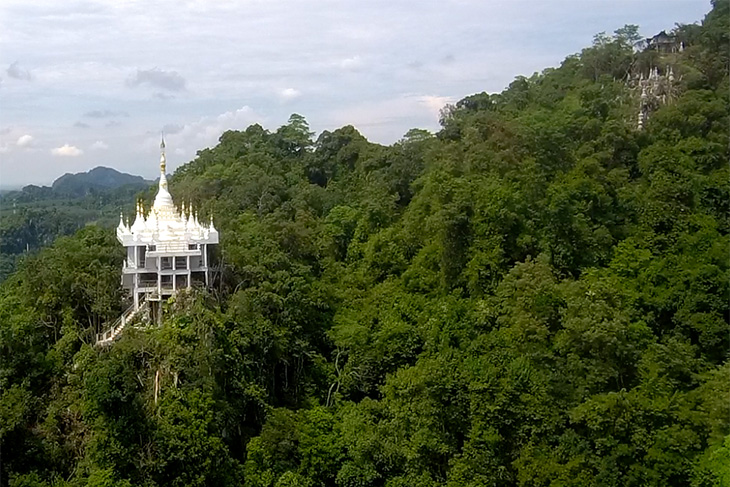 …so I think that makes four, but of course there could be more.

Oh, and if you’re wondering, it didn’t rain, at all, all day. Although, as I mentioned, it’s not too far from home, and I was back by lunchtime. Not a bad morning’s work.