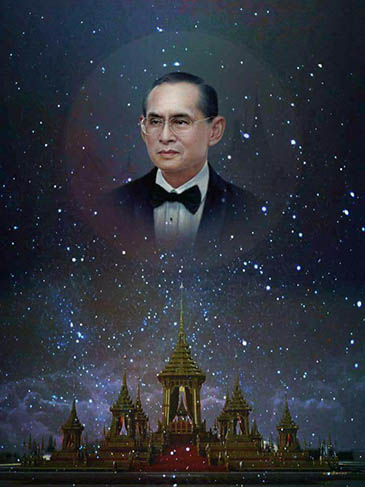 Today in Thailand is the cremation of the late King Bhumibol Adulyadej, who passed away just over twelve months ago. Given the extensive international media coverage, I suspect you must have recently returned from Mars if you didn’t know that.

I confess, I expected to have no involvement in the nationwide ceremonies, other than being aware that it’s a special day, and noticing that the country has effectively come to a standstill. It never occurred to me that in a small place like Khanom, the day would be marked in any other way than by businesses closing early and people making sure they watched part of the ceremonies on television. I was wrong.

Friends mentioned they would be going into the town to pay their respects and asked if I’d join them. As with all things regal, it didn’t sound like a request. So, of course, I agreed – without having the slightest idea what this would entail. Then there was the “suggestion” that I should wear smart black clothes.

Well, my small supply of black shirts has been given a good wearing over the past year, so the top half presented no problem, but black pants! Do I even have black pants? Panic set in.

For the past five to ten years, the word “smart” when applied to clothing, has meant clean jeans and a polo shirt rather than shorts and a tee shirt. I really wasn’t sure what I’d find in the pile of clothes reserved for meetings, weddings and funerals. Ah ha. I was in luck. Black pants. Neatly pressed. Not eaten by moths or worse. Not stained by humidity. But what about shoes?

This morning, leaving everything until the last moment as usual, I dug out a couple of pairs of smart black leather ones. The first pair fell apart as I tried to clean them. They’re in the trash. The second pair must be made of sturdier stuff as they cleaned-up quite nicely. And as I had a final check in a full-length mirror, I must say, I cleaned-up quite nicely too.

So, somewhere just before 11am a small group of us Thais and farangs trooped off into the town. Along with every other resident of Khanom. This was clearly not going to be a minor affair. Key roads were closed. Mini buses were ferrying around dignitaries and organizers. The police and armed forces were out in – well, force.

And where are the photos, you’re wondering?

Early on I decided this was not the day to lug around my trusty Canon DSLR and associated equipment. I could have used a phone camera, but somehow the mood seemed wrong. A few people took the occasional overview of the whole scene, and one or two found themselves unable to resist sneaking a selfie, but by and large this was a camera-free day.

Now, given that any meal in Thailand cannot be eaten until every diner has taken at least ten photos of the food, twenty of each other and five of the restaurant, this was indeed a unique day. So, I’m afraid you’ll have to try to conjur-up your own images from my narrative. I’ll do my best…

In the center of Khanom there’s a giant oblong of grass, and around the perimiter lie the Hospital, the Police Station, the Post Office and various other government buildings. It’s conveniently designed should you ever need to make a police report, get a blood test, and mail off the results all without moving your car. This morning, the grass was covered in vehicles of all shapes and sizes. Hundreds of them. So I joined them. But I did this without noticing the dozens of baton-waving whistle-blowing official-looking policemen posing as parking attendants. Or were they parking attendants posing as … never mind.

After further considerable baton waving and whistle blowing, all done with a smile and a bow of course, Bert was re-parked, all of … five meters away. Everyone was happy.

From there we were ferried by mini-bus from the main government office area, along the main road, to the main junction where further main roads lead out of Khanom to the main beaches and the main port area – the latter of which was closed as it also leads to the main wat. So we were dumped out of said mini-bus to walk the few hundred meters to the wat. We looked like two giant black snakes. One slithering its way to the wat, and the other – having paid its respects – slithering its way back.

Still having no idea what to expect, we slithered into the grounds of the wat, but not before showing identification and signing a guest book.

It’s a big place. I’m not very good at estimating numbers of people, but for sure the attendance was in the thousands, probably tens of thousands. We were all ushered from one under-canopy seating place to another, as we tried to get nearer to the paying of respect place.

Even allowing for the fact they’ve had more than twelve months to plan this, it was all incredibly well organized. I guess with a military government, you could expect it to handled with military precision. No complaints. It worked well.

I think we started in some overflow area with plain plastic seating before being marched to the main seating area with plush seats and white cotton covers. Everything was immaculate. From here we had our first glimpse of what paying of respects actually involved. Sit, watch, learn, jump up on command.

Adjacent to this area there were roughly ten columns of people, about twenty people deep. Rows from our seating area were periodically moved to join the ends of these columns. Eventually I became one of those column joiners.

Each column was separated by long black and white ribbons supported by gold-colored poles. The poles were maybe a meter and half apart, and it quickly became clear we were expected to stand exactly between two poles, and not move until the whole line moved forward, at which point we lined ourselves up with the next poles.

But before entering the columns, we selected, from a tray, a small white flower tied to an equally small sandalwood stem – this being the late King’s favorite wood. Observing carefully it seemed the correct posture was to hold the stem with your right hand while placing the flower close to your heart. Until … there were no more gold poles and ribbons and you found yourself at the head of the line. A large portrait of the late King was the dominant feature.

Upon command, the whole front row bowed respectfully. At the second command we placed our sandalwood flower and stem on another tray. (Shame, it would have made a nice momento – but obviously they were being recycled.) At the third command we bowed again, and on the fourth and fifth turned ninety degrees right and marched away, to be replaced by the next row in the column. Despite the military precision it was a moving experience.

That was it. We became part of the returning black snake, and the morning was over. But it was something I won’t forget. A very special morning.

Given that I don’t expect to outlive the new King, it was a once-in-a-lifetime experience. But perhaps there will be a happier celebration to accompany his coronation. Perhaps I’ll be invited. We’ll see.