Why Kanchanaburi? I think the simple answer is weather. Despite the fact it’s a place I really like, having been twice before – or maybe it’s three times – it wasn’t really on my “Visit Soon” list.

In the south, the second half of 2021 produced some really foul weather, with almost no sun, but heavy cloud and frequent rain – torrential at times. After being locked down for much of the first half of the year due to Covid, and then the second half due to the weather, I was getting cabin fever. Kanchanaburi in central Thailand was really the first place I could go in a northerly direction to reach the sun.

So, I decided to get the hell out of here.

Ha! Easier said than done. I really only need a couple of days notice to finalize a trip, so, keeping a careful watch on the weather forecast, somewhere around late October, I thought – that’s it – I’m going. But the weather here took a turn for the worse, and the only north-south road through Chumphon province was flooded, and impassible to even heavy trucks. Once that had cleared, the cloud seemed to move north to – you guessed it – Kanchanaburi province! We went around this cycle twice!

But, eventually, I did get the hell out of here.

I didn’t really fancy a ten-plus hour drive all the way to Kanchanaburi, with the possibility of feeling fairly dead for a day or two afterwards, so I settled on a seven and a half hour trip to Ratchaburi. (Ignore what it says on the Google map!) It seemed about right, and would maybe leave a little free time for sightseeing. And that’s exactly how it went.

About thirty minutes short of Ratchaburi town – or is it a city – I’m never sure, I made a detour off the main highway. I was looking for statues on hills near something called the Center for Buddhist Studies and Wat Khao Than Talu. It took a while to find them. There’s a number of pointy hilltops and the ones with statues tend to be a bit hidden. In fact, I’m not sure how many statues there are. I found three, but not close together. One was off in the distance somewhere, so I ignored that one. Two’s enough… 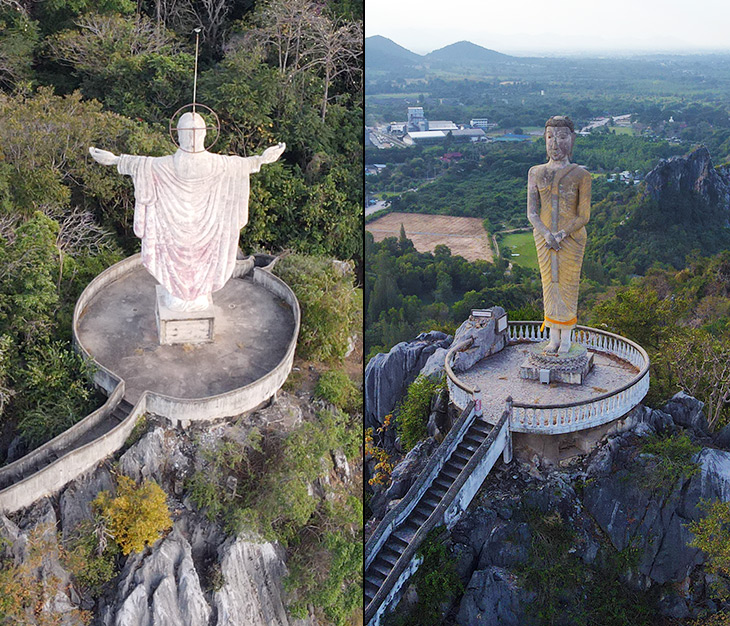 Yes, you can walk to them. In fact you could probably spend a whole day walking to them – fighting off snakes and monkeys along the way. Or you can send up a drone for a quick look, which seems infinitely more sensible.

Just why the statues are there is a bit of a mystery. There’s nothing of help on the intergooglethingy, but many local stories seem to have a common theme. Some virtually unknown religious sect moved into the area somewhere around 1980, and since they kind-of minded their own business, plus they were busy building religious statues on hilltops, they were left to their own devices.

Until more local stories started circulating, which featured drug dealing, money laundering and other unsavory activities, so the sect disappeared. Jailed? Deported? No one seems to know, or won’t say. So it’s become the sort-of tourist attraction everyone knows about but won’t mention. A giant local embarrassment. “Oh, the statues? Well, instead you should go to this place or that, or…”

So, the drone photos were taken. A few heart-stopping moments ensued when Maxie disappeared behind the hills and I lost radio contact. Raising the remote controller above my head and pointing it in different directions did the trick. Looking like I was doing some exotic dance, I could almost hear some local Auntie saying to her friends “See, I told you these farangs are all stark raving mad.” You can see her point.

Anyways, next up was the hotel, beer and supper… and beer.