Why not all the bits? Well, that’s what I was writing, as I usually do after a trip. A chronological record of every place I’d been. But my writing got slower and slower until I realized – I’m bored. And if I was bored, you’d be bored. 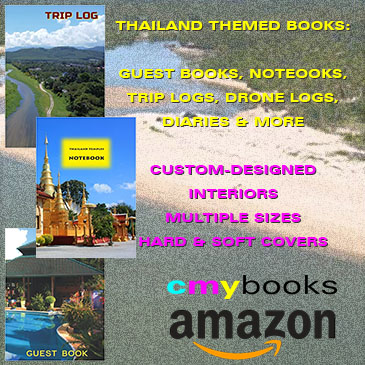 I visited a lot of wats, and whereas they were almost all nice, very few were spectacular or out of the ordinary. So I deleted a few articles, and now I’m back – to write only about the best bits. There were still plenty.

But before I get started on that, I have to praise whoever it is in Ratchaburi’s Highway Dept. who decides what signs to erect and where. Most tourist places in Thailand I’d never find if it wasn’t for Google Maps and GPS software. I curse Ms. Chuckles, but I couldn’t live without her. Except in Ratchaburi province. Every important tourist attraction has direction signs at every junction. Very impressive. Why not the rest of Thailand?

So, first up, actually in Ratchaburi town – probably walking distance from my hotel, although I didn’t – was Wat Mahathat Worawihan.

This place is old, older and oldest. The old parts – the pagodas, or prangs – date back to the 15th century CE. The main Prasart, the building at the bottom of the picture below, is believed to have been constructed in the 13th century. And the Vihara, the small building at the top of the steps was started in the 11th century. 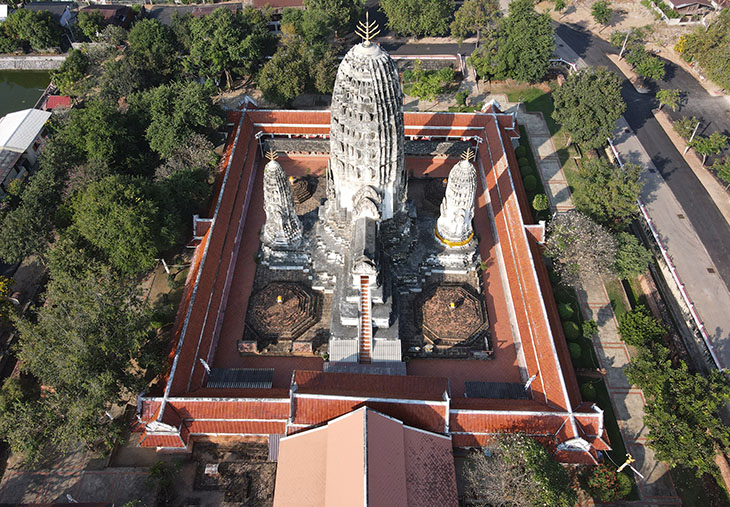 I trekked up those steps because I’d read somewhere that the interior was worth seeing. Hmm, really. I wouldn’t know. Well and truly locked. Perhaps I was too early. But those steep steps gave my legs something to complain about for the rest of the day. The handrail was at about knee level, requiring some strange contortions to get down there safely. 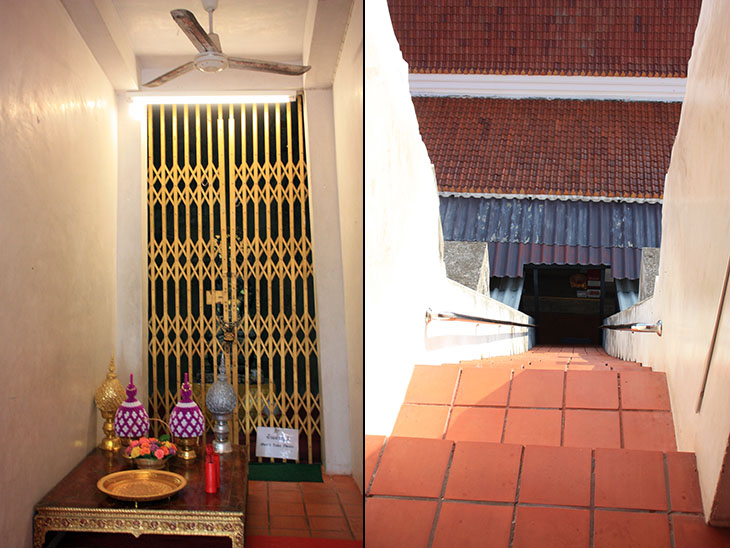 To be honest, there’s not a lot to see. The interior of the main building is nice, and it’s interesting to realize just how old the place is, but thirty minutes plus flying time was enough. 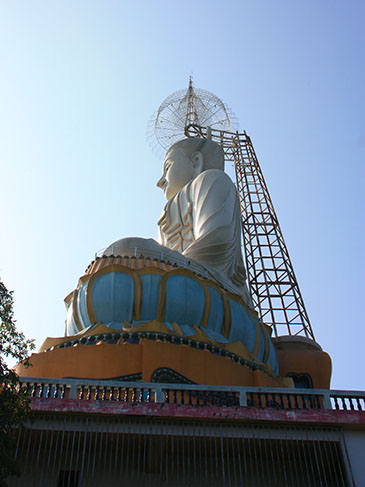 And so, on to Wat Nong Noi, about 12kms outside the city. Its claim to fame is a giant Buddha statue on top of a hill. Yes, another one. This one dates back to 1873.

At the base, you can’t really see that much. I’m told it is covered in tiny tiles, but I couldn’t see any evidence of that from the bottom, nor the aerial views. Pretty impressive nontheless. 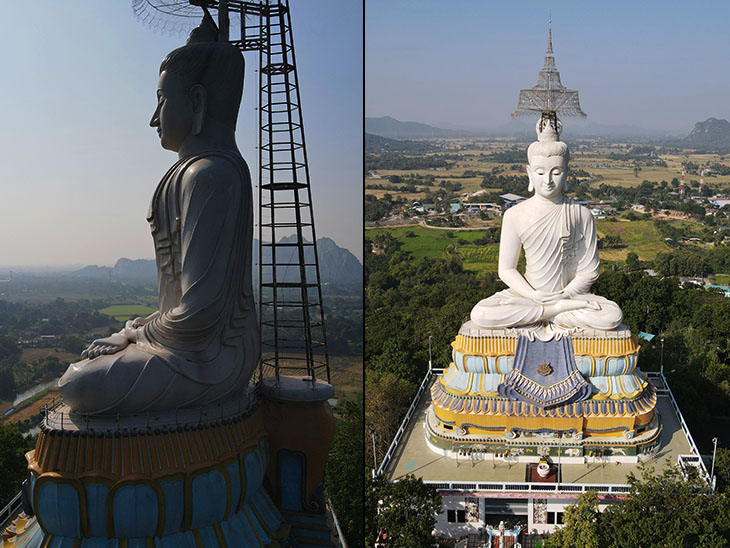 Then it was a few kilometers north to Wat Khanon Nang Yai and the Nang Talung Museum. I was looking forward to this but wasn’t too impressed.

You said you were only going to mention the best bits. Ed.

Another brief visit was Wat Yai Nakhon Chum. A nice setting by the river… 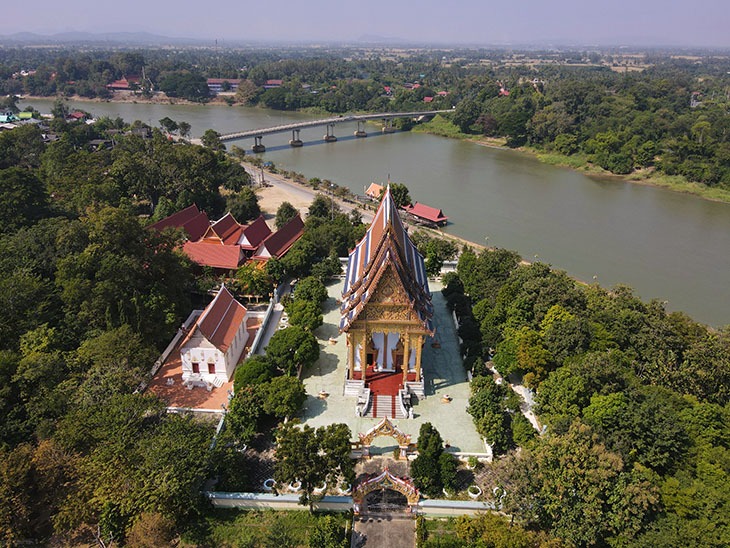 All the gates were closed but I did sneak inside, where I found some people who were moving an old wooden cart. The young lady you can see skipping off to the right of the picture below suddenly plucked up courage to stand next to me for a selfie. Actually, if she’d stood any closer she could have ended up pregnant. I think she liked me. 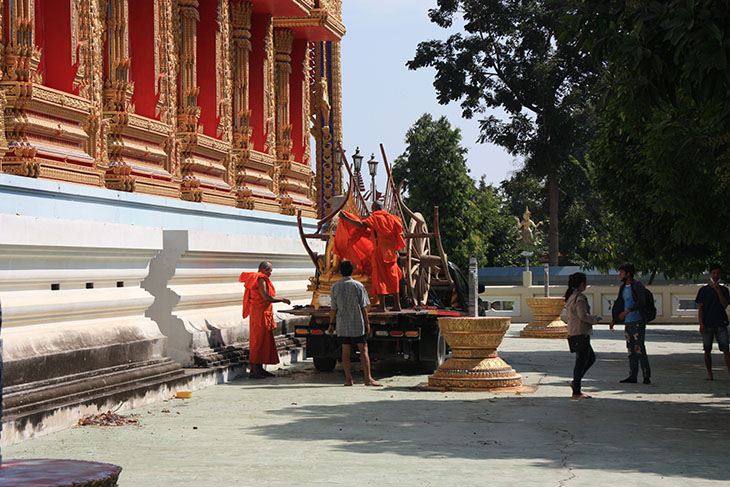 The next wat (I warned you didn’t I?) and the last in Ratchaburi province was Wat Pho Ratthanaram. This is impressive. The ubosot is clad in etched sheets of stainless steel. 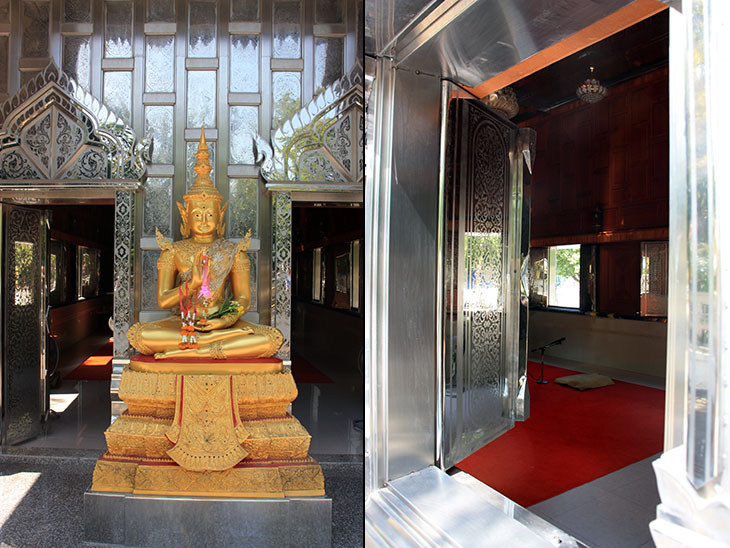 I won’t show you any aerial shots because I think the designers hadn’t counted on people having drones, and the roof is some boring dark material.

And next it’s time for Kanchanaburi.