It wasn’t the end of the trip, but it was the last day of seeing anything interesting.

The total trip was fourteen days, and it’s taken me 63 days to write about them. Oops.

After day 12 the final two days were spent driving home. Nothing really to write about. Well, except that Ms. Chuckles again ignored my instruction not to take me though the middle of Bangkok. This turned out to be a GoodThing. There was minimal traffic and we sailed through the city unimpeded. Views were great.

Going directly from Chiang Mai to Tak would have taken less than four hours, so I figured I had about the same amount of time to do some tootling.

First I stopped in Lampang about ninety minutes out of CM. Not for the first time, I decided I really like this place. I should have spent a night there. It doesn’t have any “Oh Wow” “Must Visit” “Bucket List” places, at least, not in the city. It’s just a nice laid back casual take-your-time linger here linger there use your feet not the car type of place. There are coffee shops that all look like they must have the best coffee on the planet, restaurants that are insisting you must eat in them, tiny streets that have to be explored, minute bookstores, antique shops, river views, etc., etc.

But, I didn’t do any of that. I hit a couple of temples and kept going south. Next time.

This turned out to be a no drone place. I’d failed to notice the airport runway was in the middle of the town, and that this temple was directly under the flight path. Daft place to put it. I didn’t know this until I tried to take off, and couldn’t. At least it’s nice to know DJI protects you from your own stupidity. I probably could have gotten authorization to fly up to 50m, but that’s best done in advance.

Anyways; a number of websites insists this place is more than a thousand years old. Hard to believe… 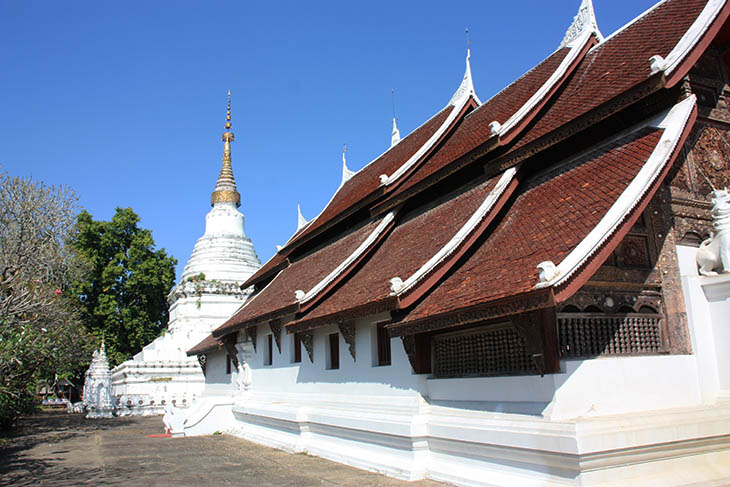 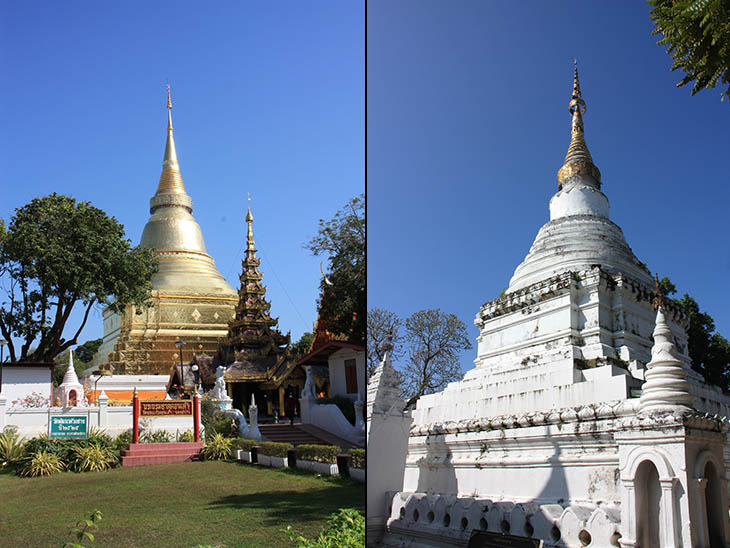 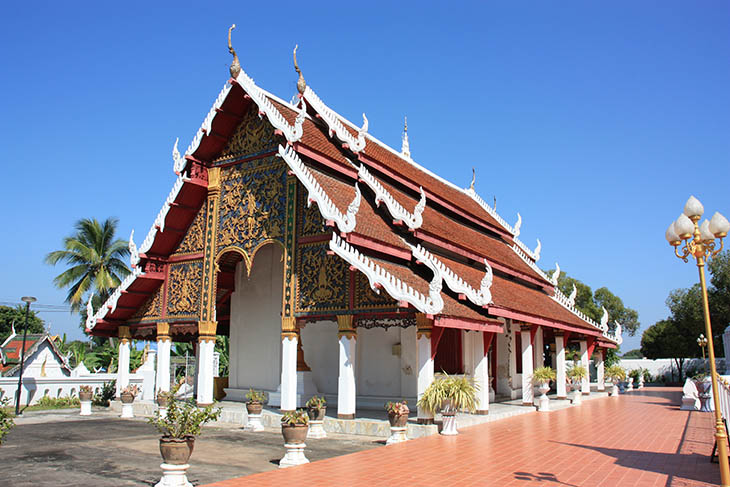 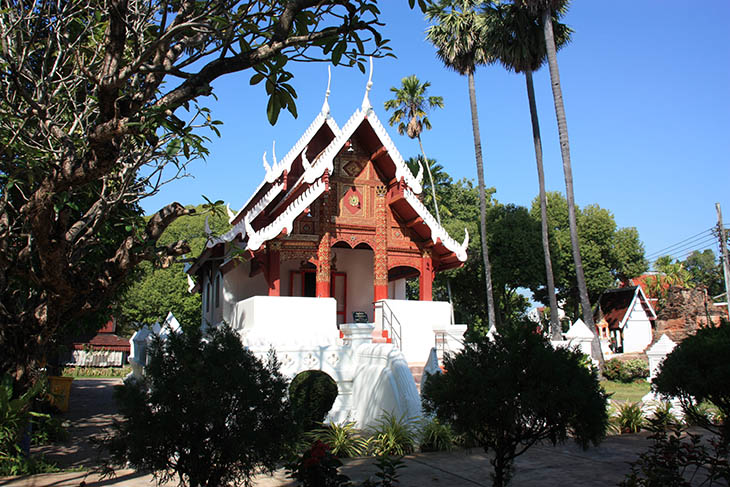 One website says “There is also a vihara with many Lord Buddha statues and senior monk statues inside. You should admire how beautiful they are.” So, do as you’re told… 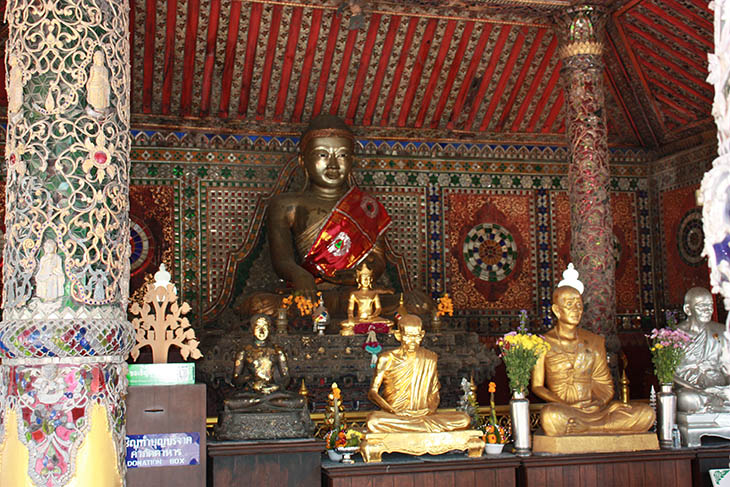 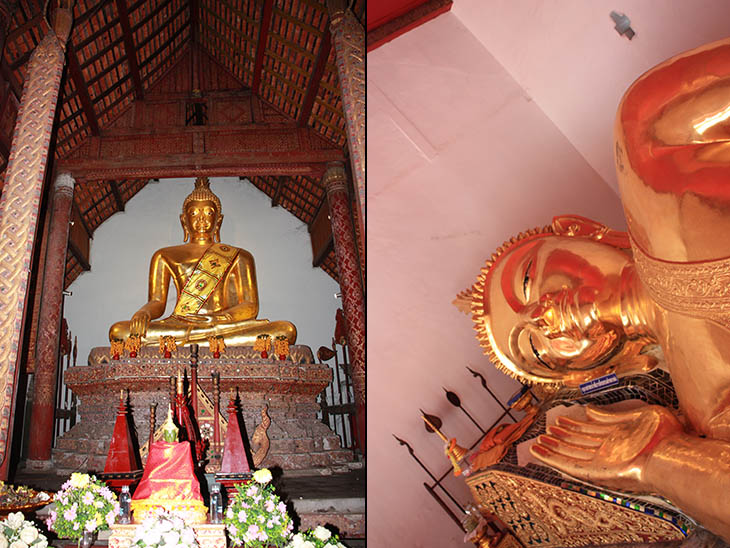 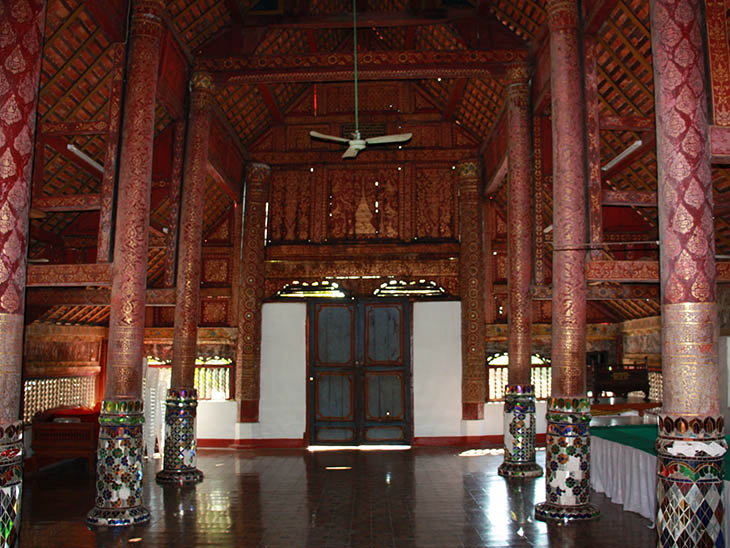 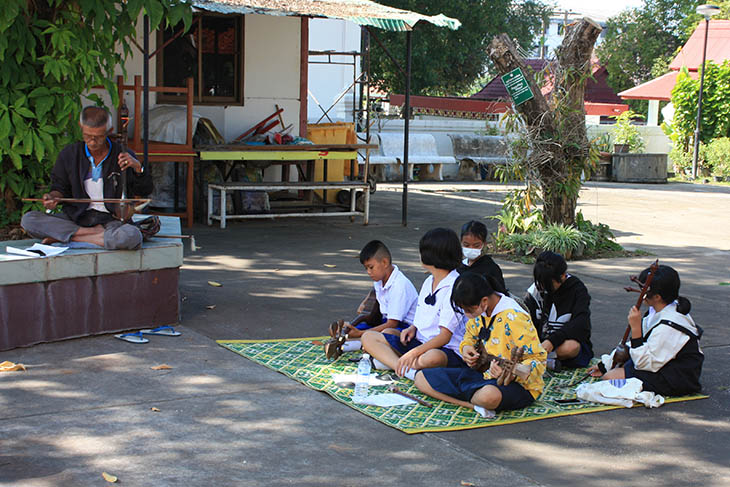 And this poor guy’s look of anticipation turned to disappointment, as I waved and kept walking, and he realized I wasn’t his first customer of the day. The horse was ambivalent. 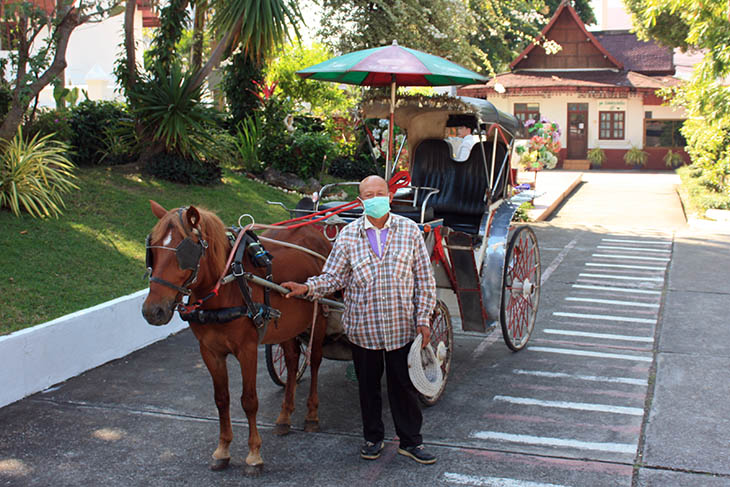 Yes, I know I said “a couple of temples” but the other one I’ve covered before. I just wanted to stop and get some aerial shots, which was okay since it was outside the city.

From Lampang I could have gone due south to Tak. I probably would have arrived mid-afternoon. But, enticingly, about an hour to the east is the ancient city of Sukothai.

I wasn’t silly enough to think I had time to visit the whole place in half an afternoon, but I was wise enough (and modest enough) to realize I could poke my nose in to decide if I ever wanted to see more.

So, about an hour north of Tak I headed across country to reach the outskirts of the historical park.

Now, when I say “historical” I mean proper historical! It was founded during the 13th and 14th centuries CE but parts are thought to be much older. In the 70km there are 193 ruins, walled palaces, temples, and a whole lot more.

Although most tourists head for Ayutthaya, which means it’s way too busy, I think I prefer Sukhothai. Ayutthaya was pretty-much destroyed by the Burmese army in 1767 and has since been rebuilt. Okay, 1767 is a long time ago, but the 13th century is a much longer time ago! And, it’s not swamped with tourists.

I decided the best way to have a quick look-see was from the air. I figured if I could see a lot of the park, and it looked mostly interesting, I’d be back. It does, and I will. The area of the park, by the way, is as flat as the Netherlands.

So, first, an aerial view of Wat Sa Si… 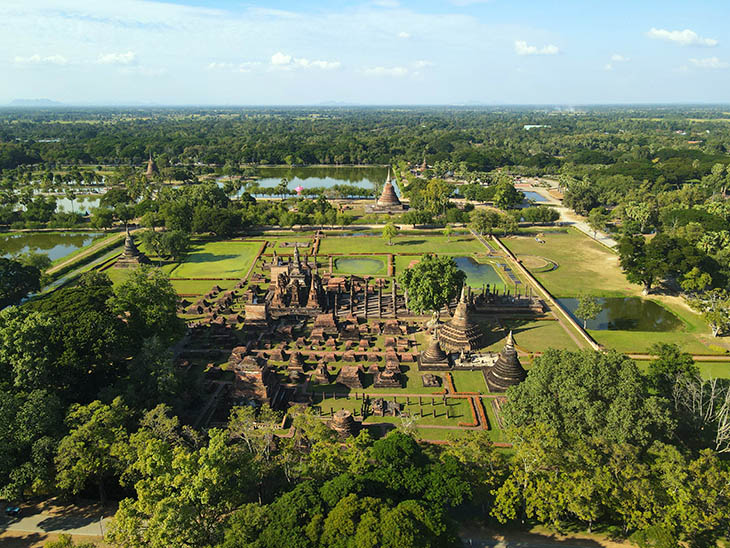 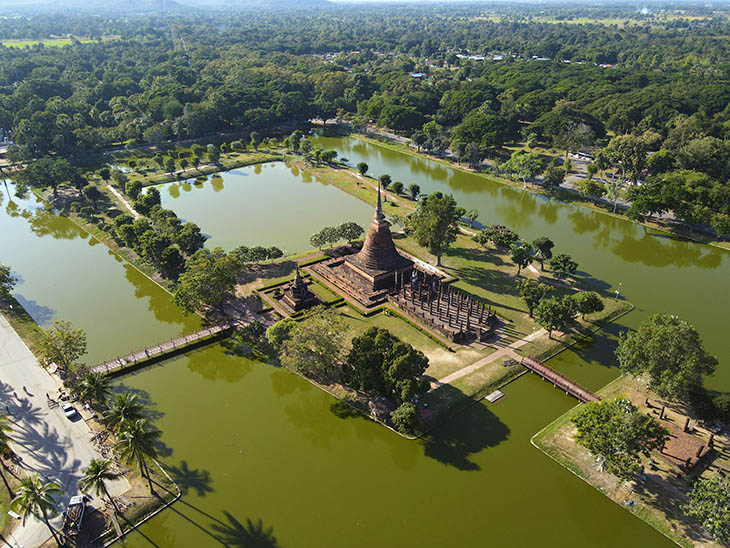 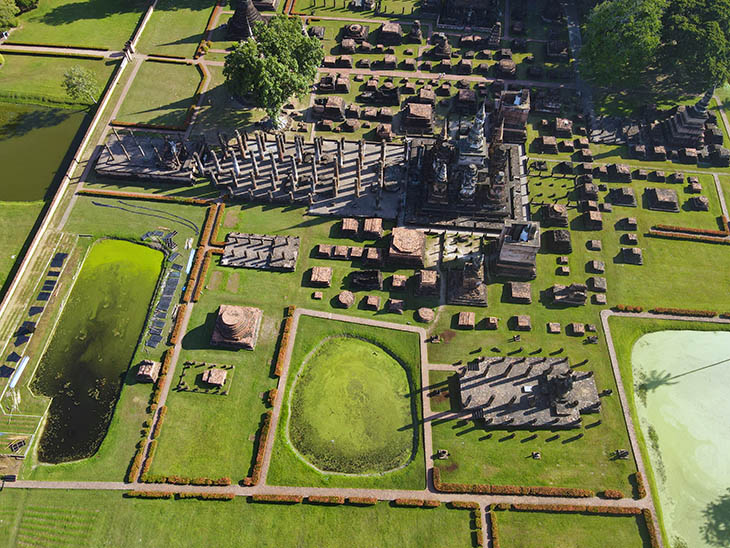 Then I moved over to… 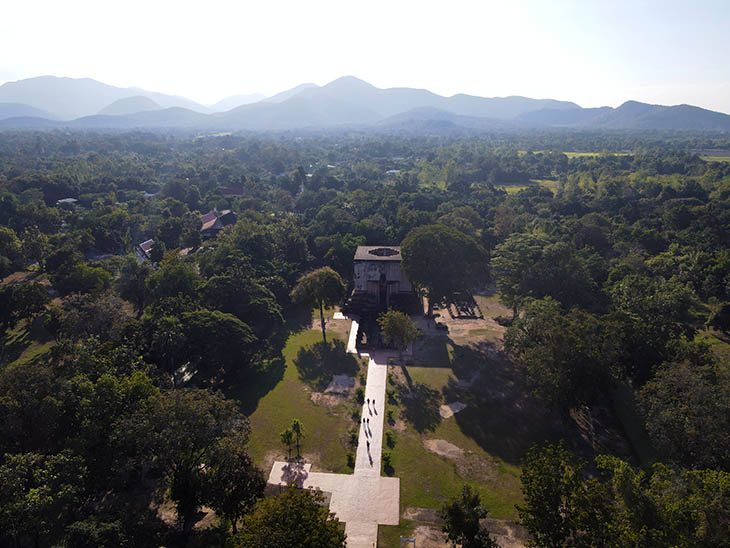 …but actually, I didn’t notice at ground level. 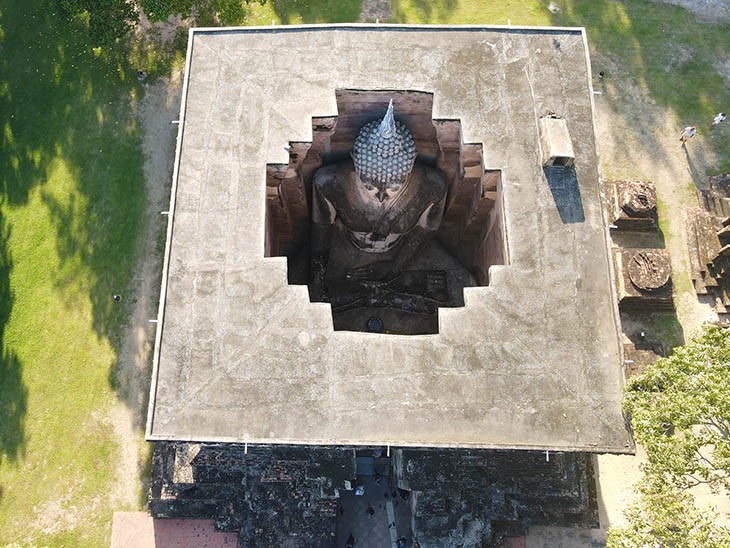 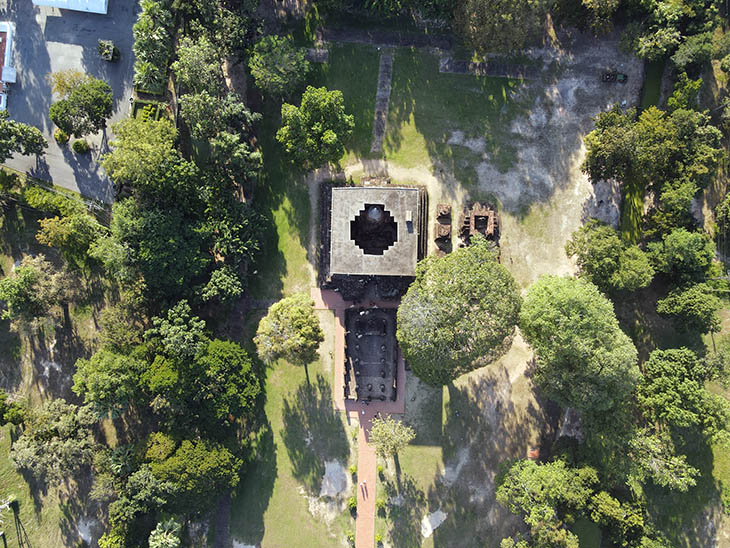 …and so the Buddha statue gets wet. But I guess he enjoys the sunshine.

That’s it. Trip finished. Where next?