…Assuming I Win The Lottery!

A couple of articles ago I mentioned I would need a new drone. Mimi my Mi 4K drone, is now retired due to the non-availability of reliable new batteries. That leaves me with only one drone capable of taking cinematic video, and as I discovered a long time ago, if you’re serious about aerial photography and/or videography, you should never have only one drone.

There are many reasons. A variety of technical glitches can pop-up when least expected, and there’s nothing worse than driving for three hours to shoot some video and discovering you can’t. Even worse, you can discover you’ve had a senile moment and forgotten that all-important cable that connects your remote controller to tablet or phone. These things are absolutely not good for the blood pressure. Having at least two of everything – and preferably different types of drones – very much minimizes the chance of not being able to fly.

So, I started to think – what next?

Sadly, the choice is limited here in Thailand. Several dealers and on-line stores stopped importing when the Thai government introduced a complicated registration process. And the Customs Dept. stopped allowing the import of drones that didn’t have the correct authorizations and paperwork. In some ways that makes my choice easier, because I can immediately eliminate a number of possible drones from my wish list.

And it is a wish list because there are several drones I’d like to have but can’t justify buying, unless someone decides to give me oodles of money to shoot for a big budget movie. The first two on my list definitely fall into that category.

Before I discuss them, a word about pricing. I’ll mention approximate prices in US$ for comparison purposes. Actual prices depend where you are, and whether or not there are special deals or coupons available. 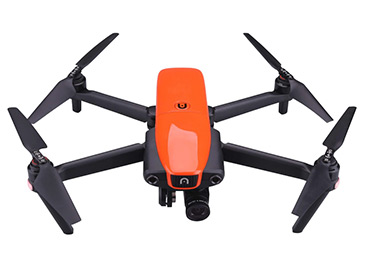 What’s the first thing that hits you in the photograph? Yes, it’s orange. Actually a nice matte orange. And tell me, what’s not to like about orange?

Why do 99% of drone manufacturers choose black, white or any shade in-between. Get the thing in the air 100 meters away from you, and you’ve lost sight of it. Now, orange. If you can’t see that at 100 meters you need your eyes tested.

Anyways my favorite color spectrum is anywhere between deep red and bright orange.

The next thing that hits you is the price. About US$1500. And that’s for the plain vanilla Evo II. Yes, I’ve just realized I’m not supposed to call it the Evo 2. And yes, there are other models, but let’s discuss the vanilla one first.

Another thing that slaps you in the face (this is starting to hurt. Ed.) is the fact it can shoot 8K video, also called Ultra HD. That’s 7680×4320 pixels. Not only that, but the camera can capture 10-bit color depth, which probably means nothing until I tell you that’s more one billion different colors.

But … who needs 8K 10-bit, along with high dynamic range or HDR? Not many people, but it sure would be nice to have.

I could certainly make use of the high image resolution. 8000x6000px. If I post an aerial photo on Facebook, it’s usually 2048x2048px, or on Instagram 1080x1080px. That means I could shoot an image with the Evo II and be able to select just a small part, or even several parts, and still have a high resolution photo. You could probably cover a whole wall with an 8000x6000px photo with perfect clarity.

But there’s so much more. How about 12 vision sensors, which really means 12 high resolution cameras. These are used for obstacle avoidance. That’s two on the top, two on the bottom, front, back and two on each side. Then there’s the claimed 40 minute flight time, which probably means a little less than 35 in real usage, but still impressive. And a range of 9kms. If you’re flying line of sight, it needs to be orange!

The remote’s pretty nice too with its informative screen… 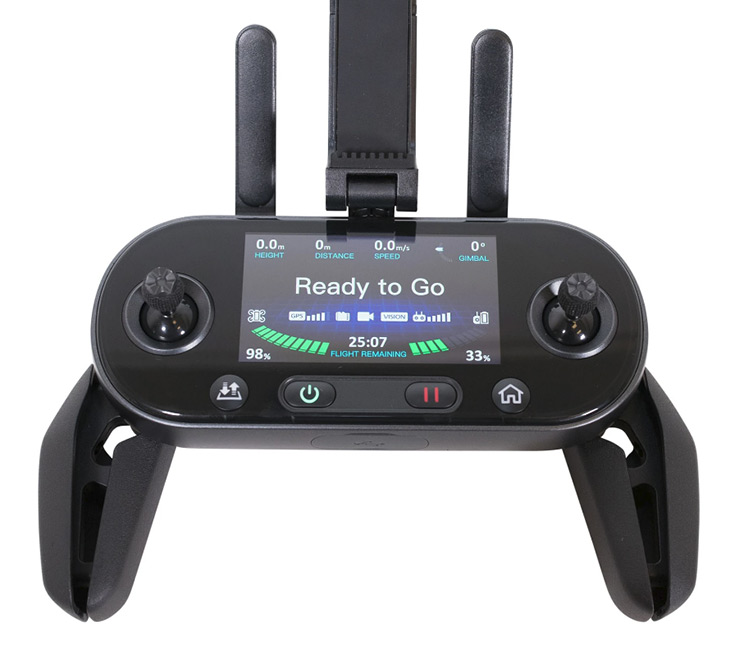 Oh, and it folds… 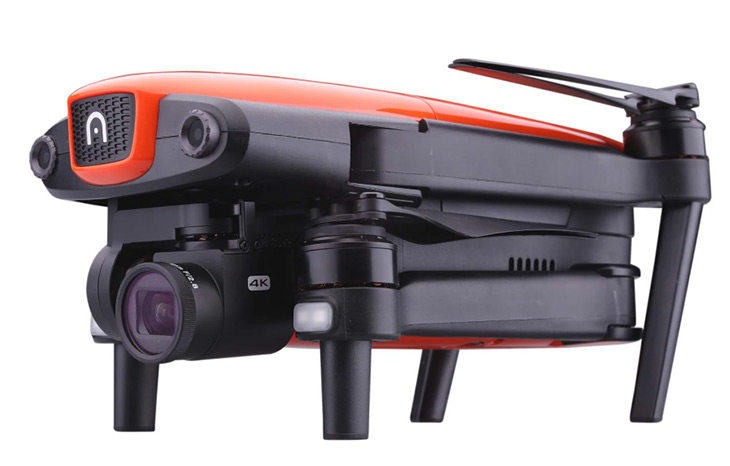 And then there’s the options. You see, the camera is removable. So you can choose 8K, 6K on the Pro version or 8K plus thermal imaging cameras on the Dual version. That’s why I quoted the price as “about.”

Well, maybe Santa will think I’ve been nice this year. I haven’t, but what does he know?

This one is a 2, not a II. Maybe that’s deliberate so no one gets confused.

But I am confused.

The Skydio 2 has so much built-in intelligence it’s almost a flying super computer. I can’t help feeling, at this stage in its development, its a solution looking for a problem.

Does that make it expensive? Well, at a quoted price of US$999 it’s not cheap. But at that price, it doesn’t come with any means of flying it!

Skydio will say “Hey, you can use your phone.” And I will say “Hey, if you’ve ever used a phone to fly a drone, you’ve almost certainly joined the club of those who have crashed a drone.” Not recommended. So you have a couple of options. You can buy a very standard-looking remote controller for US$179 – to which you attach your phone… 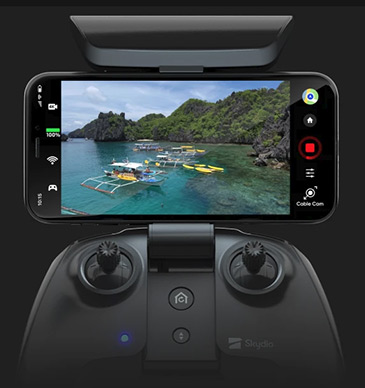 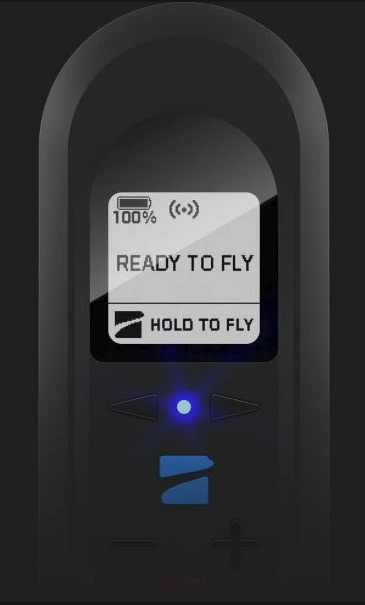 Now, if you’re reading all the words, and not just thinking here he goes again babbling about drones, you have to be wondering – what’s a beacon?

As far as I can figure, you can do two different things with it. It’s about the size of a TV remote, so its easy to carry with you. If you do, the drone will track you, from behind, in front, or at the side. Your choice. Or, it has a mode where you can point it at the drone, and the drone will move to wherever you are pointing. Did I mention a solution looking for a problem?

Now, as I said earlier, it has so many sensors, cameras and computing power, it’s supposed to be impossible to crash into anything. But if you do manage to achieve the impossible, as several reviewers have, Skydio will replace your drone free of charge. Watch out for “Terms and Conditions Apply.” Hmmm.

You’d think that would mean you could shoot incredible video, as you swoop through impossibly small spaces, branches, doorways, whatever. And you can, sort-of. The problem is, when the drone reaches a place where it has to figure how to get through obstacles, it stops. Looks around. Figures the best way. Then proceeds. That doesn’t make for compelling video.

Once Skydio figures out how to do this seamlessly, it will be a stunning drone. For now, I think it’s amazing capabilities would be fun to play with, but that’s a hell of an expensive toy. I’d rather have the Autel Evo II.

Another “2” not “II”. Pricewise, we’re getting down to the affordable range. It comes in two flavors, Combo and Single versions. The “single” means you get everything you need to fly, but nothing else. The “combo” version has a carrying bag, extra props, ND filters, and most importantly, two extra batteries with a charger that will handle all three.

So, what’s good about the Mavic Air 2? Well, several reviewers have called it “The only drone you’ll ever need to buy.” And guess what … they’re wrong. If they said “…need to buy in the next few years” I’d probably agree. The technology changes so rapidly, there’ll never be a long-lasting drone.

The Air 2 could be described as a larger version of the Mavic Mini, but that’s only visually. Like the Mini, it folds. It has way better connectivity than the useless WiFi of the Mini. It has a way better camera. The battery life, range, in fact almost anything you can think of are way better. But it’s not orange!

One big improvement over the Mini is that it has obstacle avoidance. Which is nice. But. Why only front and back? If I’m flying forwards, I can look at the screen to see what I’m about to fly into. If I’m flying backwards, I’ve probably just flown forwards to get there and haven’t hit anything. Where I really need the sensors is everywhere else… sides, top and bottom. Oh well, maybe they’ll be on the Mavic Air 3. (Yes, I know they’re on the Mavic 2 Pro and Zoom, but at a different price level.) 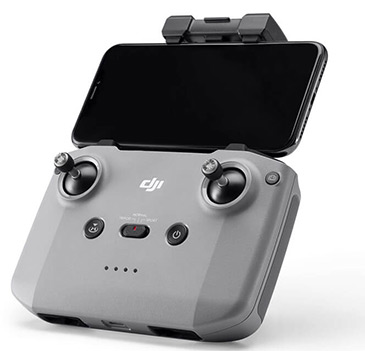 If I had one reason to buy the Air 2 – no, make that two reasons – it would be the size and the camera. Reportedly, the larger size and weight make it a stable flyer even in medium winds, and the camera can handle 4K video at 60fps and 48MP photos, all with a half-inch sensor. Impressive.

Oh, and it also uses the same app as the Mavic Mini – with lots more features enabled. For me, that flattens the learning curve.

I can’t believe I’m even thinking of buying another product from Fimi. I loved flying the Mi 4K but it suffered from a long string of bad batteries, contributing to several crashes and one drowning. The drone, not me. And, without telling anyone, Fimi stopped supporting the app, which meant I was suddenly not able to use my iPad. My really, really, really old Android phone came to the rescue – and actually worked rather well for several months. 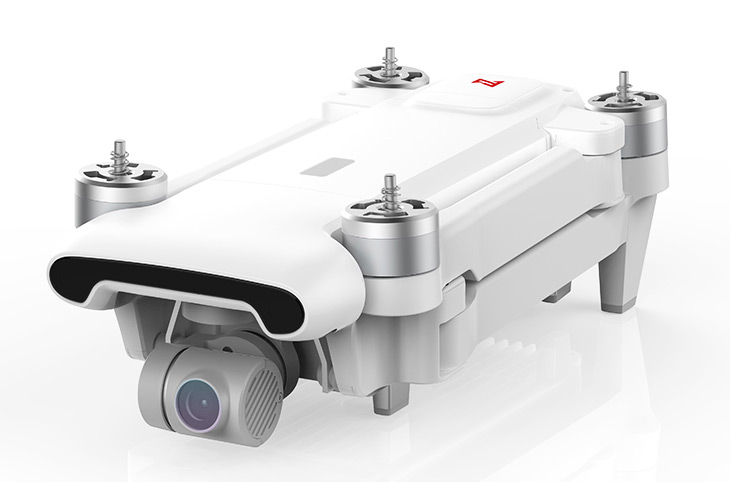 But no. Not for me. I’ve bought at least twelve Mi 4K batteries at between US$100 and 150 each. Fimi has had enough of my money.