So, one day during the rally I was manning a Passage Control in the middle of nowhere… 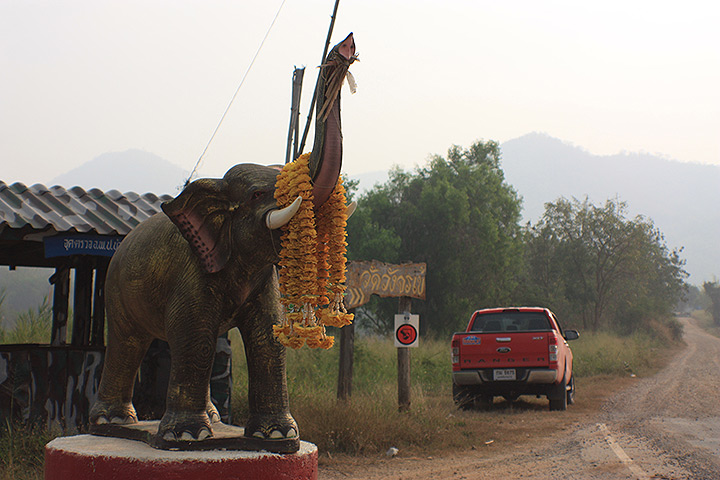 The picture is typical of anywhere in the middle of nowhere.

Then, along comes one of the rally organizers with the Control Boards, watch, time card, etc. He sticks the red Stop Board where you can see it above, and looks for somewhere to stick the yellow Control Warning Board.

“Whatever you do” I said “don’t touch the elephant.”

“It’s a sacred object” I told him, trying to seem knowledgeable about such things. “We’ll be in serious trouble if you stick a board on him.” So he found somewhere else.

Then when all the fun was over, i.e. all the rally cars had passed, I collected the boards, jumped back into Bert and started to reverse into the road on the left, so I could go back the way I’d come.

And, you probably guessed what happened next. My right rear bumper nudged the red concrete base. Reversing in Bert is not the easiest of things. Visibility is very limited.

But, no problem, I thought. I barely touched it. And I headed off down the road, glancing the rear view mirror. Which gave me just enough time to see the elephant do a Sadam Hussein statue imitation, as it toppled head first onto the road.

“Holy cr*p” I thought “I need to get out of here real fast.”

Then I got a fit of the giggles. It seemed like the ultimate irony having told the guy not to stick the board on the elephant, and I’ve just sent him trunk over hooves onto the asphalt.

The odd thing is, I can’t figure why it happened. I think you’ll agree, he looks pretty sturdy and stable. But he must have been made of plastic or polystyrene or something. As far as I could see as I sped away, he wasn’t damaged, and no doubt he’s been restored to his rightful place, suitable prayers have been incanted, and drivers of Red Ford Rangers have been damned to hell.

I don’t feel too damned. In fact, I still can’t stop laughing.