Day 11 was spent tootling around the extreme northern parts of Chiang Rai Province and Thailand. But I never did find The Most, nor do I even know what a Most is! But it’s clearly shown on Google Maps…

I assume they’re trying to say it’s the northernmost point of Thailand. But it clearly isn’t. If, on the map, you follow the Burmese-Thai border line to the east, you can see it moves further north. Mae Sai, the town where the “Northern Most” lives is at 20.44degN, whereas further east the border line goes to 20.46degN. But the latter is in the middle of nowhere, so Mae Sai is at least the northernmost town in Thailand.

I feel a bit cheated. I went all that way, and only now I realize it’s not the northernmost point in Thailand. Oh well, I’ve no desire to go back.

Let’s backtrack a little. The road from Chiang Rai city to the border is relatively straight and flat. But on the way, I did have a fit of the wiggles, when I went up into the mountains to visit Doi Tung Gardens. I wished I hadn’t. Despite it being early morning, and the fog was only just starting to lift, not to mention the fact it was freezing cold at 1300m and I was still wearing three layers of clothing, it was swarming with tourists.

Parking areas were overflowing, and the line of people waiting to buy a ticket just to look at some flowers must have been a hundred long. I decided to escape. After a quick u-ey, I made an illegal stop to poke my iPad over a hedge and take this… 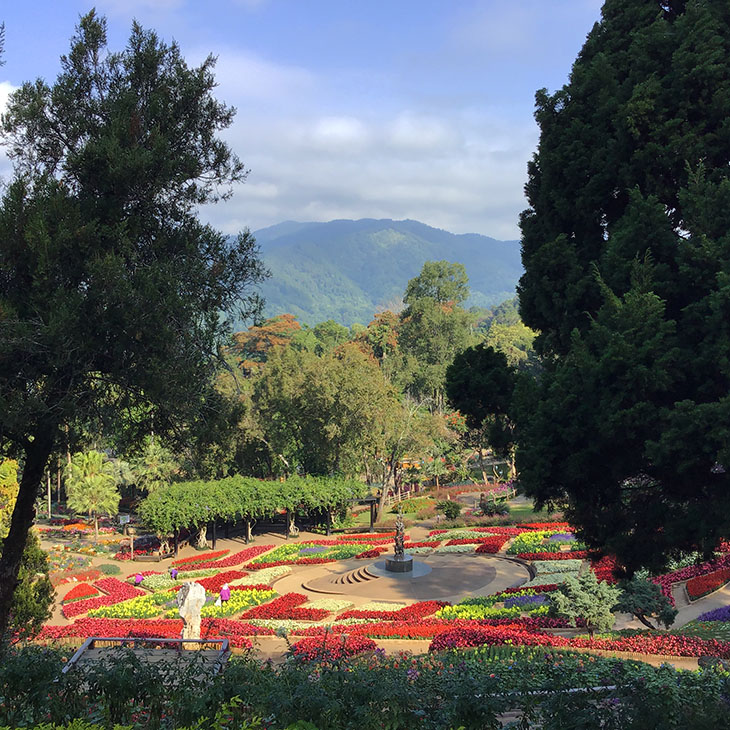 Yeah, nice enough, but it wasn’t how I’d planned on spending my morning. An hour of flowers would have been okay, but it looked like it would have taken an hour just to get in.

Meanwhile, back in Mae Sai, I took a photo of the northernmost border crossing, which of course during these times of covidness, was well and truly closed… 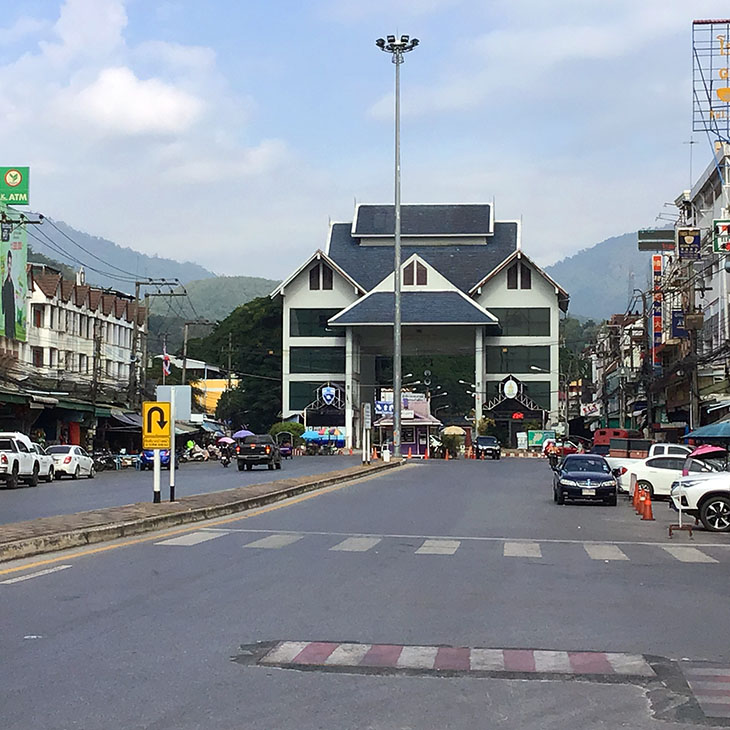 Strangely; although you can make a u-turn in front of the building, there’s also a tiny road which goes off to the left next to the building, then makes a sharp right underneath, and pops out the other side. And, talking of tiny roads…

I decided to visit Wat Tham Pha Chom. It’s to the west (left) of the Customs and Immigration Post. Ms. Chuckles said I had to drive towards the border and turn left just before I reached it. This is the road (photos courtesy of Google Maps)… 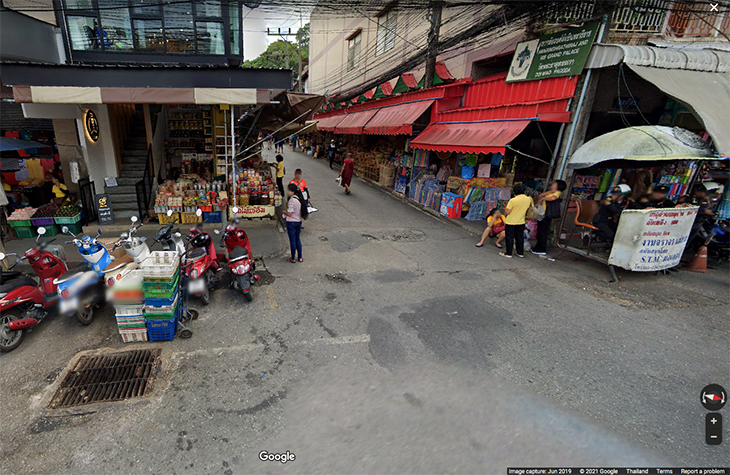 It’s kind of narrow, I thought. But suddenly things got silly… 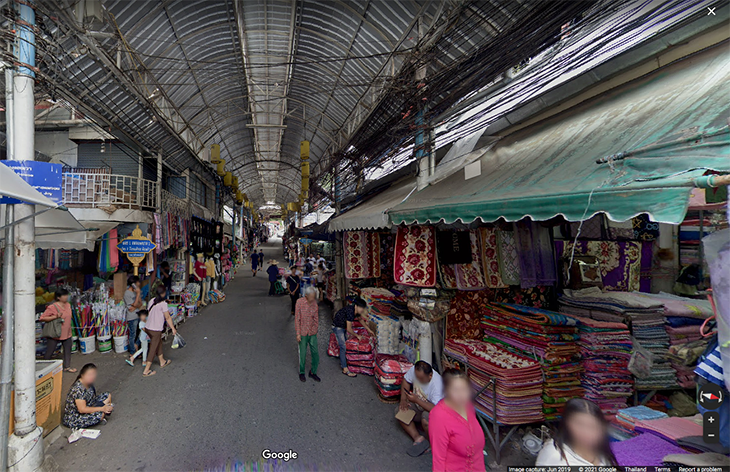 It became a covered arcade type of market, with all manner of wares on offer. It went steeply uphill, and was so narrow I pushed the button to fold-in the door mirrors. I had visions of arriving at the top with an array of knickers, umbrellas and handbags hanging from the mirrors, and with a row of irate stallholders chasing after me. That bit was to come later.

So, I reached the wat, and decided I didn’t want to visit there after all. It was clinging to the side of a hill, with nothing visible without extensive walking. So I bailed out and headed for another wat.

Ms. Chuckles said I had to go back down through the market. There were no signs saying I couldn’t, there was no one coming up, and there didn’t seem to be any easy alternative, so it was time to fold-in the mirrors once again. Travelling at about 5kph everything was going fine, until another pickup truck turned in off the main road – saw me – and stopped.

As you can see, it’s a little wider at the bottom, so I figured I might be able to squeeze past. But oh no, that was too sensible. He then started coming up the hill straight at me. Of course, he then had to stop.

We stared at each other. The stallholders stared at both of us. I opened my window to see if someone would politely tell the driver to go back, when this triggered a lot of shouting – at me. The collective opinion was that I should go back. Ha! Were they nuts?

To me it looked like mission impossible. Steeply uphill, in reverse, using only the rearview mirror for guidance? I would have destroyed half the stalls in the market.

So I closed the window, and sat there. And sat there some more. Until everyone understood, loud and clear, that I wasn’t going anywhere. At this point, a simple solution appeared. The stalls holding clothes, rugs, and goodness know what, were all on wheels. The stallholders rolled a few things around until a truck-sized gap appeared. The other driver nipped in smartly and I continued downwards. I had the distinct impression this was a regular solution, and everyone was playing the popular game of let’s piss off the farang.

Well, I figured the score was Farang 1, Stallholders 0.