…But Not Wat Khao To.

A couple of years ago, on a return trip from the west coast of southern Thailand, I spotted a tall golden tower. It took me a long time to find the entrance to the temple complex, and when I had, I didn’t really know where I was. I checked Google Maps later, and the only thing I could find in that area that was wat-ish was something called Wat Khao To. “That must be where I was” I thought.

A couple of months ago, on a similar return trip from the west coast of southern Thailand with a Thai friend, I asked her if she’d seen the place – explaining the stunning nature of the architecture, and wondering if it had been completed. She knew nothing about it, so we plugged Wat Khao To into Google Maps, and ended-up at, you guessed it, Wat Khao To. “That’s not it” I complained.

Fortunately, Google Maps now shows Wat Bang Thong, the one with the golden tower, so we back-tracked about five kilometers, et voilà.

Now, if you happen to remember my original article you may recall that with the the wat being under construction and in the middle of nowhere, the place was deserted. Not so any more.

Unfortunately we arrived on a Sunday morning, along with the rest of Krabi province. It’s a good job they’ve built a large parking area. Here’s some before and after photos, or perhaps then and now would be better… 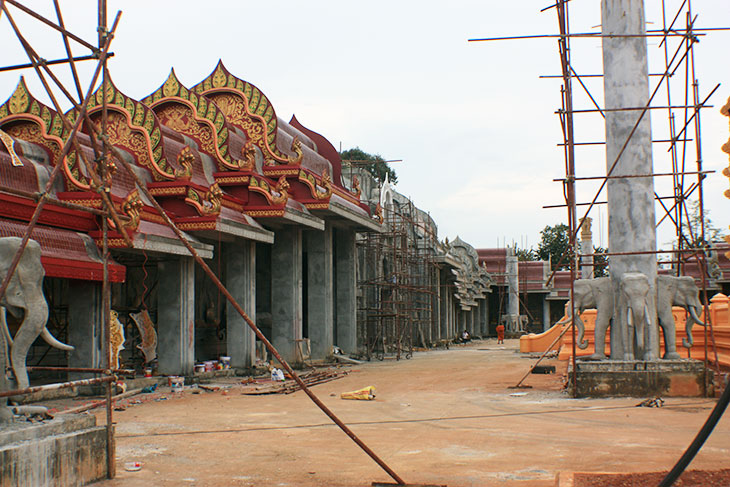 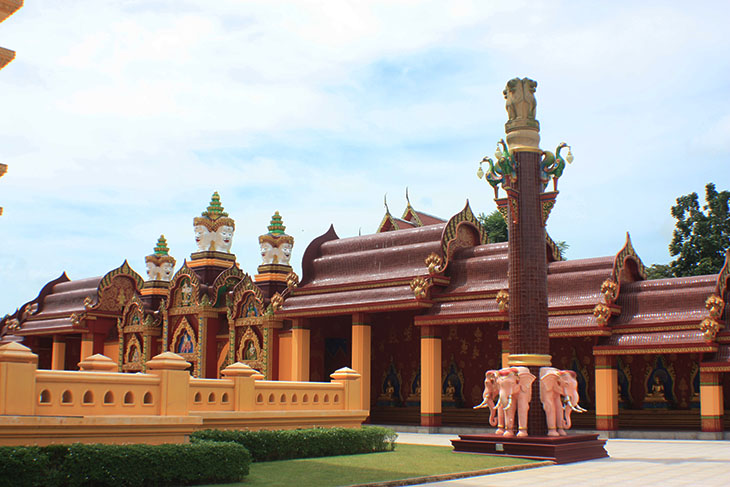 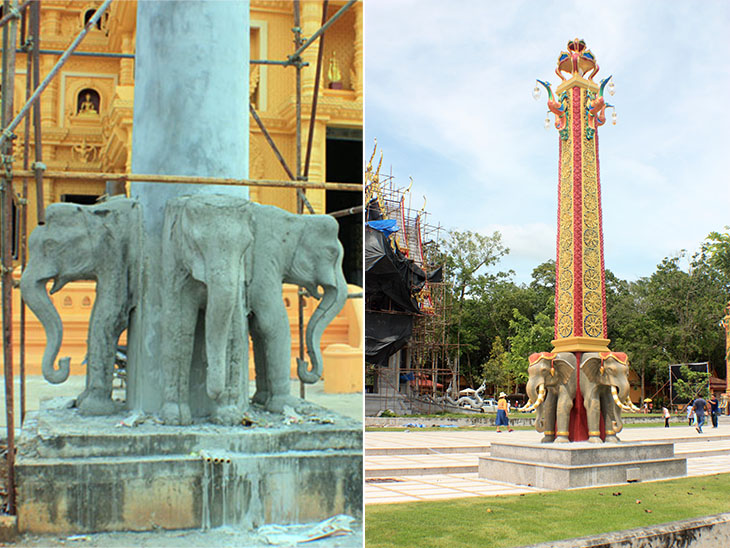 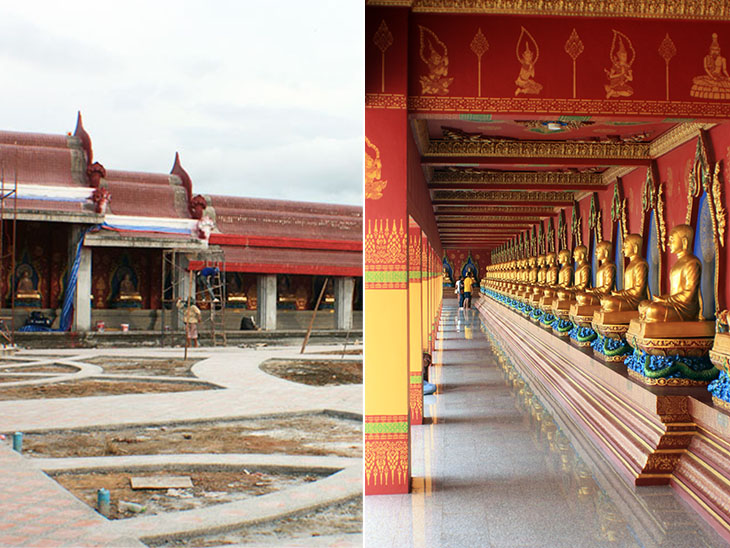 Actually, the place still isn’t finished, and the only useful information available says it’s taken ten years so far, with another five to go. You can see from the outside that major work has been done in the past two years. What was bare concrete and mortar is now ornately decorated… 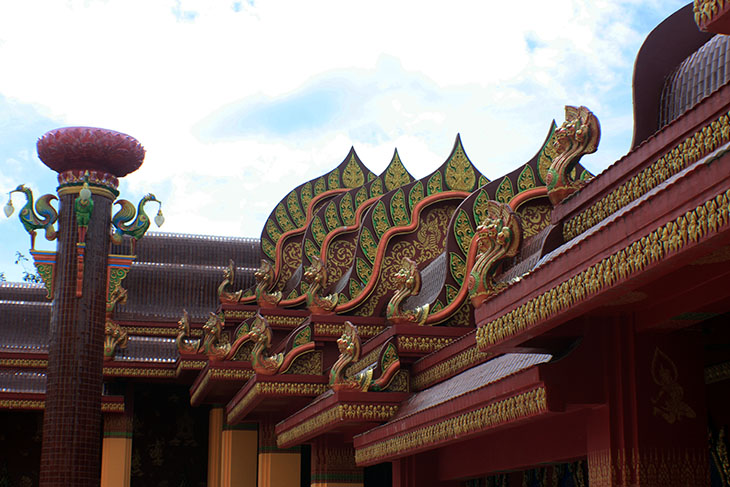 Two years ago I wrote “I’ve made a note to check back any time I’m in the area. I have a feeling that with a blue sky, fresh red and gold paint, and the landscaped courtyard, the whole place will be mind-bogglingly spectacular.” I wasn’t wrong. But what I hadn’t considered, which at the time was off-limits, was the interior.

Walking inside, minds weren’t just boggled. Gobs were smacked and gasts were flabbered. Take a look for yourself… 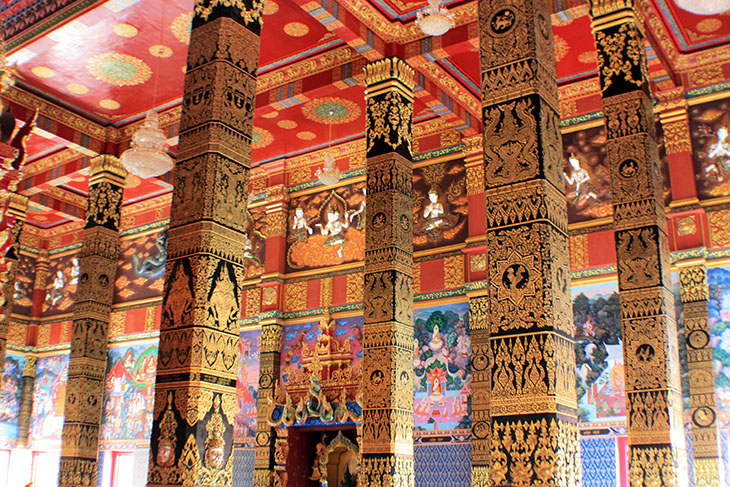 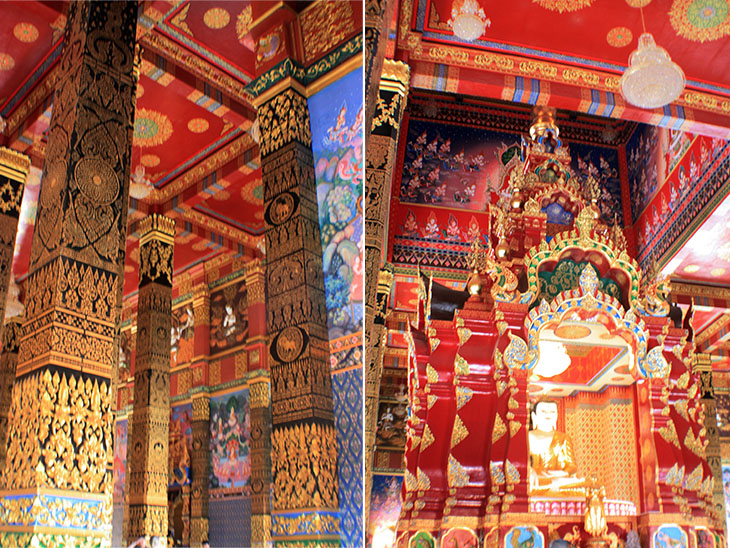 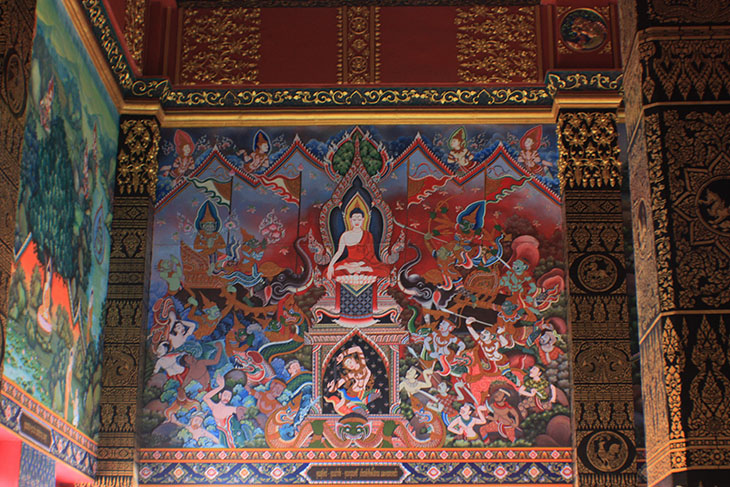 There isn’t a square centimeter that hasn’t been covered in the most spectacular coloring, to the point where you’d have to think at least the interior is finished. But for how long will it look like that? At what point will it need to be redone? I have a feeling this is another Sydney Harbour Bridge-like project. When they think they’re finished, it’s time to start over.

I took so many photographs I’ve had to put them into a gallery. Here’s the thumbnails. As always, click any one to view the full image, and scroll through at your leisure.

Hint: To save chasing the arrows on the photos, you can you the left/right arrows on your keyboard…

Of course, while I was there I was thinking – as any good drone pilot would – what a stunning place to make a video. When we asked for permission I was expecting to hear a resounding “No freakin’ way” – in Thai of course. But I was wrong. We received an enthusiastic “Yes.”

Now, even with permission, we still have respect the law of not getting close to people, so I’m thinking of an early morning visit. It opens at 8am, but a drone doesn’t need a place to be officially open. Easy enough to fly over the gate. Anyways, sometime soon we’ll find our way back there. My companion is also my drone-flying protégée and spotter, so we’re both looking forward to the trip. Maybe also taking in Wat Laem Sak which was also under construction during that same trip two years ago.