…A Boardwalk Through The Mangroves.

I know I keep saying some of the places I find are “in the middle of nowhere.” Well, this place really isn’t, but it sure feels like it is.

It’s about 34kms from Krabi town, and so not found by any but the most adventurous tourist – and me – but it’s actually only a few kilometers from the main north-south Highway 4 and civilization.

So, the place with the long name is a national park with a canal or channel running through it. That’s the “klong” (sometimes khlong) part of the name. And it has two types of water, fresh and sea. Or “song nam.” That just leaves “Tha Pom” which I believe is a kind of tree found in the area, the wood of which was used to construct the boardwalk (except the concrete bits!) and the many seats.

There’s a Bt50 entrance fee and Bt20 for parking, which seems more than reasonable considering the amount of effort that must have gone into building the place. 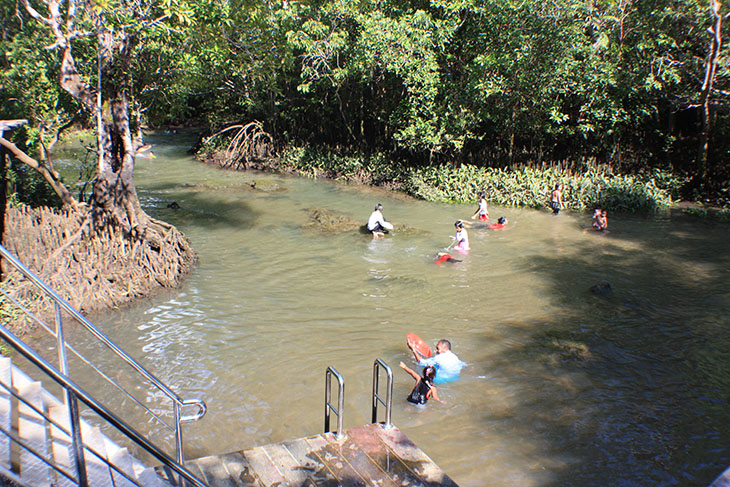 That’s fine. They were having a great time, leaping off the boardwalks and dunking anyone in sight. Further along, there’s complete peace, so there’s something for everyone… 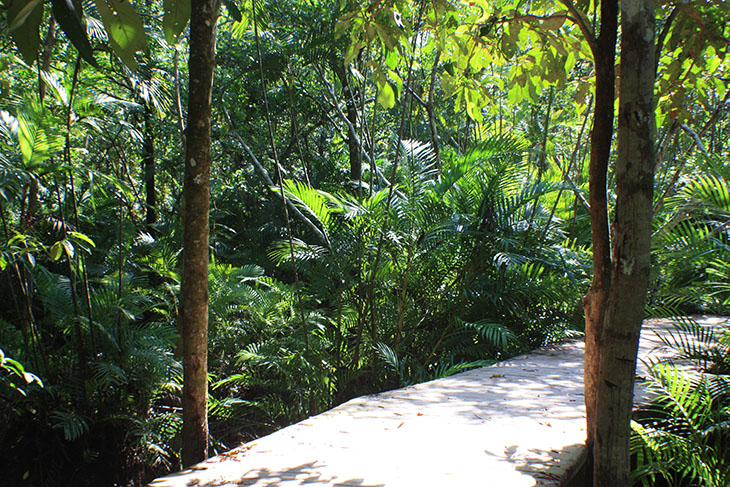 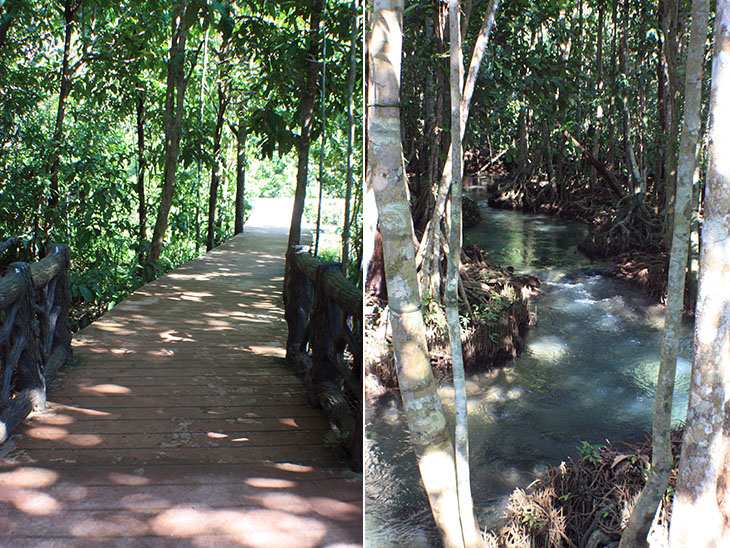 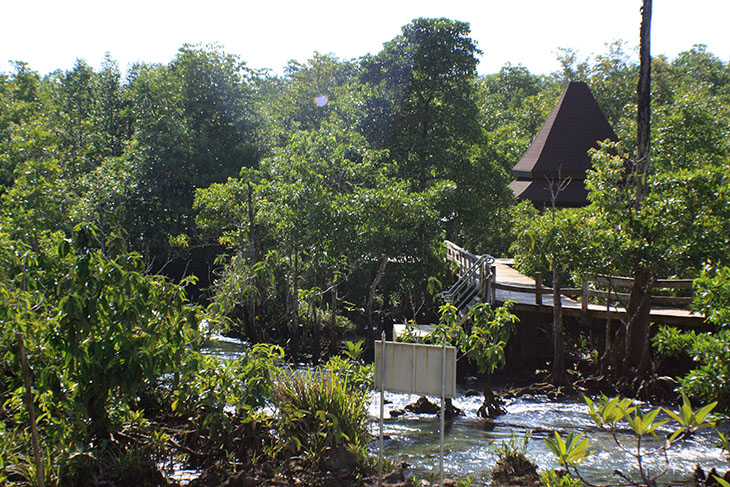 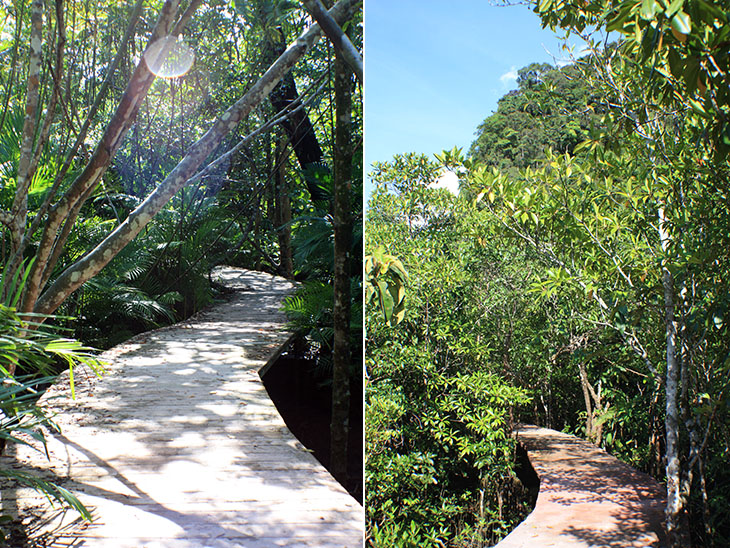 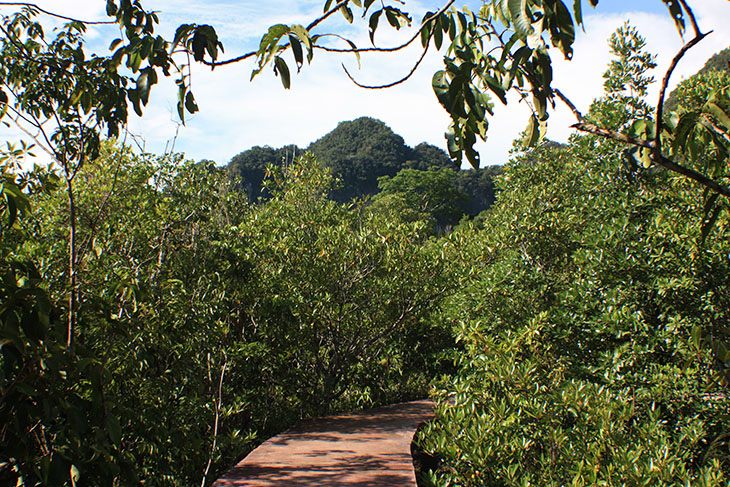 The water is the strangest blueish greenish grayish color. Some people call it emerald. I’m no expert on colors, what do you think?

Mostly the undergrowth seems to be mangroves with various palms interspersed. But the strangest thing is the root network… 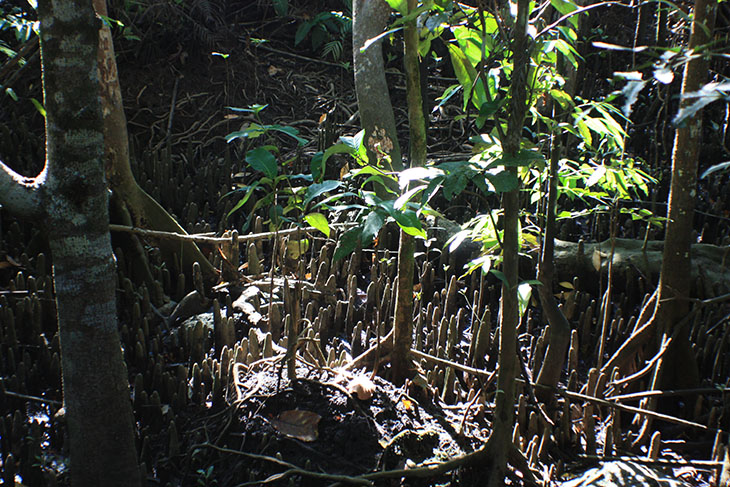 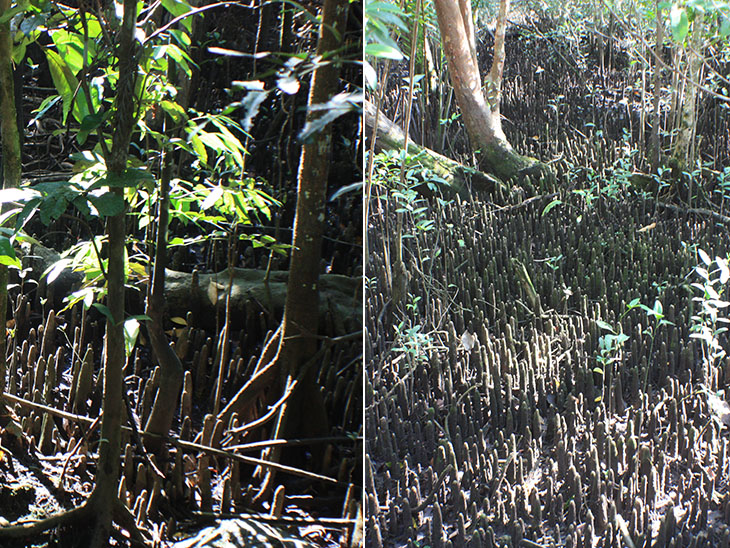 It’s like the roots started growing down, decided it was too wet, and so grew upwards instead.

On parts of the walk there was a constant, deafening high-pitched buzz from some kind of tree insect. But that would stop as quickly as it had started, and suddenly it would be deathly quiet. I found myself walking carefully so as not to make any sound. There must have been all kinds of creatures hiding in the trees somewhere, and I figured it was better if I didn’t disturb them.

But suddenly I heard a low indistinct rumble. I stopped dead in my tracks. Silence. No, there it was again.

Then I realized it was my chicken lunch settling. Seriously. That’s how quiet it was.

Eventually, after walking forty minutes or so, I came to a muddy estuary and the exit. And I was feeling happy that I’d made a detour on the way home to find this park. 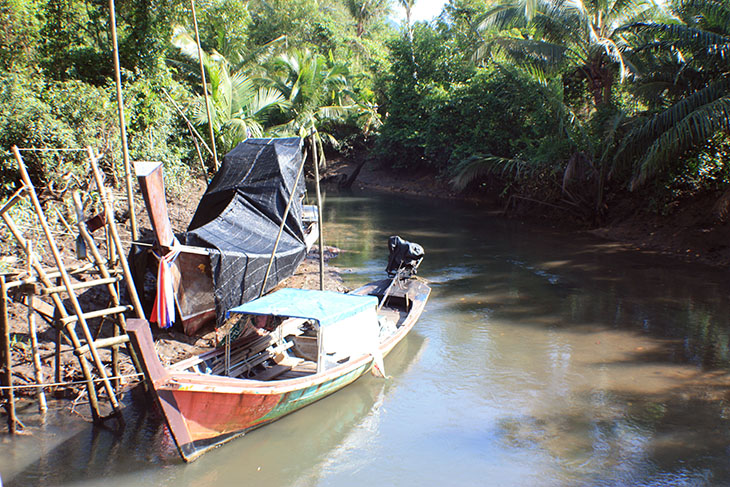 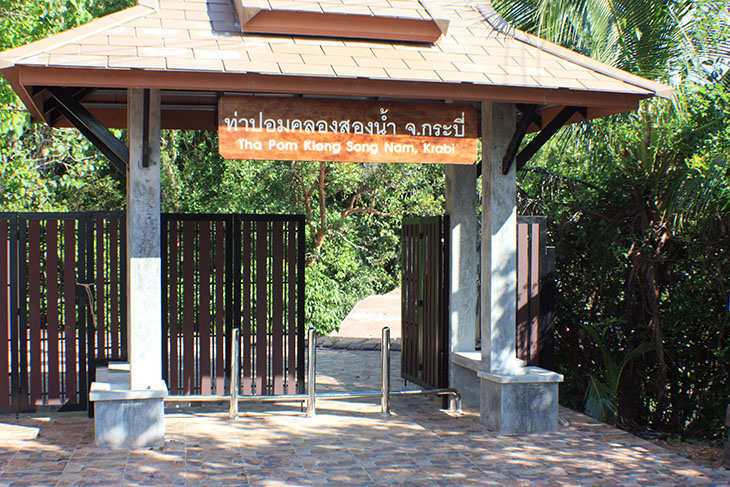 Except the sting was in the tail. The exit is nowhere near the entrance. Through the undergrowth you can vaguely make out some cars in the distance, which may or may not be the parking lot, and the road leading from the exit goes off in the wrong direction. Incidentally, the unmanned exit means if you don’t feel like paying, you can sneak in the back door! But you wouldn’t do that would you?

So what to do? Trek all the way back, or trust that the exit road will eventually meet the entrance road? Well, I chose the latter, and I’m not sure which was really better. It took about another forty minutes, which included a diversion through a rubber plantation, but eventually I arrived back where I started.

Looking back on the experience, I have to wonder if anyone has ever bothered to walk all the way through the park. That would be a shame if they haven’t. It was well worth doing.

So, from there, it was a few kilometers inland, and onto the highway heading for home. With a short diversion to the Amazon… 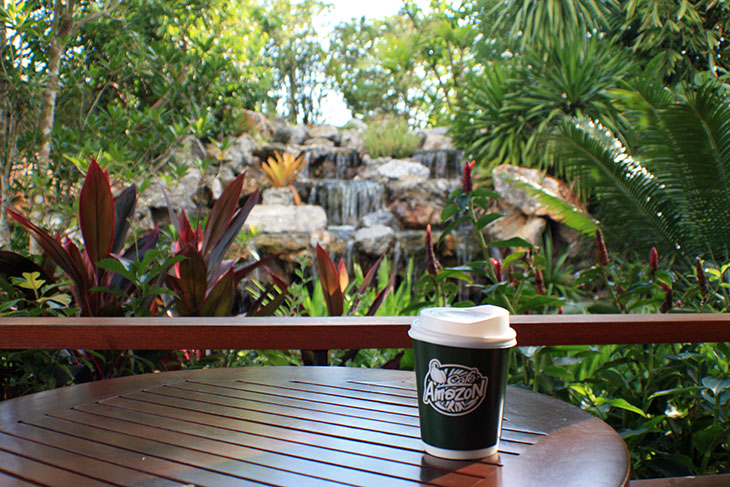 Amazon Café that is. Most PTT gas stations have them. They serve good coffee and have munchy things to go with it. So, after a caffeine refill and and some banana cream filled puffy things, I was again heading home. I hope you enjoyed the day trip as much as I did.

Oh, and if you’re a regular reader, you’ll be desperate to know if I arrived home by Beer O’Clock. I did. Just. What a hero 🙂