Yes, the drones have arrived. Not a bad service, fifteen days after placing the order. Well done to Banggood.

I’d been tracking the progress of the shipment, and was happy to see Arrived In Thailand, but not so happy when next day the status said Held By Customs. That can mean a variety of things, but this time meant absolutely nothing. Although, the package did look like it had been opened, so you might want to watch for a drone video of the inside of the customs shed at the Bangkok Post Office 🙂

For some reason, drone reviewers seem to think you want to watch their videos where they carefully open the package and unwrap the drones. Then you have to watch the assembly process. In my case, that would be beyond boring, as the latter took more than an hour. Zzzzz.

But I’ll show you a few photos; and the assembly of the Phantom CX-35 which might be of interest to anyone attempting the same thing.

But first, a jaw-dropping photo of … drum roll please … The Box … 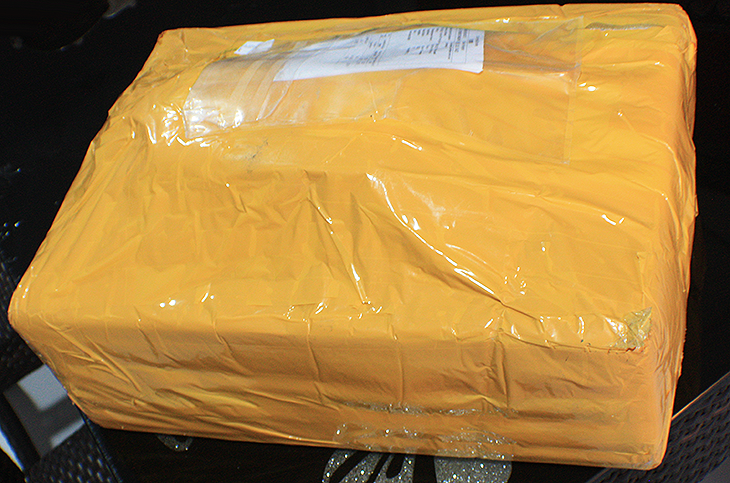 This is almost as exciting as Norwegian Slow TV.

And so, what do we have? Well, you can immediately see the difference in size between the Eachine E50 mini-drone, and the almost-enormous Cheerson Phantom CX-35 – and the latter is un-assembled… 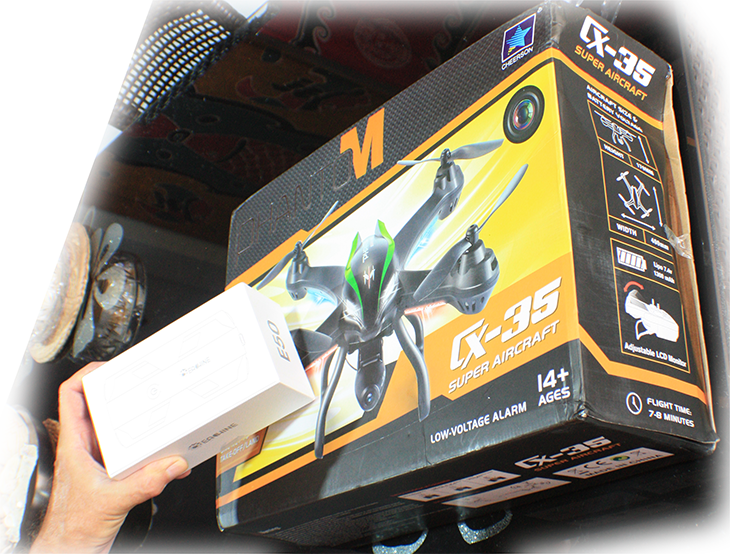 But, what’s in the boxes? First let’s look at the… 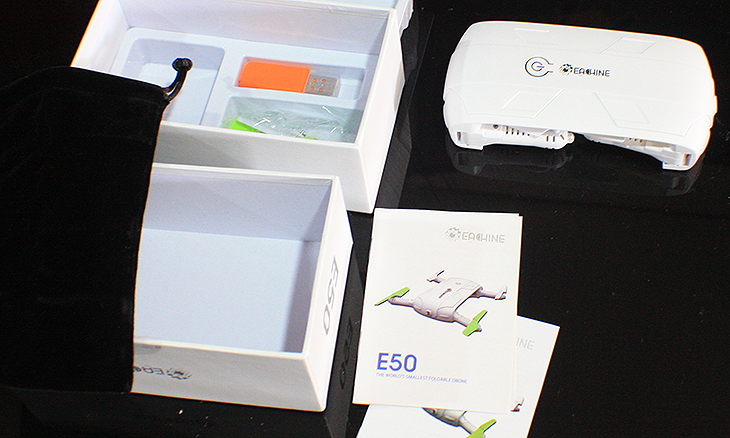 All pretty straightforward. The drone’s on the right, in its folded form, straight out of the box. Actually the first thing that hits you is that the box looks like an iPhone. Even the method of sealing is the same. I wonder how many kids will be disappointed at Christmas when they discover “it’s just a cheap old drone.” Never mind. They probably already have six different models of iPhones.

The black thing on the left is the sexy velvet carrying bag. To the right are the two almost unreadble (due to their size) instruction booklets – one in English, and one in – no, it’s not Thai – it’s in German. Perhaps the Chinese manufacturers think we speak German in Thailand. An easy mistake to make if you’ve ever been to Pattaya.

The orange thing is the USB charger for the battery and thoughtfully there are spare propellers. That’s it really. All you need to do is charge the battery, download the app to your device-of-choice and you’re good to go. 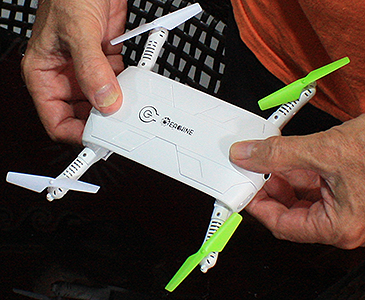 My battery came fully charged, so within minutes I was anxious to make sure the thing actually worked.

I wasn’t going to fly it. I just wanted to make sure I could do the WiFi pairing stuff, that the props could be folded out, that they turn, and that the LED lights flash.

I put it on the counter top in the kitchen and fired it up. Sure enough, it worked. What could go wrong?

You could take off and crash it into the corner of the fridge, dislodging one of the motors, that’s what.

Okay. I did do that. But it was quickly fixed. And I learned something. Well, some things…

Don’t fly indoors, at least not until you know how to fly. And…

Once the motors start buzzing and the thing is in the air, panic sets in. It’s a bit like the very first time you drove a car. You eased in the clutch, and after a couple of kangaroo moments you thought “Holy You-Know-What. It wasn’t supposed to move.” So, just like driving, drone flying is going to need lots of practice, not in the vicinity of domestic appliances.

Now, this was a whole different bouilloire de poisson. Look at this lot…

Nothing complicated, just super-fiddly due to the uber-small screws. Talking of which, there are three unlabelled bags of them. So when the instructions say use “4PCS PA1 7×7 screws” you have no idea which those are. Anyways; first job is to fit the legs… 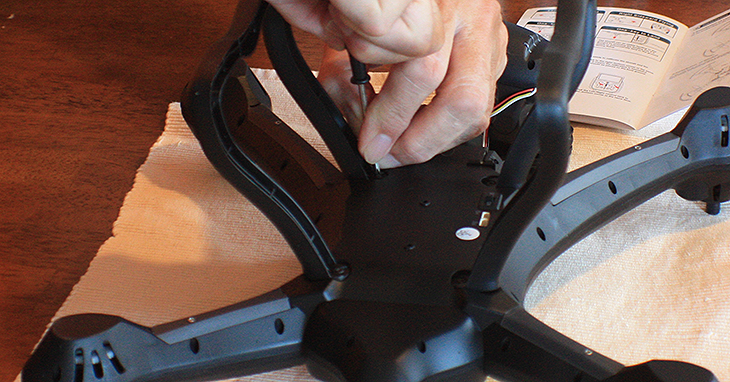 They snap into place, and are then held with four screws. Ah ha. The legs are black and there are four black screws. “I’ll use those” I thought. But, the props are also black, and when I realized the screws didn’t fit too well, I concluded the black screws are for the black props and some of the silver screws are for the black legs. But which silver screws? In the end I decided – if they fit, they are the correct screws.

I also discovered there’s far more screws than there are holes, so if – the first time I fly the thing – it falls apart, we’ll all know why.

Next, there’s the camera… 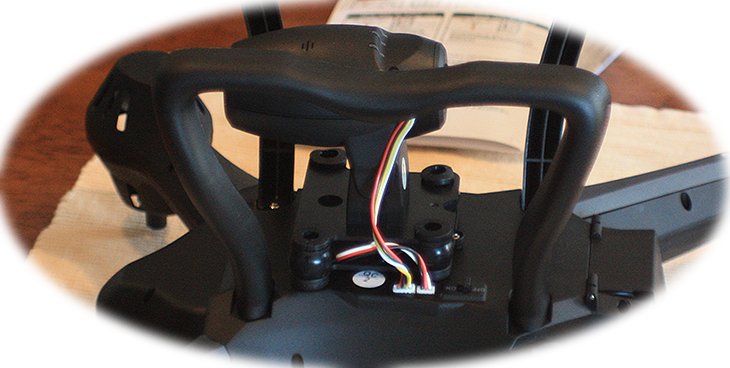 That’s super-fiddly. There are only two screws, but they go in places you can’t reach and are barely visible. Now you know why I couldn’t cover this in a ten minute video. And if I had, the audio would have been more bleeps than useful commentary.

You also have to pair those two connectors to make the camera work. They’re so small it’s impossible to see which way they go. And that’s where my 50/90 rule comes into play.

I like the camera though. The gimbal seems to have nice damping, and the camera is motorized and can be moved from the remote console … if I ever figure out which of the nineteen buttons I’m supposed to press. No, wait, I’ve just found two more on the sides. Make that 21 buttons. I’ll have to grow some extra fingers.

Last of all there’s the prop guards – easy fit, one screw to hold in place, and then the propellers themselves – match the hole in the bottom with the shape of the propeller shaft and put in one screw. A black one. I think. 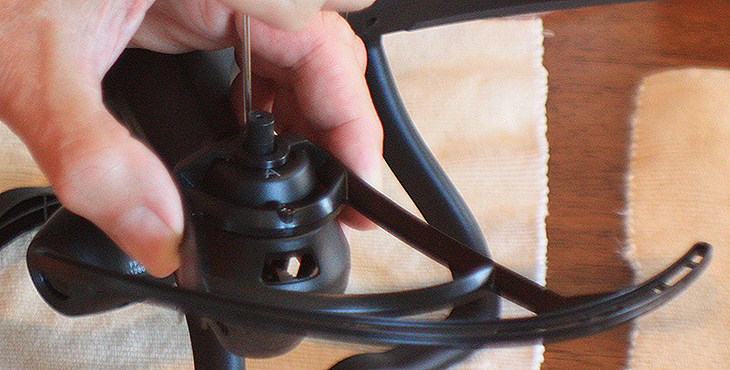 And there you have one scary looking Phanthom CX-35. 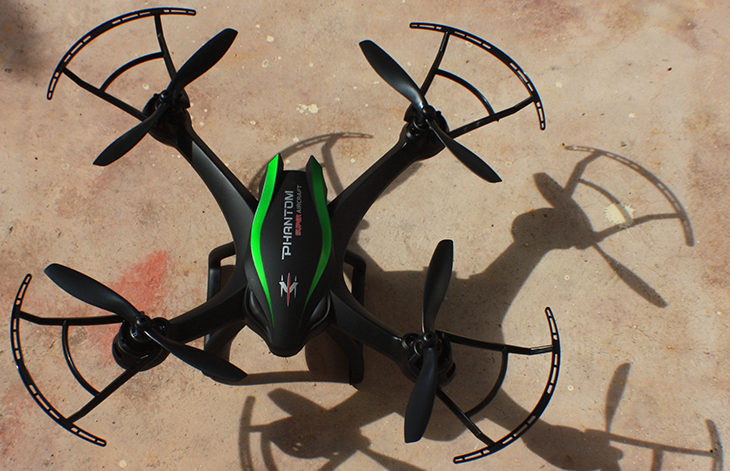 Well, not quite true. At this point, I hadn’t charged the battery. It comes with a charger, which is not USB. That’s a shame as it means I can’t charge the battery while travelling. I need to check if there’s a USB charger available, and I also need figure why I didn’t receive (or pay for) the spare batteries I thought I’d ordered. The battery has to be connected to the drone after charging and then popped into the hole in the back.

Okay, just one more thing. The camera has a slot for a mini-SD card so you can record & store photos and videos. I made a note to say “not included” but that was wrong. The drone comes with a USB mini-SD reader, and there’s a 2GB card plugged into that. You have to pull that out and insert it in the back of the camera…

Definitely not included though are the 4AA batteries for the remote controller. These snap in behind a small door in the bottom, but I can’t figure why you need the screw to hold the door in place. It snaps on pretty tightly… 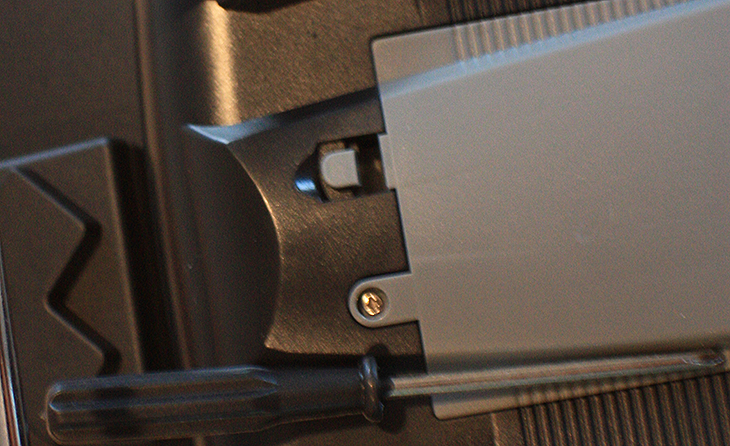 So, just for completeness, here’s the 21-buttoned controller all powered up… 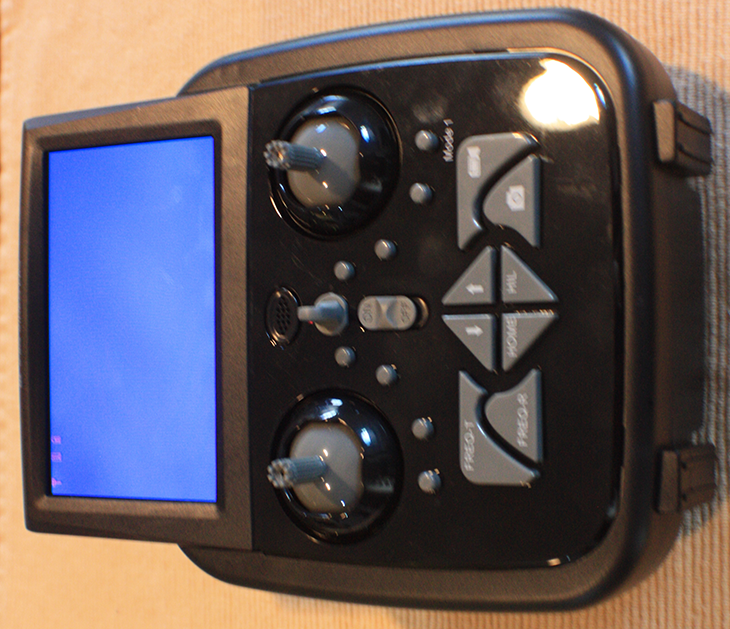 Now I just need to find a piece of soft grassy land (easy task) and a time with no sea breeze (not so easy.) Maybe early morning. Stay tuned for tales of crashes, but hopefully no serious damage. And maybe some video too.