…And Other Nakhon Si Tootlings.

Yesterday I went down to Nakhon, or NST for short. Regular readers will know I don’t relish the trip. It’s 100kms away from Khanom, and about a three-hour round-trip, so I really need a good reason to go. I figured I had one.

Well, even if you do, I bet you don’t know which day they have the procession. I didn’t. And the article I read didn’t know either. It’s somewhere between September 25th and October 4th. Right! So I’ll go every day in the hope of catching a procession. Not.

I faced this conundrum a few weeks ago when the town of Trang had a Roast Pig Festival. I planned to go, but about all I could find out is that it’s usually during September. A bit too vague. It’s also held near the Rama V Statue – which, after an hour of hunting through websites and Google Maps I had to conclude doesn’t really exist. Eventually I found a date, and that coincided with Thailand’s big referendum, which didn’t seem like a good day to be out and about, given that Trang is at least a five hour round-trip.

Anyways, would anyone in their right mind drive for five hours just to eat roast pork? Of course not. But I would. 🙂 As it turns out, the festival was held two weeks later than advertised. Oh well, there’s always next year.

With all the uncertainty and mystery surrounding Thailand’s festivals, you can understand why I wanted more info before attempting to watch a procession. I found details of the NST office of the Tourism Authority of Thailand (TAT) and knowing I was wasting my time, I sent them an e-mail. They didn’t disappoint me.

I’m sure you can see where this is heading. I had to go visit them to get more details. Which is why I trekked down to NST yesterday morning.

The office is in a part of the city I haven’t visited in a while, and in an area with very narrow roads. I knew parking would be difficult, but I managed to find a space fairly close by, and right next to a section of the city’s ancient wall… 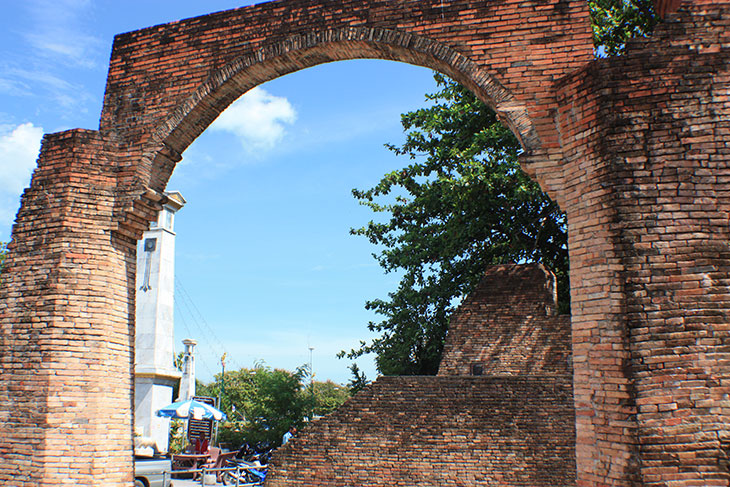 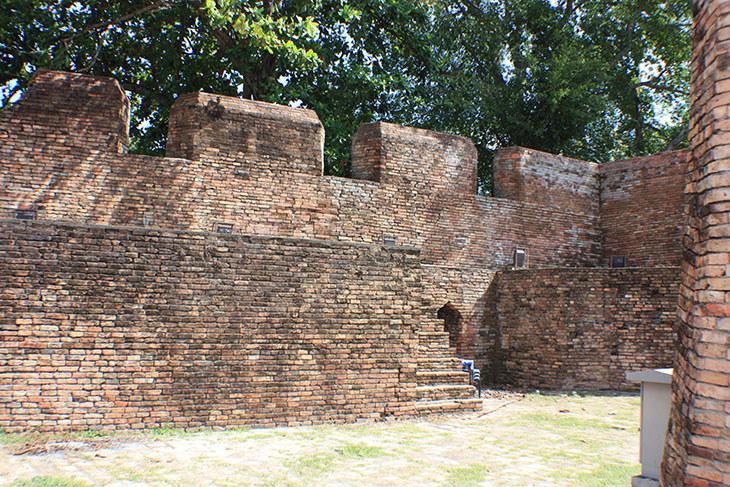 I’d like to tell you how old the wall is, but the TAT website helpfully says “city wall was built in the unknown period long time ago.” Well, at least you now know it was a long time ago. Maybe even before I was born!

Next, before I reached the TAT office, I found myself at the city shrine… 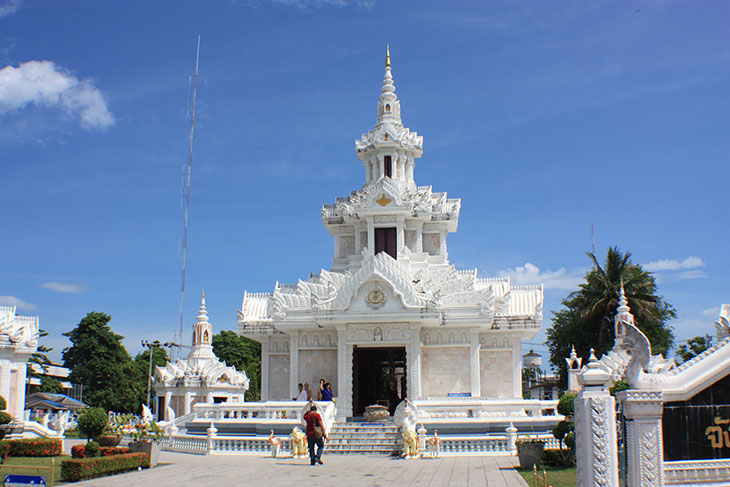 I’m a bit unclear on the concept of city shrines. I think you donate some money, say a few prayers, and that somehow helps the city to be a better place.

Okay – make that very unclear. But it’s photogenic, especially with the bright sunshine… 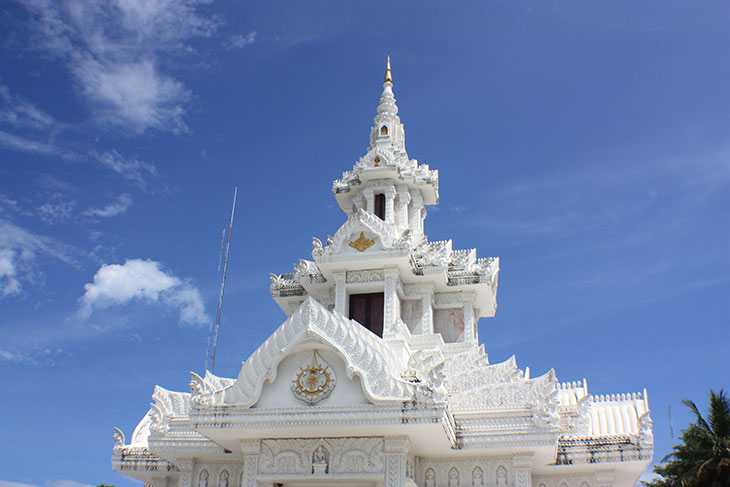 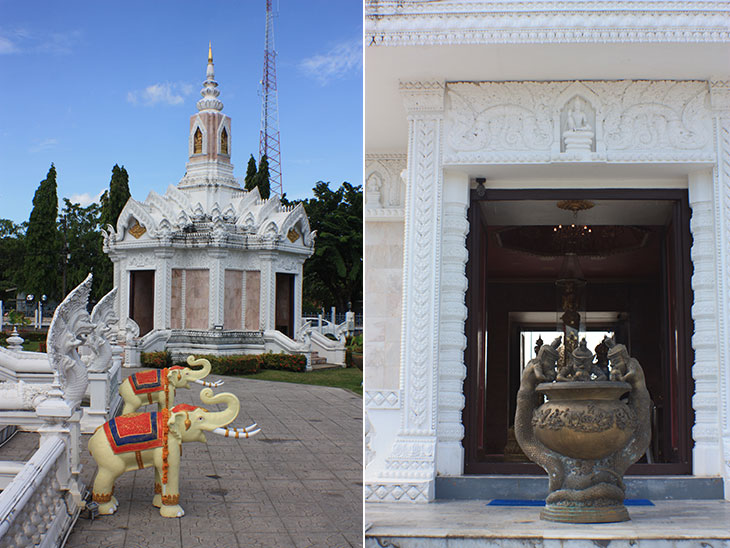 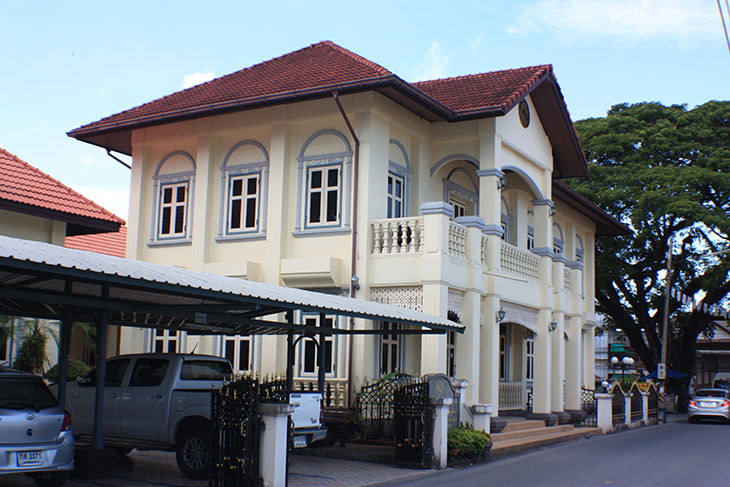 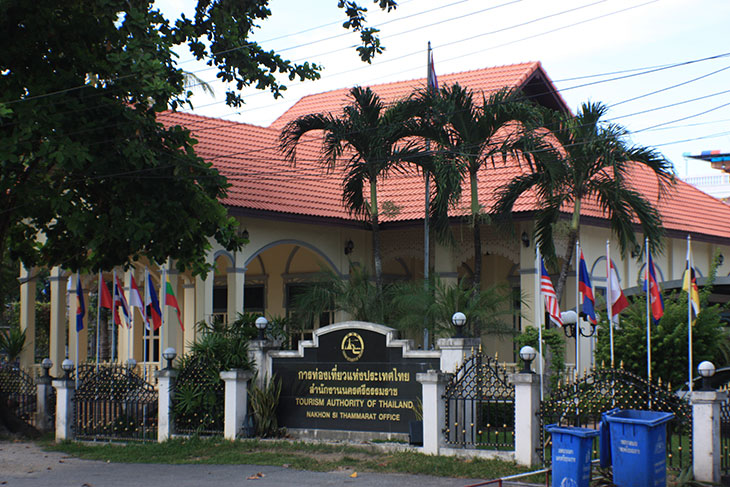 …but not as attractive as the young lady who helpfully answered all my questions, and provided me with supporting paperwork – even a poster to remind me of the date. I must have flipped my Mood Switch from its normal Grumpy Mode into Charm Mode.

I probably shouldn’t say “colonial-era” with respect to Thailand, since it was never colonised. But if the building was in Malaysia or Singapore, it would have been built by the Brits somewhere around sixty to eighty years ago.

Anyways; I now know the big procession is between 7am and 10am on September 30th., and starts at the park right next to the TAT office. If I can drag myself out of bed at 5am I’ll be there. Stay tuned for that. The procession part, not the dragging out of bed.

And I think afterwards I might have to go ask the nice lady some more questions 🙂 Knowing my luck she will have been replaced with someone who looks like the rear-end of an elephant, and whose Mood Switch has been permanently hard-wired into Grumpy Mode!

Well, I’d planned a whole day of tootling. Roughly; the morning in NST, and the afternoon down in Pak Phanang. More of the latter later.

I wandered over to the small street on the opposite side of the TAT office from the shrine. Thanon Tha Chang is supposed to be the best area for souvenirs. The stores sell a lot of metalware and woven materials, and are said to have my favorite Nielloware. I mentioned this a while ago in an article about the National Museum.

But everything looked a bit cheap and touristy, and the shopkeepers decidedly unfriendly. I didn’t feel like arguing that some bit of anodized tin plate really wasn’t neilloware, so instead I took photos of the rather odd-looking buildings, and kept walking… 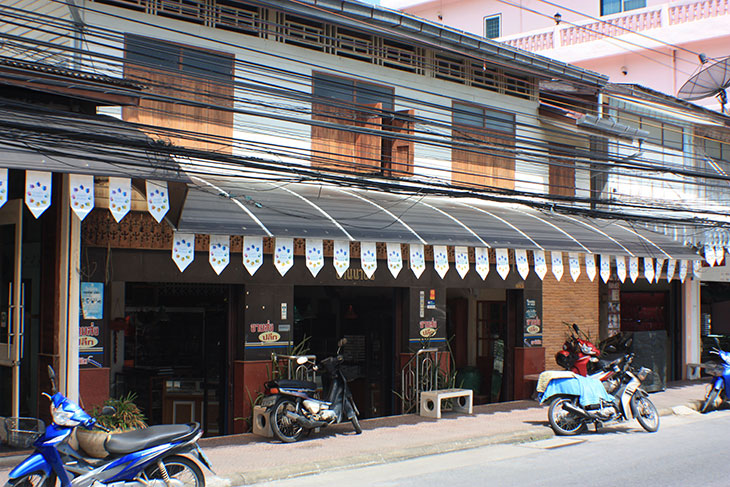 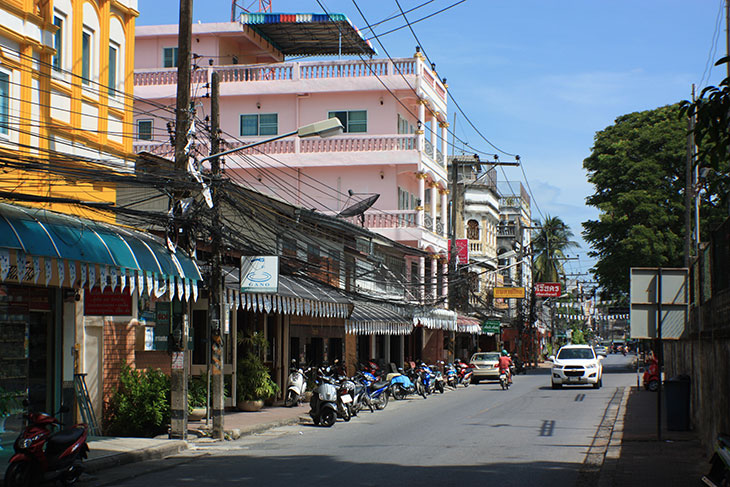 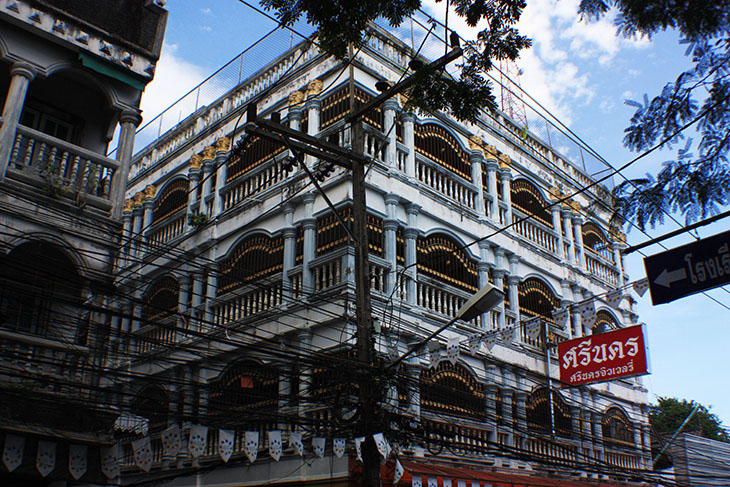 I’m not sure what this guy’s problem is, but whatever he’s saying, I have a feeling the second word is “off” … 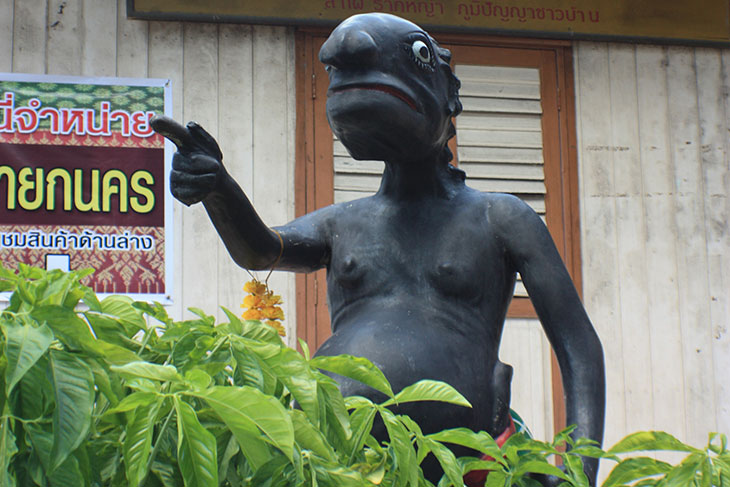 Wandering some more, I noticed in the distance, a chedi (or stupa, if you prefer) with a pronounced list.

Anyhoo, this needed Bert’s help, so there was more negotiating of small streets followed by hunt-the-parking-space. Eventually I was right in front of something I recognized as Chedi Yak. Two years ago it hadn’t been painted. It looks much nicer now, but would look even better in gold. Perhaps if more money is left at the city shrine…

Mystery also surrounds the age of this. There seems to be agreement that it is Sri Lankan in style, but some websites say it was built in 1006CE, whereas an onsite plaque says “around 1257 – 1358.” Either way, this is certainly older than me… 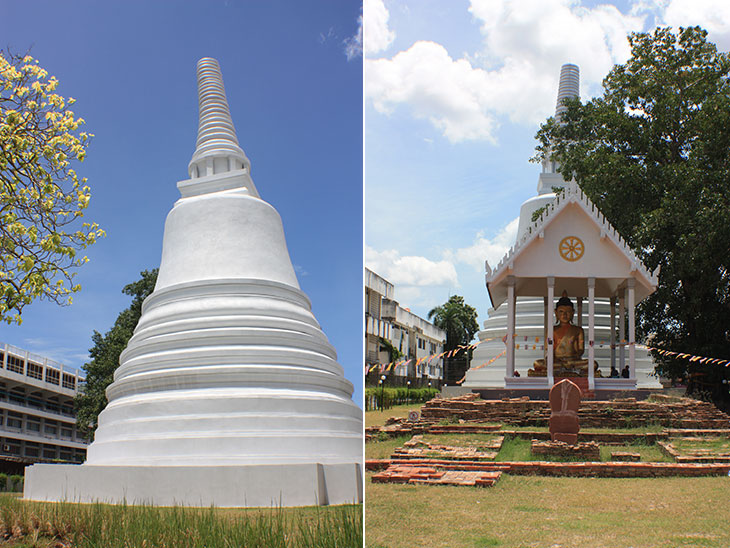 And so here endeth the morning in Nakhon. It was time for lunch and a trip south, which I’ll come to in the next article – due soon.