…But Still In Khanom.

Well, I’ve waited just over a week for another sunny morning. Last week, you may remember, I went to the south of Khanom, so today I thought I’d better tootle up north. Not far, just like last week, only a few kilometers.

I almost didn’t go. At 7am it was quite sunny. By 8am it was overcast. But then the sun did it’s thing and burned off the cloud, so by 9am it was pretty spectacular.

At times during the past week it’s been seriously wet and wild. Strong winds, thunder and lightning (not necessarily in that order) and torrential rain. Yesterday afternoon the rains started again, so I rushed outside to retrieve some cushions that I didn’t want to float away. Even though my small garden area is partly covered with a metal roof, the rain comes in sideways.

And just as I rushed out the back door, Zeus and Thor looked down and thought “that metal roof looks like it would conduct electricity rather nicely” and decided to put it to the test.

Sorry, they should be in one of those cartoon bubble thingies, but I’m all out, and they’re back ordered.

Anyhoo, looking back on the experience, I think if you have to be outside in an electrical storm, probably the safest place would be under a metal roof. The fact I survived would support this theory. And today my blood pressure is almost back to normal.

So, here’s my metal roof just after I arrived home this morning, and couple of hours later, as the next storm was moving in. The picture on the right was taken from indoors 🙂 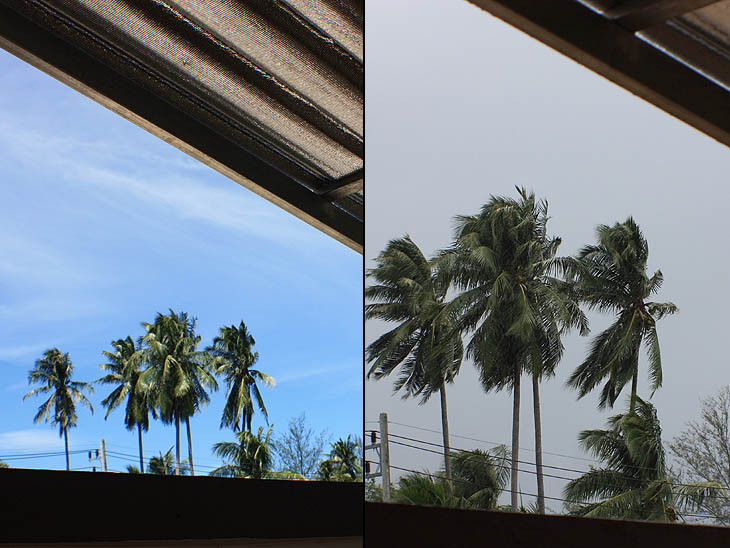 Where was I? Oh yes, so this morning I decided to get the wat out of the way first. I figure Wat Suwan Banphot must be the main temple in Khanom. It’s certainly on the main street, and not easily missed. I’ve driven past dozens of times, but never actually stopped.

The buildings are spectacular, especially in the morning sunlight, which is why I wanted to go today. The red and cream colors go nicely with the blue roof. What do you mean “That’s green”? It can’t be. I don’t like green. 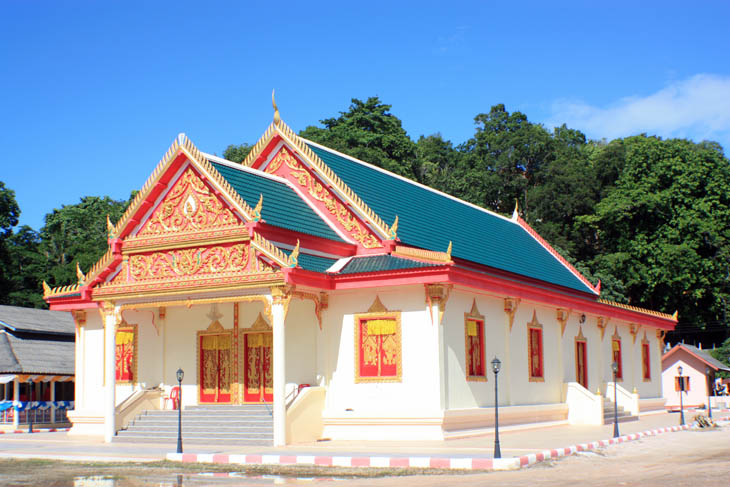 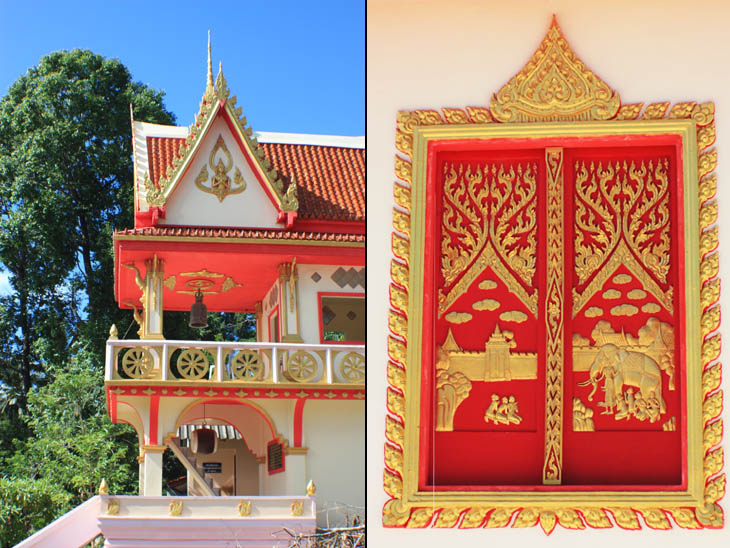 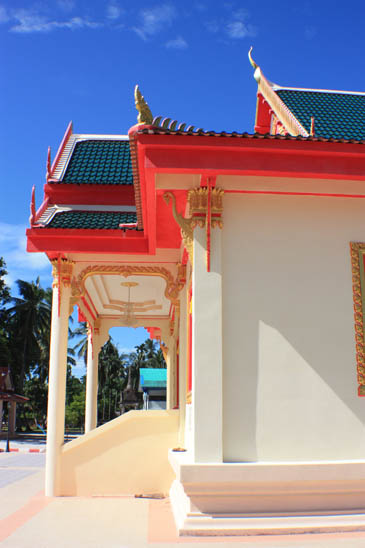 The place covers a large area, which seems to be being landscaped. It’s usually a nice grassy area, but today it was a sea of mud.

So then I wandered around the back and thought “noooo” not steps. I didn’t know they were there.

Climbing steps at 9am is not my idea of fun, but I’ve now been to enough similar places to know there’s usually a small road leading around the side to the top of the hill. It may be twice as far, but a gentle incline is a lot nicer than a steep climb. 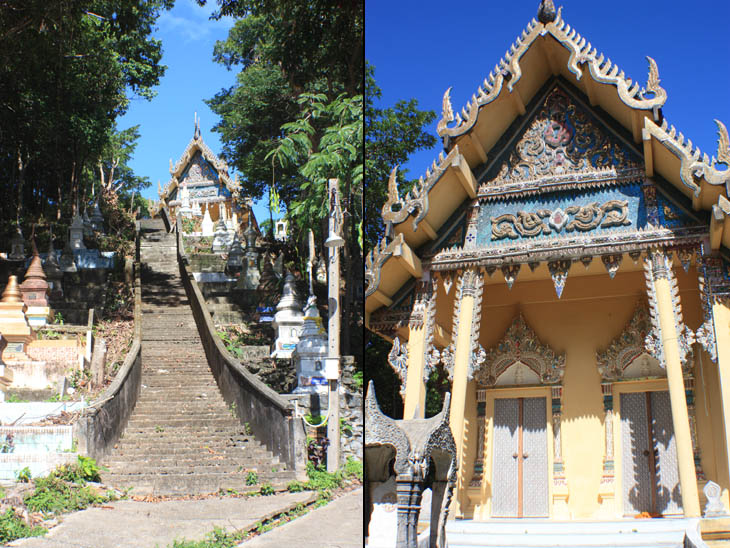 Anyhoo, the top wat looked a bit derelict. I don’t think anyone’s been up there in years. There should have been a nice sea view, but it’s all too overgrown. 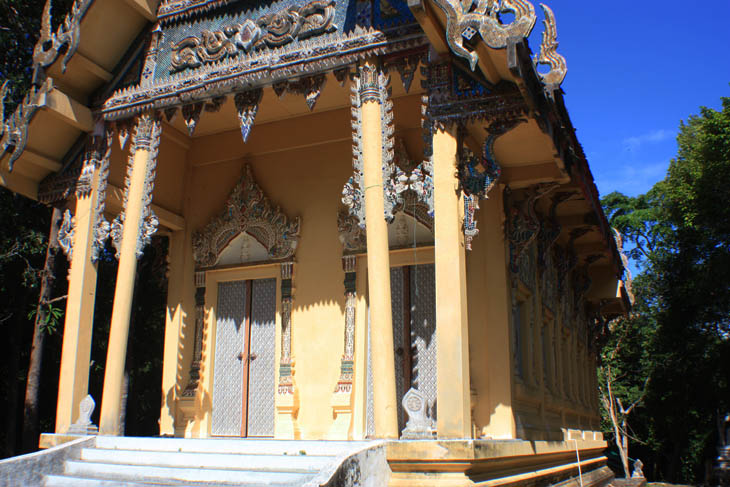 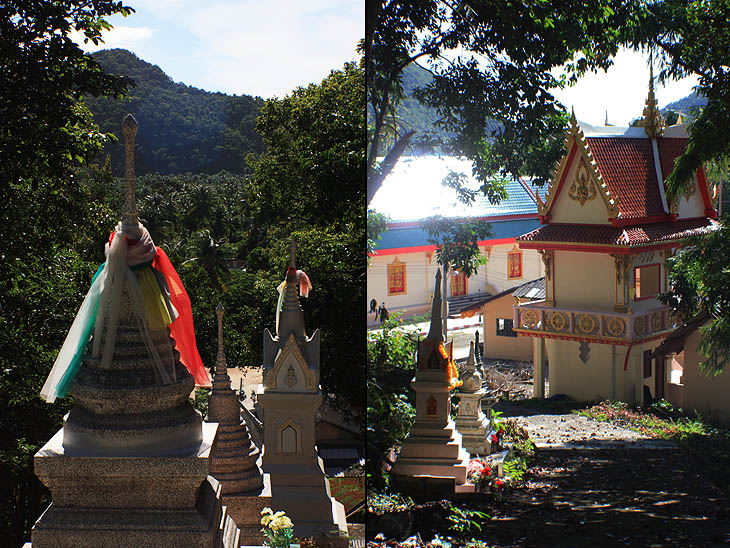 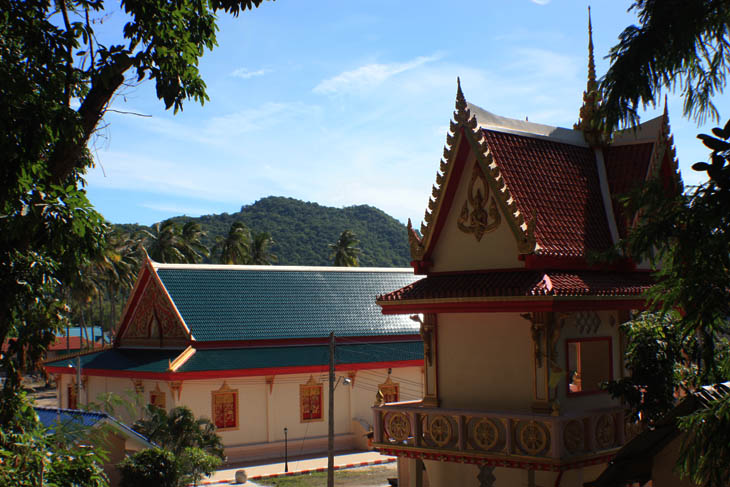 So then I went just a couple of hundred meters along the road to the river. It’s easy to take pictures from the bridge, so I decided to poke my nose – well, Bert’s nose – down all the tiny side streets, and then poke my nose – yes, mine – into some of the riverside factories… 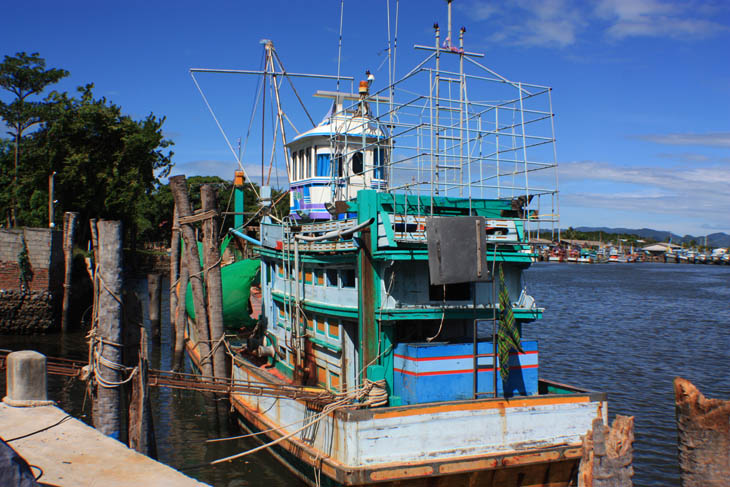 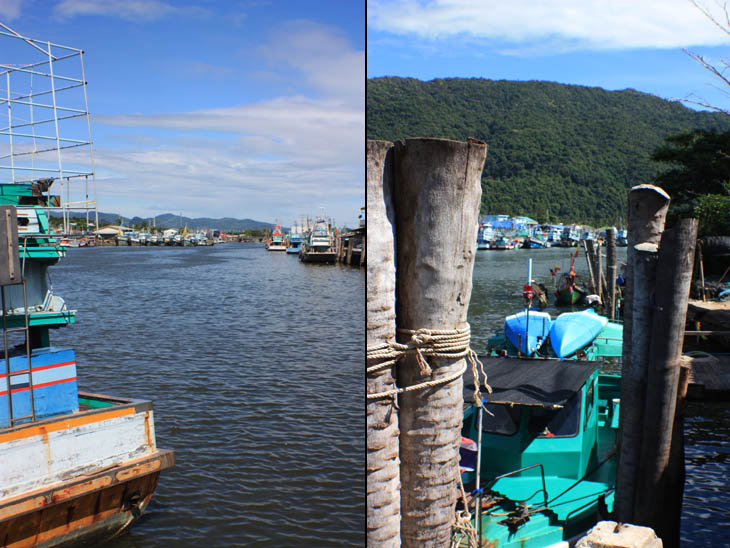 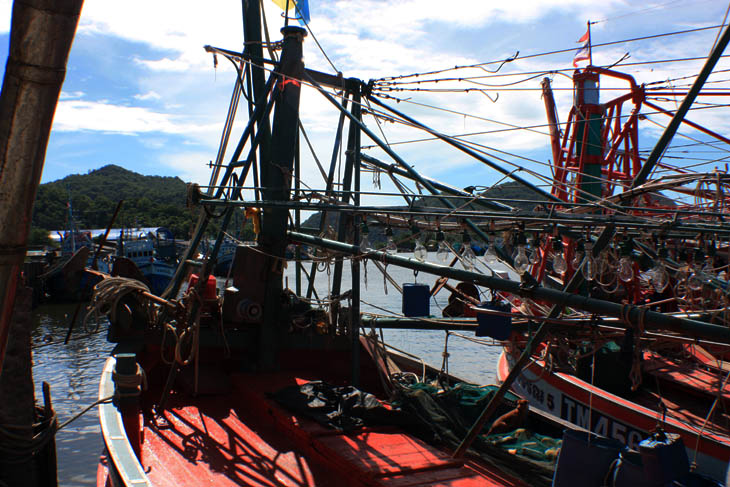 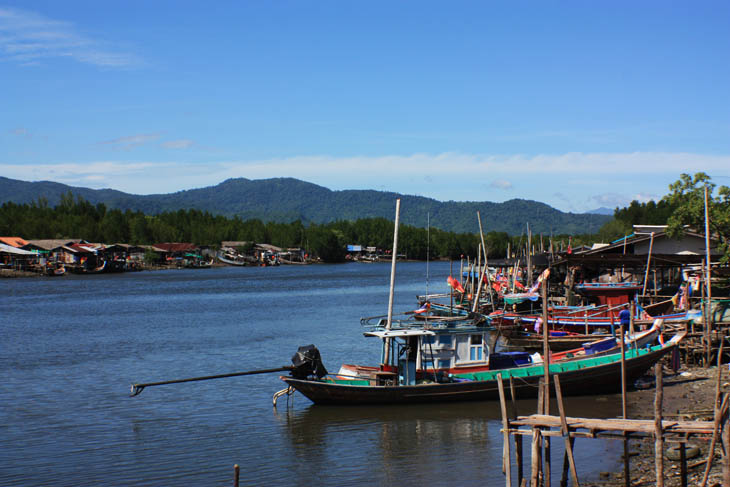 And to round-off the morning, I wanted to find the small bay that’s just north of the river. Khanom’s ten kilometers of beaches are well-known but this little bay is somewhat secluded. That’s partly because the road leads to the entrance of a large electricity generating station. Now, who’d’a’thought you could drive straight through the security gate, follow the many “To The Beach” signs, and a couple of kilometers later, emerge here… 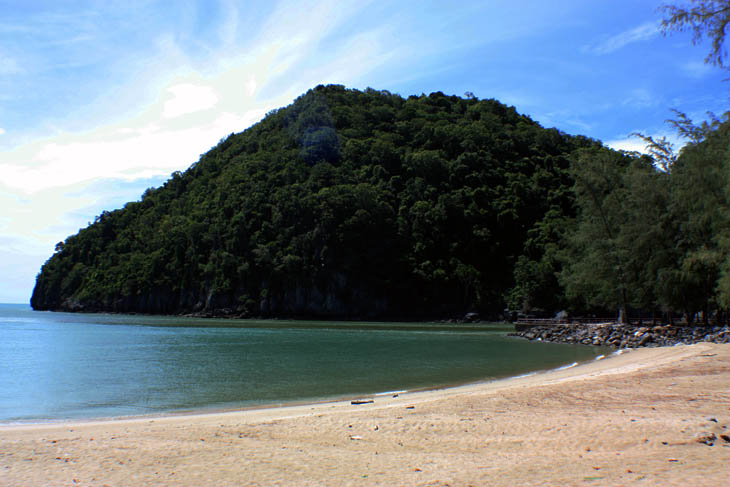 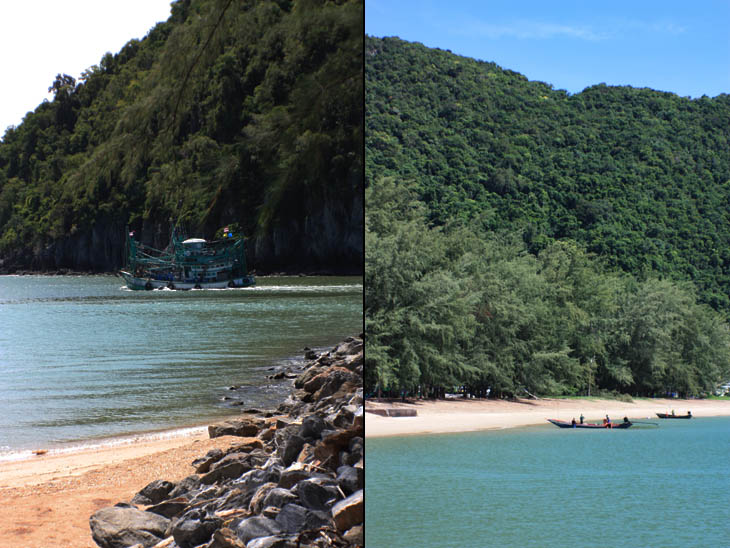 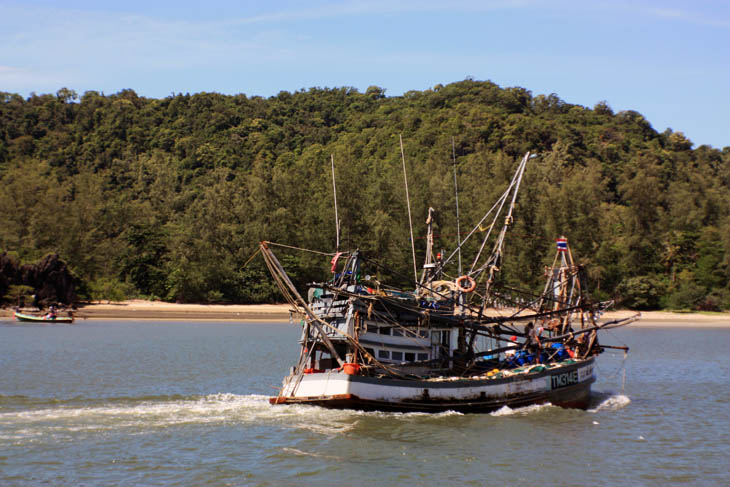 Okay, the power station is pretty well secured with a large fence, and anyways, what was I going to steal? Electricity? But it still seemed odd. 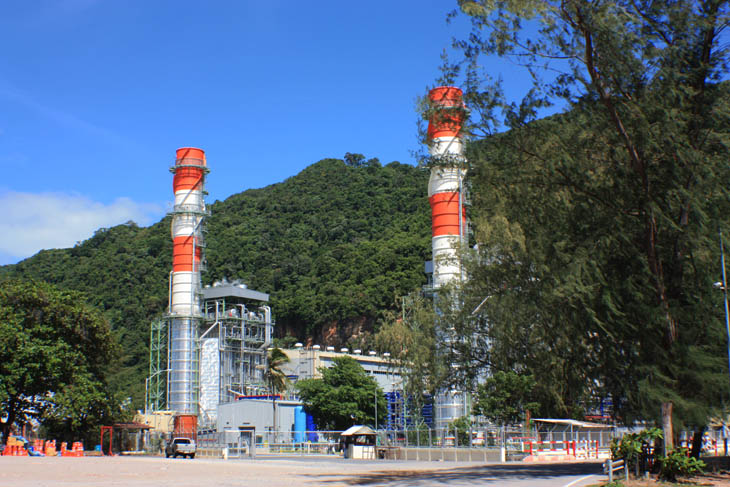 On the way out, the guards did show a moment of interest, and gave that – oh, a farang – look, but otherwise ignored me.

The Thais do love to play “Spot The Farang.”

Maybe I should write an app. I could call it Farángemon Go. They could capture farangs on their mobile phones. Or maybe someone’s already thought of that 🙂