A few years ago, before I had given any thought to moving from Malaysia to Thailand, I was scanning through AirAsia’s schedule, wondering where in the world a place called Surat Thani might be. Well, I knew it was in Thailand, because AirAsia said it was.

When I looked at Google Maps, I could see it was sort of mid-South, on the east side of the Isthmus, quite close to the central mountain range. And dominating this part of the map was a large body of water. “Must go there one day” I thought. And for a variety of reasons, that “one day” didn’t happen until yesterday. And then it almost didn’t happen, but did. Are you following this? 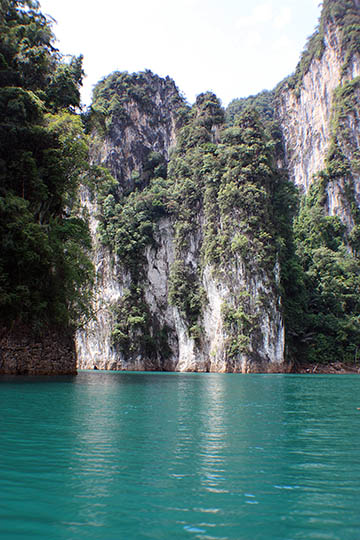 Well, let me explain. The water is the Ratchaprapa Reservoir, and unlike most places I uncover, is quite popular with tourists. The only way to visit the area is to drive to the Dam, and jump in a boat. There’s really no other roads. When doing a little online research, I quickly learned that it’s not uncommon for tourists, especially the farang types to get ripped off. The boatmen, who seem to be in a limited supply, have a captive audience so to speak, and figure they can change anything they want. So, having read this, I quickly decided I needed to go there with someone who can speak and negotiate in Thai.

Then, for one reason or another that didn’t happen, so I decided – weather permitting – yesterday was the day I was going to make a visit. Well, more of a recce really. I planned to look around the dam area, take some photos, but probably not try to negotiate a trip on the water. And then the day before yesterday a friend called, said she had some visitors, and that we should all get together. Okay, I thought, spending a day with female people is probably better than going to the dam on my own, and I mentally postponed the trip.

Early yesterday morning was very cloudy, so I figured I probably wouldn’t have gone anyways. But by the time I’d picked-up friend and friends of friend (hereinafter referred to, subject to clause 9 subsection B paragraph 3, by the collective noun “friends”) the skies were completely clear. I think I should have been a lawyer. Anyhoo…

Visiting Khanom seemed to be Plan A, but suddenly I said “How about the dam?” Given that I was the one holding the steering wheel that was mutually agreed, and so this is how I managed to make my first visit. 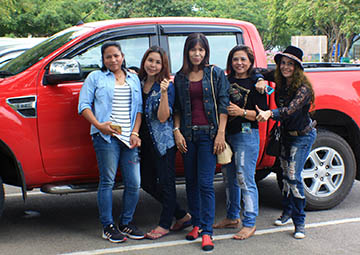 The dam is a little less than two hours from Sichon. The four people squished into the back of Bert did a lot of squealing and squeaking, but I think that’s the noise they usually make, so I figured they were surviving the trip just fine. They didn’t appear to be damaged when they all rolled out at the dam! If you happen to notice the jeans worn by the ladies on the right, well, I think they came pre-damaged.

As it turned out, I was right about needing Thai negotiating skills as it took a good twenty minutes to negotiate a trip plus lunch. If I feel anyone is trying to rip me off I just walk away, so I know I wouldn’t have lasted twenty seconds.

Unfortunately by this point, the nice sunny morning had been replaced with some serious overcastness (hmm, don’t use that in Scrabble) and rain looked likely, or probable, or even imminent. Undeterred, we set off on a journey of unknown length – because no one would tell me. The deal was that friends would pay for the boat, and I would buy lunch; so I guess my question sounded a little like “Just how much boating have you paid for?” Not too polite.

Anyhoo, the answer was “A lot.”

The lake is so vast that I expect we covered only a tiny fraction, but in ninety minutes we’d seen a good deal. Trust me, it’s far from boring. The scenery changed constantly, as did the weather. We were kind of lucky that the rain seemed to go around us, but the foreboding clouds did add to the mystery of the place. A little sunshine would have been nice. Next time.

Lunch was at a small floating restaurant in the middle of nowhere, and it had small chalets where you could float your way through a night or three. Nice, but I think lunch was enough. 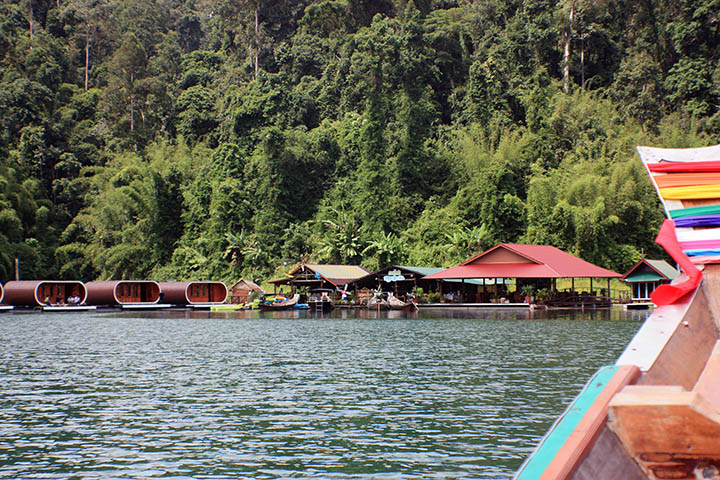 I was surprised though to see people swimming. The lake looked deep and very cold, but when I stuck my hand over the side of the boat, I initially thought it hadn’t reached the water. But that’s because the water temperature must have been the same as body temperature and I couldn’t feel anything. Bizarre, but probably nice for swimming. And since I hadn’t realized my hand was in the water, I’m glad my watch survived the dunking.

After lunch, it was an hour or so back to the jetty, through some rather choppy water, after which bodies were squished back into Bert, and we headed for home.

A really good trip. The scenery is spectacular. If you’re in the area, it’s not to be missed. But make sure you have a good negotiator. I’ll leave you with photos (probably far too many, but these have been culled from a total of 212)…