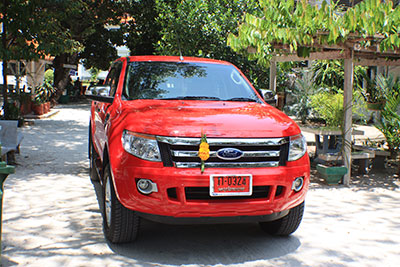 Yes, this is Bert. I’ve been writing about him for a while, wondering how much longer it would take to pull together all the paperwork needed to get him registered, but finally he has arrived.

Yesterday, a lot of things happened in a flurry to enable Bert to be delivered today on temporary license plates. That’s those red things. Hey, I’m not complaining, they match the truck. Eventually, after yet more paperwork, I will get my own white plates … A few weeks? A few months? No one seems quite sure.

Some people tell me I can’t leave the Province with these plates. Some people say I can’t drive at night. And yet, I see a lot of people who can’t be bothered to pay for the temporary red plates and drive with none at all. So, I’m hoping it’s no big deal and I can drive wherever I want, whenever I want.

Why is he named Bert? Well, it’s an easy way to pronounce BRT. As in Big Red Truck. I suppose he could have been Bart, but Bert sounds better.

Aside from which, there is a family connection. My maternal grandfather was named Bert. Actually Herbert, but everyone called him Bert. He was a painter and decorator by trade, so I’m sure Bert v.1.0 would have found Bert v2.0 very useful. I actually can’t remember how he moved his stuff around, I mean paints, ladders, etc. I don’t think he had a van. Maybe a motorcycle and sidecar of some kind. I’m talking about sixty-plus years ago, so I’d have to rattle too many brain cells to recall that.

Yesterday was a bit crazy. The initial plan was to go to the local bank, withdraw cash, and drive 80kms down to Nakhon to settle the final bill. As you can imagine, that would have been a lot of cash! I had visions of getting into an accident and the 1000 Baht bills flying out the window. I’m told it’s all quite normal and that everyone pays cash for everything!

When people say “don’t worry about it” – I worry about it. So, after many phone calls and text messages, the Ford dealership agreed I could do a bank transfer, which of course would have been the logical starting point. 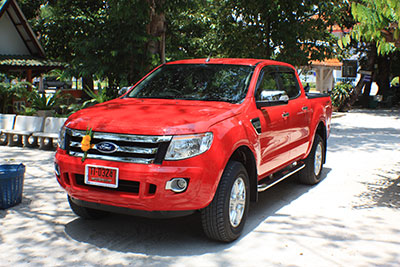 I have to give credit though to Bangkok Bank for helping solve this problem. I’m sure most banks would have said “mai dai ka” and washed their hands of it. But many people were involved. Many phone calls were made. Much tapping on keyboards was done. Eventually it was agreed they would do not one, but eight transfers, in order to reach the needed amount.

This took an hour and a half! After which I had to sign sixteen pieces of paper. I felt like I was signing my company’s annual accounts. But as you can see, it worked. And because I didn’t need to go and pay, the dealership kindly delivered the truck to me – at my friends’ hotel, the Ekman Garden Resort, where lots of people came to admire it, and lots of photos were taken.

Now, although the dealership made a sale, it was made very clear to me they weren’t happy. Why? It seems – and please don’t ask me to explain the logic in this – but if you don’t finance the vehicle, the dealership makes little or no commission. It seems the finance company pays a large commission on the loan.

So of course, when I was placing the order, I said “Okay, I’ll take a loan.” It’s 0% interest. Why wouldn’t I? I could have left my money overseas. But of course, nasty farangs, even if they are fully legal in Thailand, can’t have loans. Which made the whole conversation pretty pointless. If it was done to make me feel bad – they failed. Not my rules. 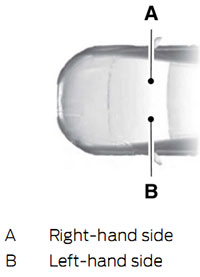 Of course, Bert didn’t come with an Owners Manual in English. That might take another month … probably more. By which time, if I haven’t figured what everything does, then I’m more senile than I realized. But these days everything is online, so I found a PDF file, and have already read it from cover to cover.

Anyhoo, I was very grateful for this diagram on the right, which has definitely saved me losing face by getting in the wrong side!

Are they serious? Do people really need this level of help?

The first job, once the dealership guy had left, was to keep my Thai friends happy by having Bert blessed by a monk at the local wat. It was agreed it would be no problem to take photographs, so I thought, well, it’s something to blog about. 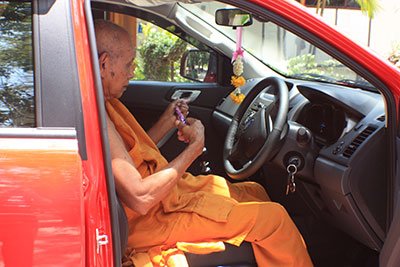 It took about twenty minutes in all. After brief introductions, a multicolored cord was blessed, and eventually this was tied around the steering column. Lots of marks were made on the headlining, and water sprinkled just about everywhere, including on the new owner! And after some kneeling and praying Bert became Blessed Bert, and I think I became a blessed nuisance. But everyone’s happy.

And then of course the only thing I wanted to do was to drive Bert home. But I can’t drive two cars, so Bert is still at the hotel. Tomorrow the Honda Shitty finally will go back to Surat Thani for good, and when I get back, I can get my hands on Bert.

I’m hoping we’ll be good friends. I have a lot of touring planned. Some more local trips, but also some multi-day ones. I’m hoping too Bert will get along with Ms. Chuckles, my GPS lady. While I’m snuggled up in a hotel somewhere, they’ll need to be nice to each other out in the parking lot. If Ms. Chuckle’s software is compatible with Bert’s hardware, I suspect they’ll have a whale of a time. 🙂

Anyways, that the story of Bert’s First Day.