Ranong is a long thin province on the eastern coast of southern Thailand. It’s about 170kms from north to south, and, not surprisingly, it’s about the same from south to north. The southern end I’ve visited a few times, especially around the area of Khao Lak. You will find a number of articles here in Twitterings, especially the similarly named “The Khao Lak Loop.” This new loop though was to the north, which contains the province’s capital, also named Ranong. I guess they didn’t want to confuse people by calling it Bloxwich or Milton Keynes.

I’d had the trip planned for some time, but you know, this virus-thingy got in the way. Then, when most of the travel restrictions were lifted, the weather got in the way. Week after week of dark, gloomy skies, and frequent rain. I think the government has a secret switch marked “Stinking Hot” and “Stupidly Wet” and they flip it twice a year. When the weather goes from one to the other, it stays in its new mode for months. In good weeks, when we all wore our masks and washed our hands twenty times a day, we were allowed one half day of sun, but clearly a few people broke the rules and most weeks the gloom prevailed.

One day last week the government flipped the switch back, stinking hot returned, and I thought “I’m going to Ranong.” People who’ve been there might wonder why. Now that I’ve been there, I’m wondering why. It has its attractions, but not as many as I was expecting, although continued virus restrictions are partly to blame.

And what’s this about a loop?

Well, I had a choice of routes. Going to the bottom of the province and working my way up didn’t make much sense. I’d be heading off in the wrong direction and then visiting places I had no particular desire to revisit. Finding a way to get alongside the north end of the province and then heading west over the mountains seemed best. That involved about three hours heading towards Bangkok on a very busy highway. But needs must.

Courtesy of Google Maps, here’s a rough idea of what the loop looks like… 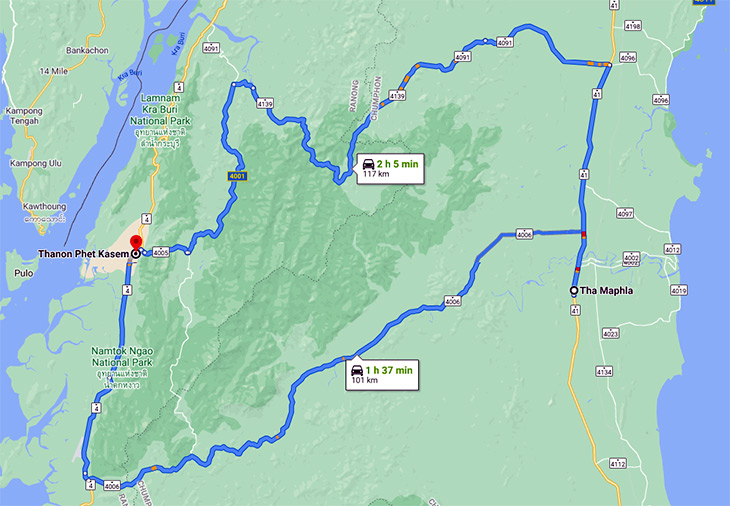 But I’m getting ahead of myself. Before heading into the mountains, I broke the journey at a place called Suan Nai Dam, or The Garden of Uncle Black.

Uncle, it would seem, has an insatiable desire to teach the world about toilets. There are piles of concrete poo, which I declined to photograph, and everywhere you look there are giant toilets, like these… 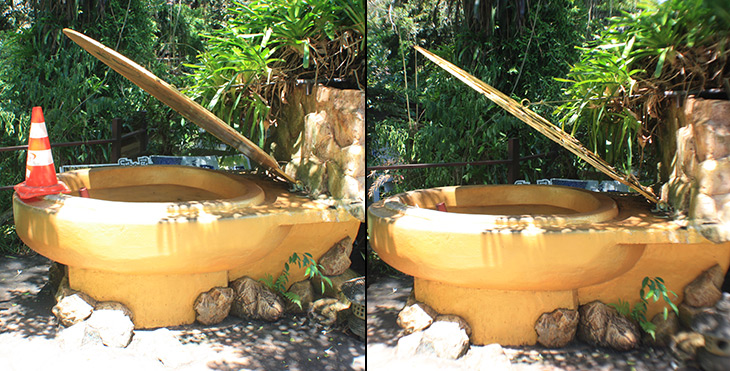 Yes, that’s two photos of the same potty. A thoughtful employee, seeing me taking photos, rushed over to remove the cone. I’m not sure which I prefer. Maybe my mental image of a giant cone-eating potty is better. Then there were the washrooms in the trees… 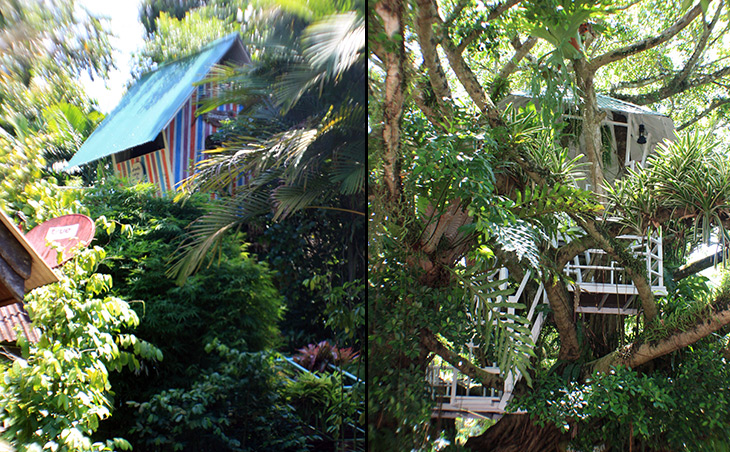 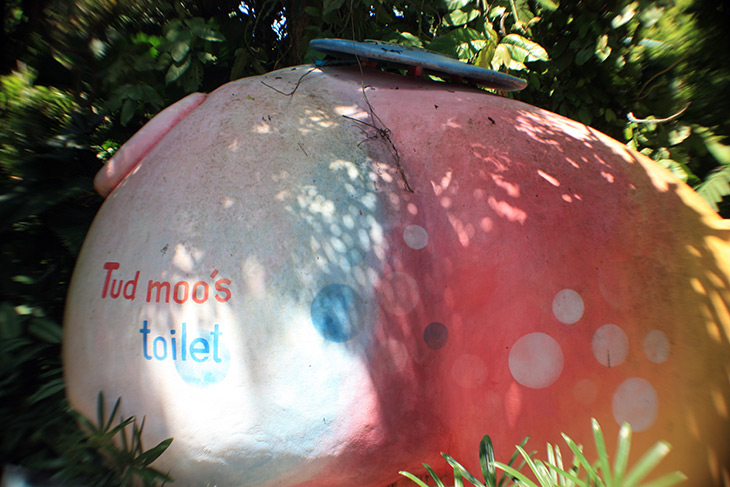 The english translation of the explanation for this made absolutely no sense, so I won’t repeat it. Feeling suitably flushed, I headed back to the highway.

As you can see from the map, the road across the mountains was the fun part… 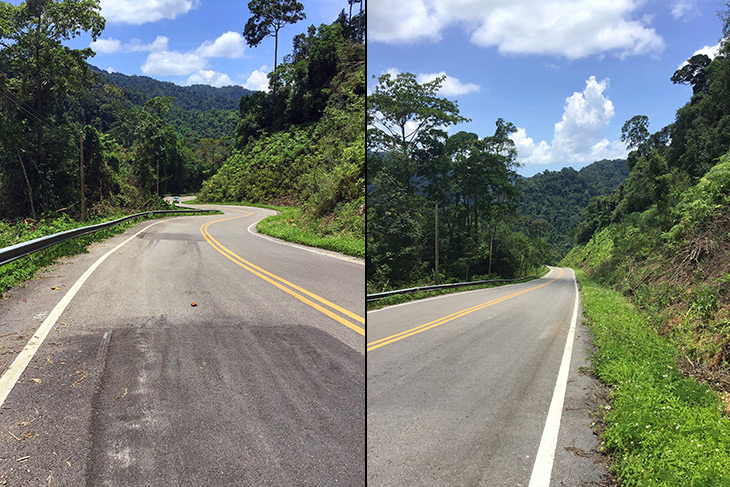 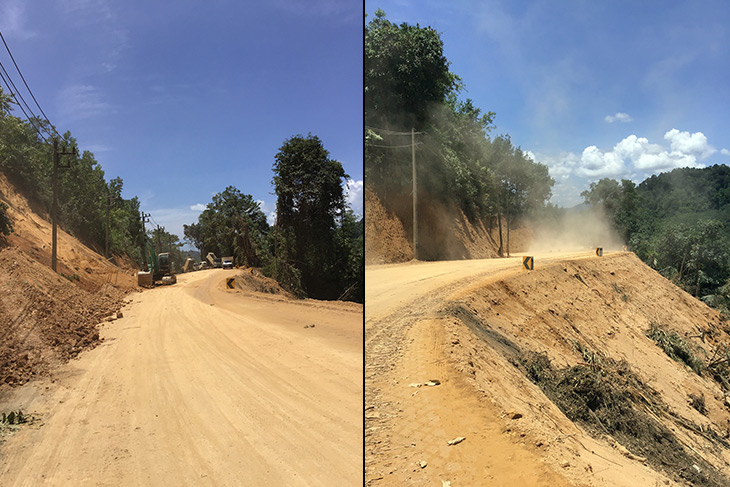 But, oh what scenery. Stops were frequent. Ooing and ahhing to myself might be a sign of madness, but I felt it was warranted. Aside from which… never mind… 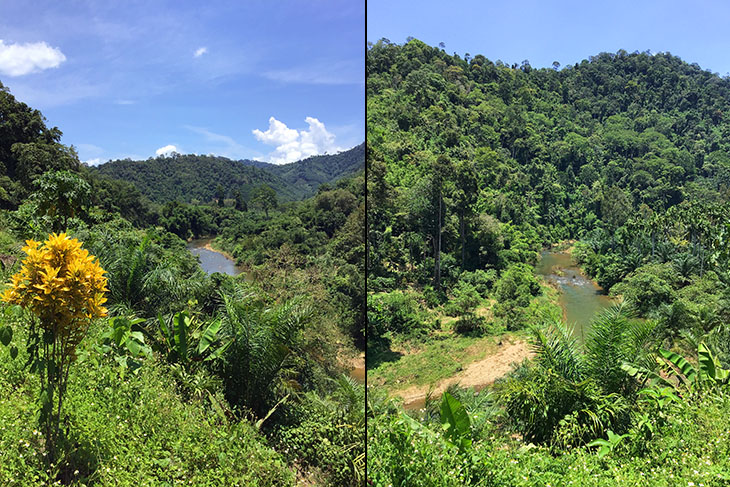 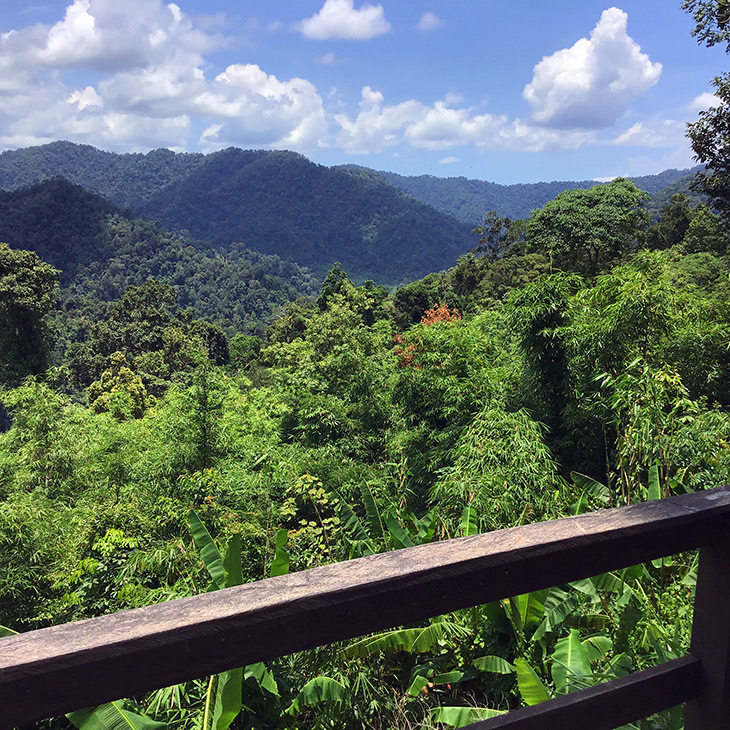 That hour or so was the best part of the trip. If you ever feel the need to visit Ranong, take the northernmost of the mountain roads. You won’t regret it. They might even have finished building it by the time you get there.

It’s a surprisingly short trip to cross from east to west, but, you see, at about 45kms wide, this is the narrowest part of the Malay Peninsular. It’s known as the Isthmus of Kra. I think I shall return on Dec. 25th. so I can wish you all a Merry Isthmus.

You’ve forgotten to take your pills again haven’t you? Ed.

Anyhoo, having wiggled my way out of the mountains, it was a short drive to the Khao Fa Chi Viewpoint. Here, you can look across part of the Andaman Sea to the mountains which form the southernmost tip of Burma… 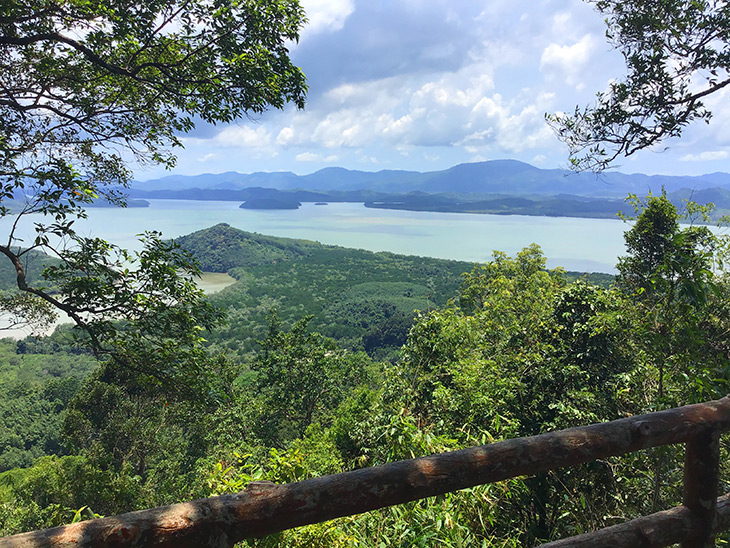 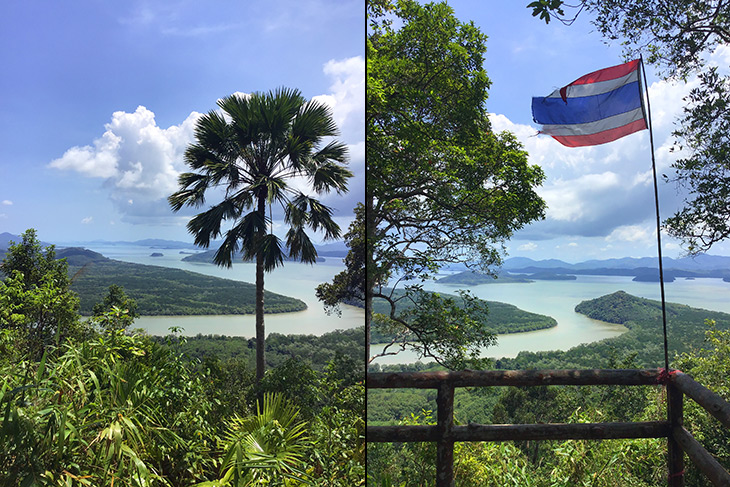 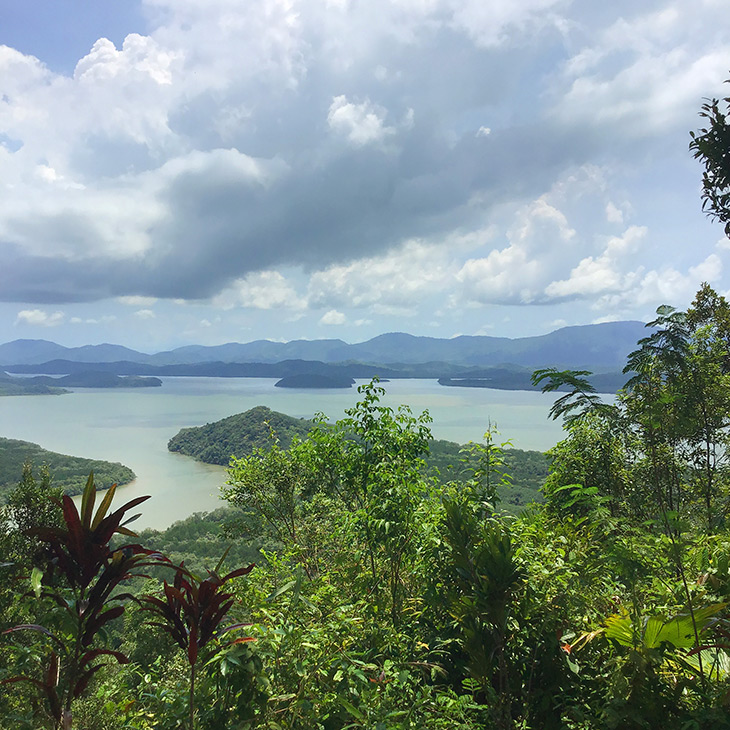 Four provinces and two countries in five hours. Whatever next? Not much, as it turned out.

Just down the road from there, and nowhere near a railroad track, there’s this… 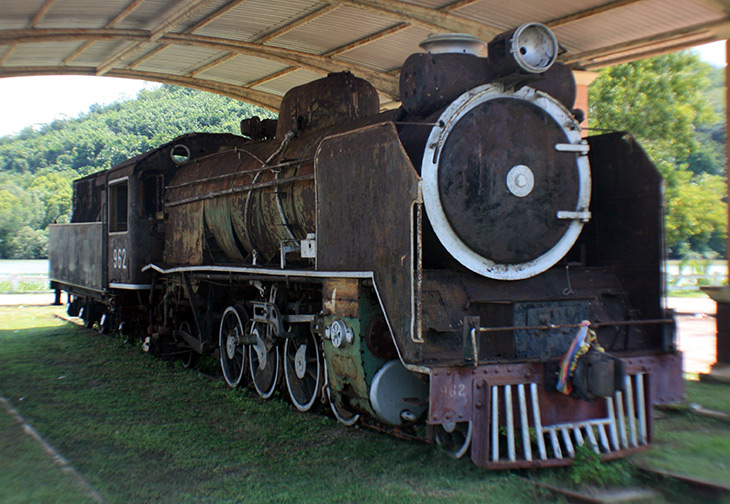 It must have some cultural significance but I’ve no idea what. For sure, it’s seen better days. And there’s also this… 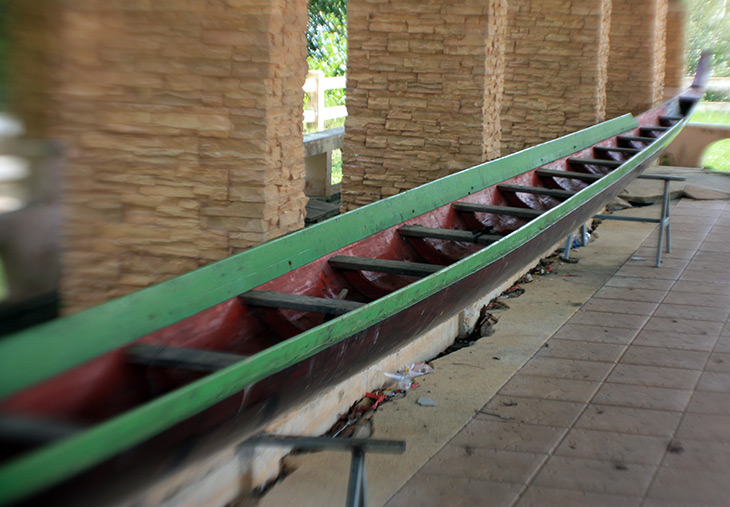 …similarly without explanation. I couldn’t help wondering if it was the narrowest longboat I’d ever seen, or the longest narrowboat. The decision is not keeping me awake at night. 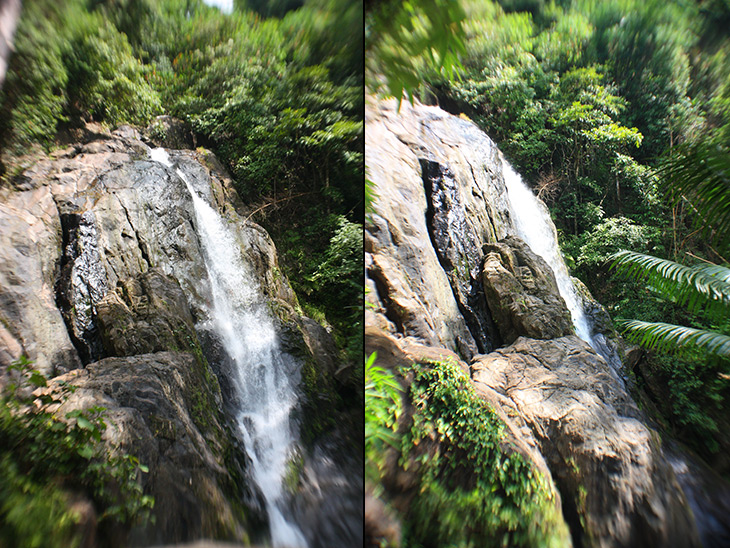 Pretty, but it’s no Niagara. The thing that got me wound up was the entrance fee. Just to stand there and take a few pics? Maybe it covers the cost of some guy climbing the rocks twice a day to turn the tap on and off. But worse was the fact the fee was ten times higher for nasty foreigners than for nice Thai persons. They think we’re too stupid to read their signs in Thai scribble, but I glanced at it, realized the significance, waved my finger at the ticket sellers in disgust (with a smile) at which point they fell about in hysterics. I guess it was worth the fee to see that.

So, I doubled back to take the coast road, to see … nothing.

The coast is not attractive. Not even worth a photo. But I did want to see the Port of Ranong. It has a long pier with a tall and wide lighthouse-like structure at the end, which has an observation deck so you can watch the ferries venturing to and fro across from Burma. I’d planned to send a drone over the sea to get a superb view of port, sea, boats, islands, et al. But I had my brain switched off. I couldn’t even get within 500 meters of the place. International Port, Covid-19, borders closed, etc., etc. Muppet.

So, I drove to Ranong to visit… No, I’ll keep the rest for tomorrow.