…More Than Just A River.

Ban Khiri Wong is less than thirty kilometers west of Nakhon Si Thammarat city. I went there a few months ago with friends, and friends of friends. I drove them from Nakhon, watched them splash around in the river for thirty minutes or so while fully clothed, and then drove them back to Nakhon.

At the time I thought, there’s more to this place than just a river.

I needed to go to Nakhon sometime this week, and today being Friday, I thought, it’s now or never. (Cue Elvis.) From Khanom it’s an hour and change, so I decided to go check out Ban Khiri Wong first.

The weather forecast predicted “overcast with showers” so I thought, good, that means a nice sunny day. Until sometime after lunch, I wasn’t wrong.

The approach to the village is interesting. The road gets ever narrower, and winds up into the hills – high enough that it’s aircon off, windows open, kind of cool. Nice.

To get to the village you need to cross the river bridge and make a left. I decided to turn left before the bridge, to get a more interesting perspective. So, straight off, let me answer the basic question … Why would anyone go to Ban Khiri Wong?… 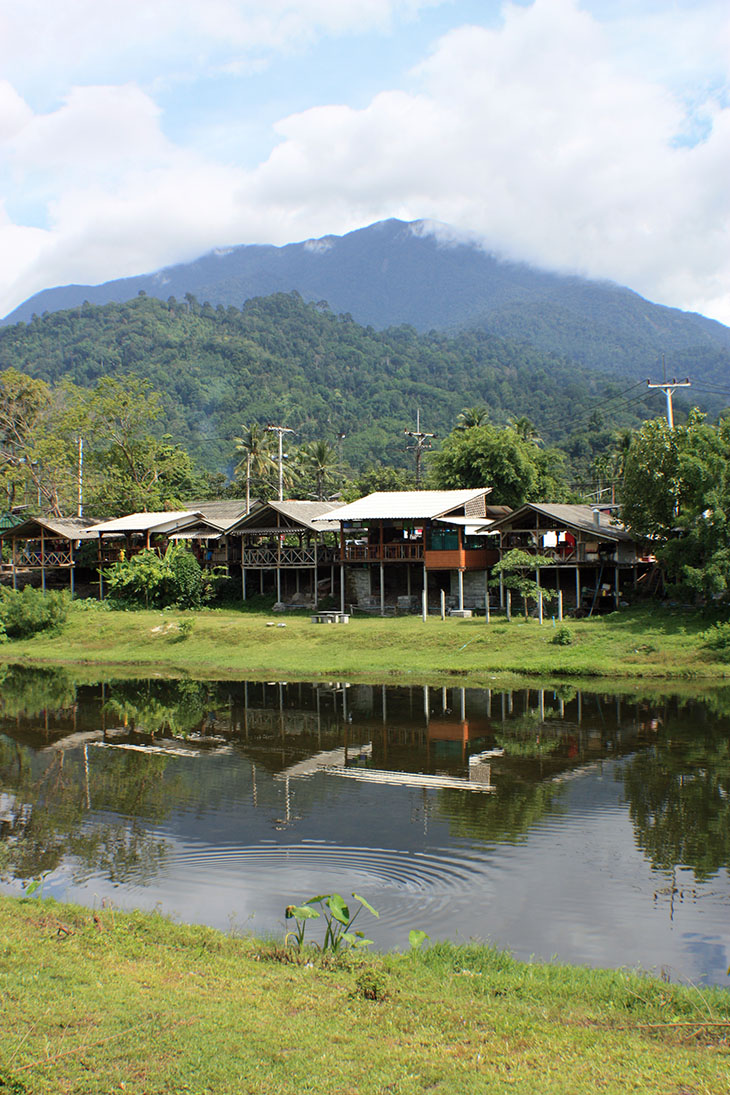 Nice river, pretty village, puffy clouds, clear mountain air, and a backdrop of Khao Luang. What’s not to like? The mountain by the way, at around 1800 meters, is the highest in Southern Thailand. Can you go to the top? Sure. It’s described as a “strenuous three day hike.”

You go. I’ll look after the car.

There’s a few places where you can cross the river, if you don’t mind getting wet. Dogs don’t… 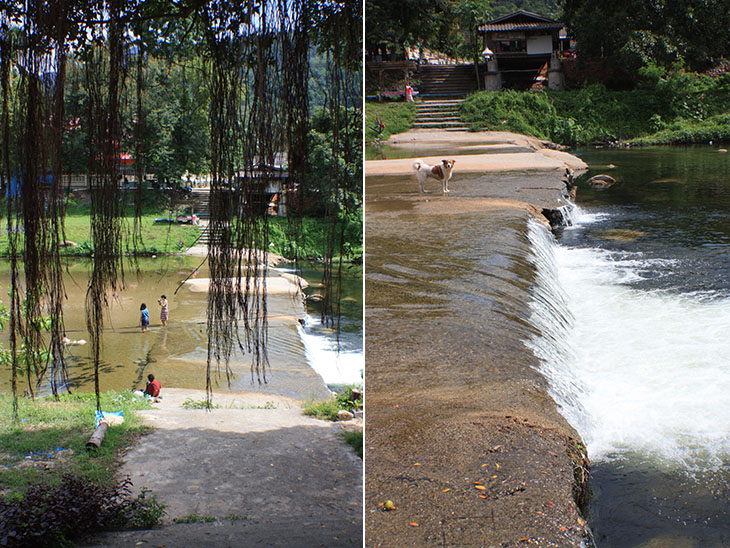 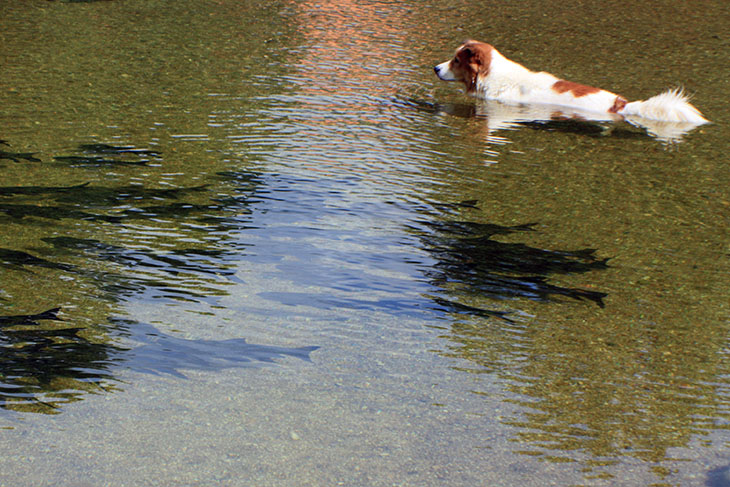 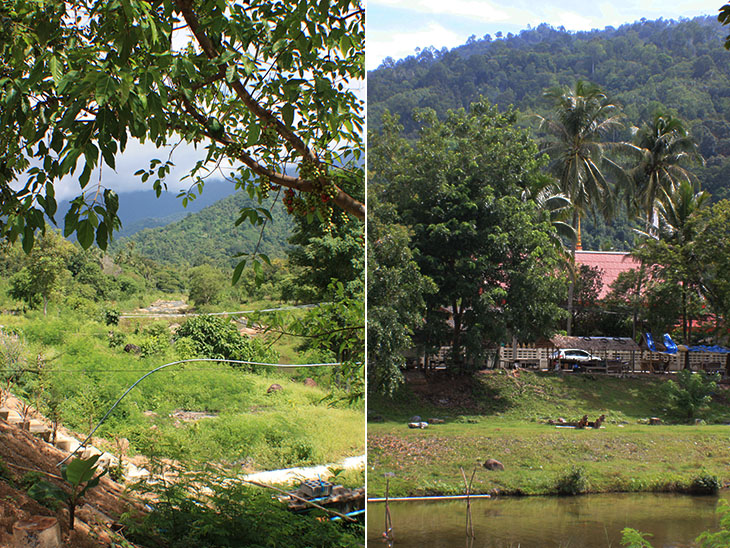 Now, it’s a little unfortunate that the place is so close to Nakhon, because it’s rather too popular with tourists. Today it seemed to be local school kids who came by the busload. And therein lies the problem. The village roads are slightly narrower than a bus. That makes maneuvering difficult. If two meet, which they do, that makes maneuvering impossible. The place ends-up in a bus-filled gridlock.

So, Bert was abandoned – which really was not a bad plan. This is a place to be visited slowly and on foot. Here’s some random village scenes… 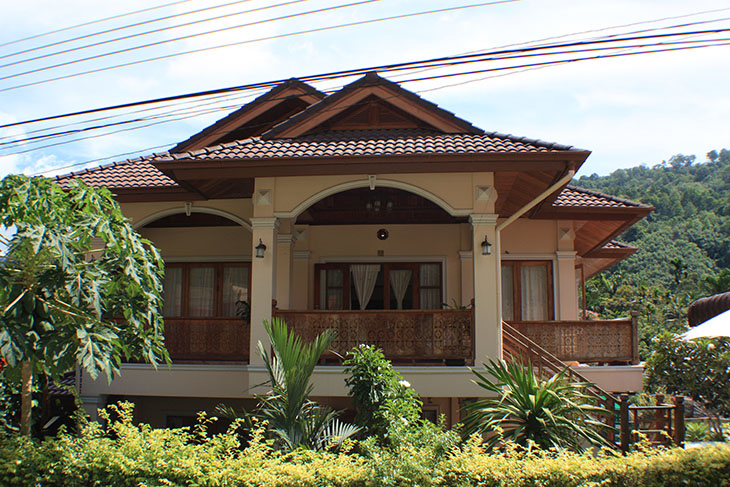 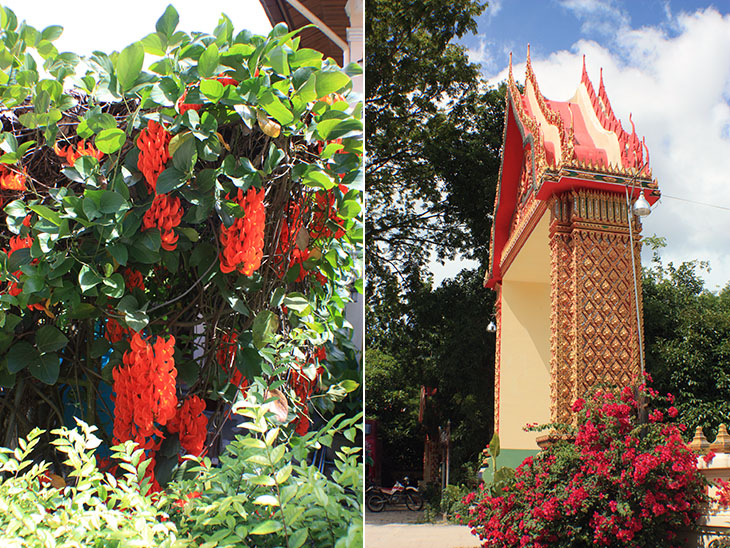 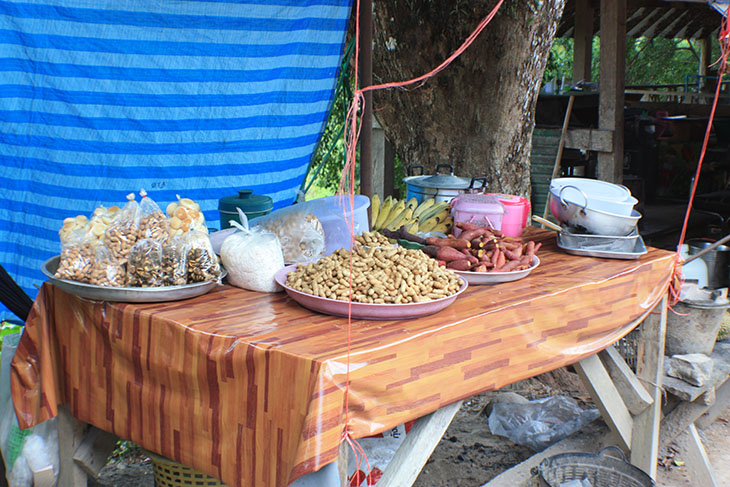 Next, I poked my nose into the local Handicrafts Center. I should explain, the village is included in the OTOP scheme. The what? “One Tambon One Product” – where tambon refers to a district. But it’s easier to think of it as One Town One Product.

However; from the handicrafts center I have to think someone is a little unclear on the concept. Here’s some views of the inside. Can you identify the “one product”?… 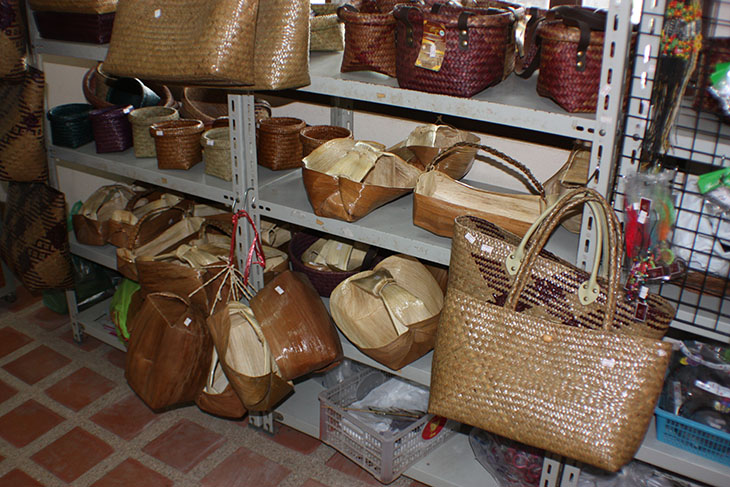 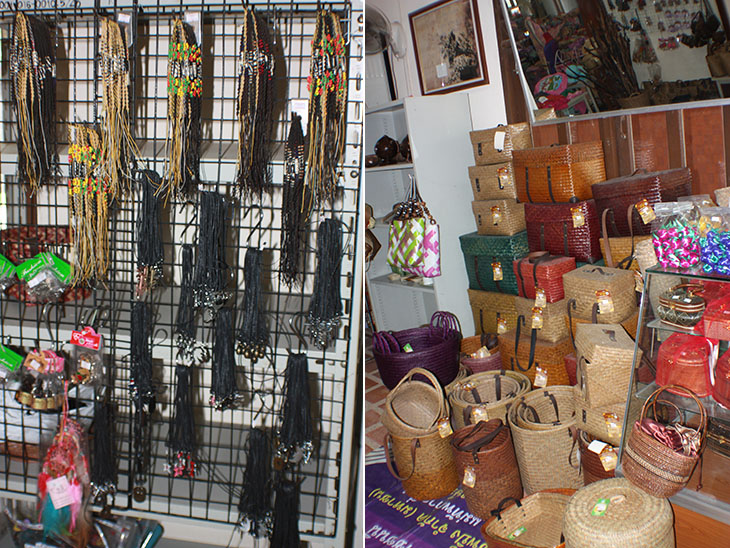 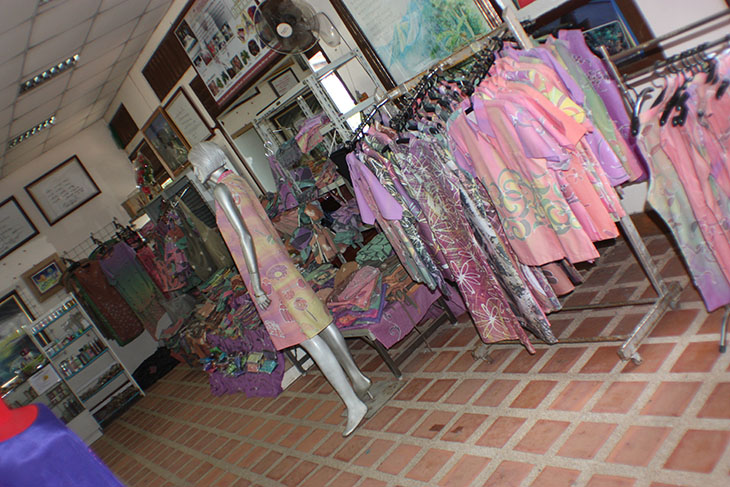 Actually, I thought the most famous product was fruit. There’s plenty on sale, but most at the moment are durian, durian and more durian. The whole town seems to be moving them from one place to another… 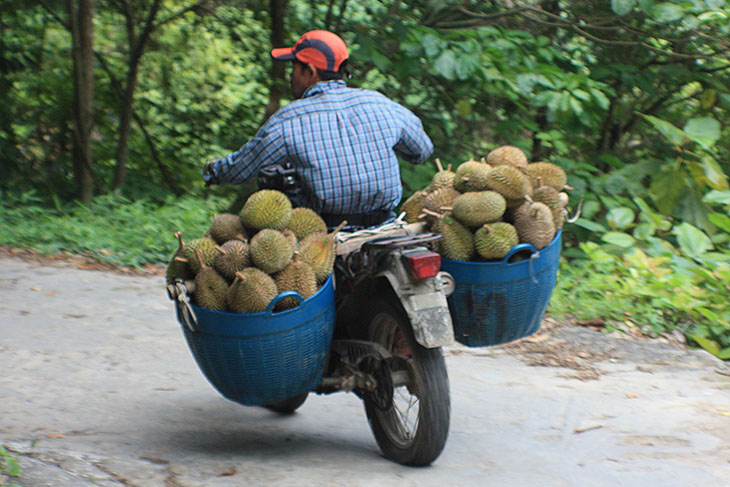 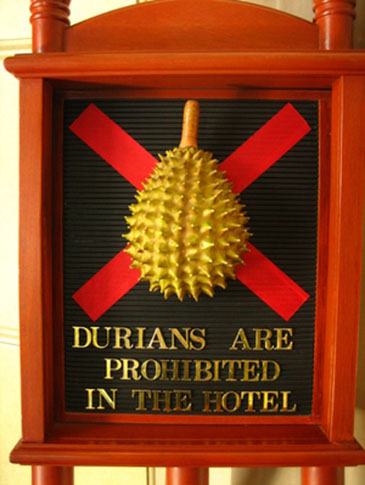 …and mostly on motorcycles driven by Valentino Rossi wannabes. They seem to forget that with the panniers they are almost as wide as a car.

If you’re not familiar with durians, they have large stones inside a number of segments, and around the stones there’s a creamy paste, which is what you eat. The taste is quite pleasant, but … they also stink! It’s quite common for hotels in the region to display “No Durians” signs. With good reason.

How bad is it? Well, someone famous – I forget who – once described them as like eating strawberries while sitting on the toilet. If you’re new to the region, it’s not a bad description. For me though, I’d say they also smell like strawberries, but eating them was a once-only experience.

There’s a downside. You must never mix them with alcohol. They ferment in your stomach, and do seriously nasty things. Where’s the fun in that? I have my priorities.

Also, not only does the taste linger, but you smell of durians for at least two days afterwards. I think they could be described as partner-unfriendly. Unless, I suppose, your partner eats them too.

Enough about durians. Back to the car. What’s next?… 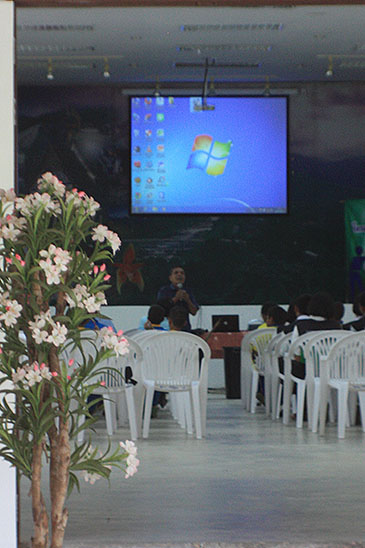 So it was one last look at the village before heading up some tiny road into the hills to go goodness knows where.

On the way I had to pass the Community Center, which has some interesting windows!

I didn’t linger because that guy with the the microphone is not giving a talk, but “singing” karaoke. Now if there’s one thing worse than karaoke, it’s karaoke in a language you don’t understand.

Well, it certainly was an interesting drive. Across the river, up the hill. Talk about narrow… 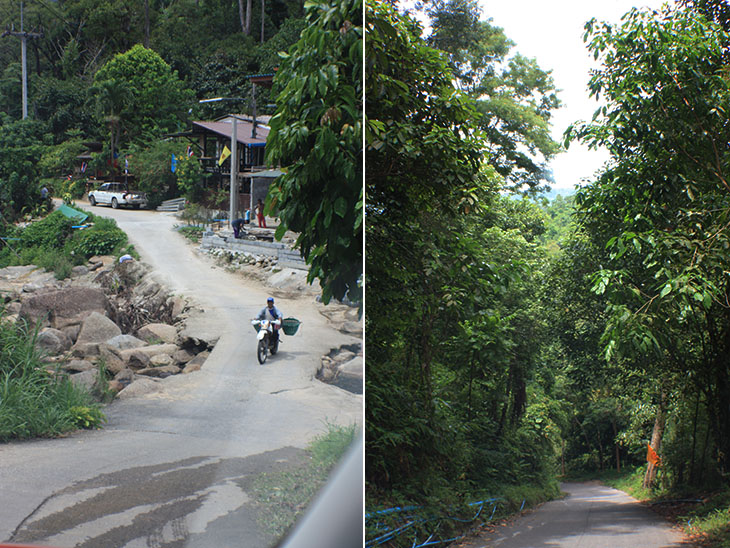 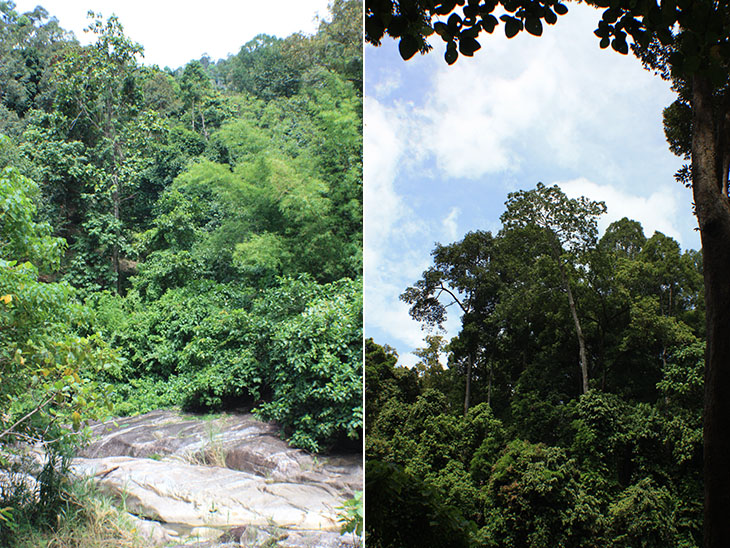 It seemed to lead to durian farms and this… 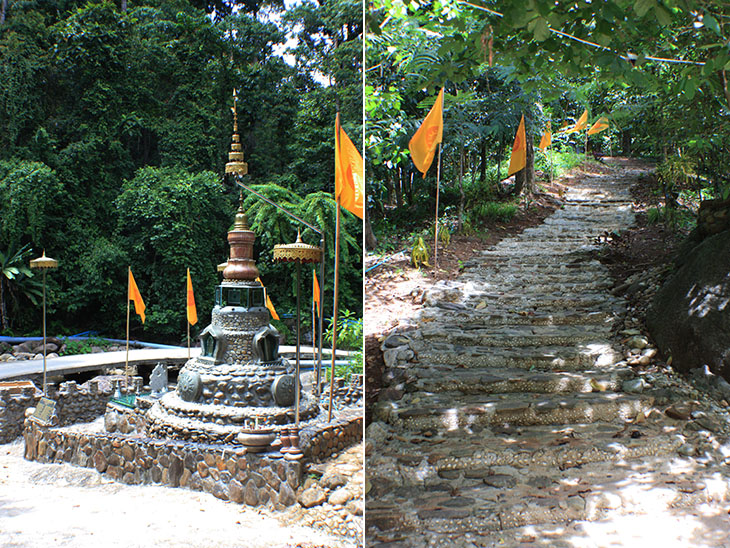 And there were steps to this… 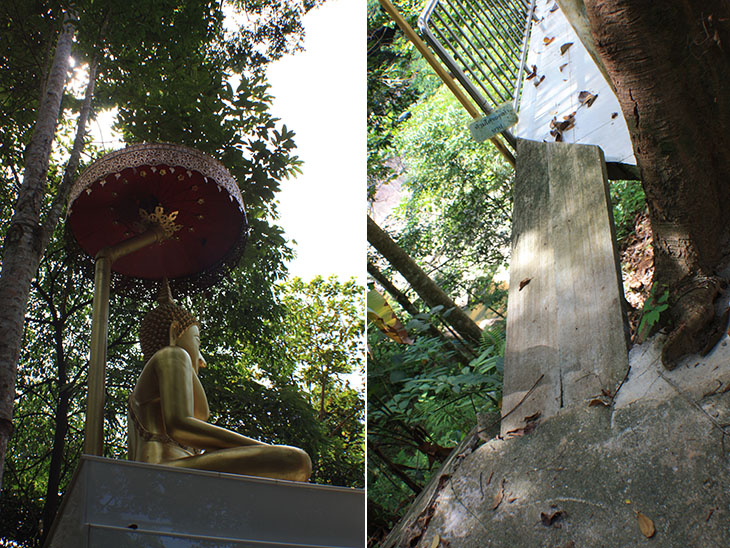 I’m sorry there’s no full-frontal shot of the statue, but to get one would have meant stepping on that skinny piece of wood, which has not much of anything underneath it. Or I could have gone round the other side, where there was no piece of wood … and jumped. I don’t think so!

Which just left the short drive back into Nahkon, to do the things I was supposed to be doing!