You’ve probably noticed earlier references to Surat Thani, and I must admit, I haven’t really stated which Surat Thani I’m talking about. Sometimes I go to Surat Thani International Airport, because that’s the closest place I can fly out of the country. But it’s a little ways outside Mueang Surat Thani, which basically refers to the capital area.

Surat Thani is also a Thesaban Nakhon, a city within the city area. And both of those are inside Changwat Surat Thani, which is the much larger Province.

I bet you’re glad I cleared that up. 🙂

Surat Thani, by the way, means City of Good People, and I’m not going to argue with that.

If you’re interested in earlier articles, there’s one about the island in the Tapi River which runs through the city, and one about the modern Cathedral just outside the city area.

Today, I needed to do what I call “special shopping.” That means buying some things not normally available in Sichon. Or sometimes things that need a careful explanation in English, because functioning in English is quite easy in Surat Thani, but almost impossible here.

The Lonely Planet Guide describes Surat Thani city as a place you go through, rather than to. It has ferries to the islands, like Koh Samui, or buses to the much larger jetty at Don Sak. With so many international tourists passing through, a knowledge of English is a definite asset.

But to say it’s not worth visiting does it a bit of mis-service. It wouldn’t be unfair to describe it as grubby, but at the same time it has character … mostly because of the presence of the river. And the winding of the river means the roads and lanes wind with it. It’s easy to get disoriented. [That’s man-speak for “lost”.]

Anyhoo, I decided to do a little sighseeing along with the shopping. I began to the east of the city, where the Tapi River empties into the Bay of Bangkok. I could see there was a road running close to the river, with a few side lanes running out to the river banks. But most of the latter were private lanes running into a shipping company yard or a warehouse compound. Eventually I found one that gave me a river view, but I only reached this by “accidentally” not stopping at a security post, and by driving through a fairly exclusive housing estate. The end result was probably not worth the effort…

So I went into what I guess is the city center, where there’s a few public jetties. The pace of life here is slow, so it was quite relaxing. Here’s a few photos… 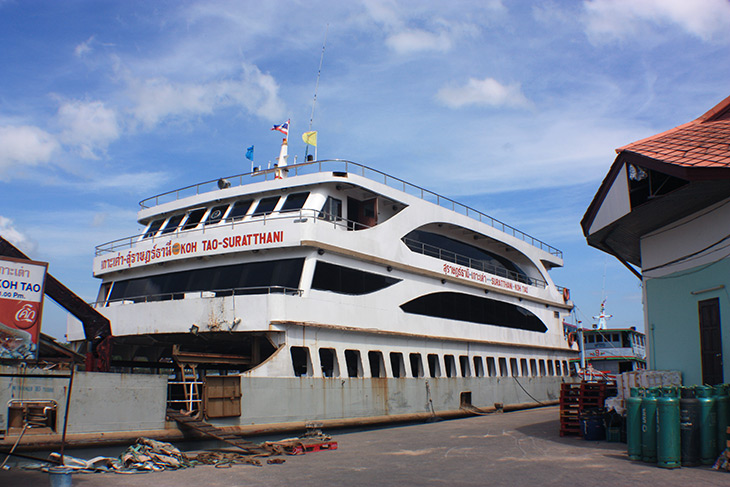 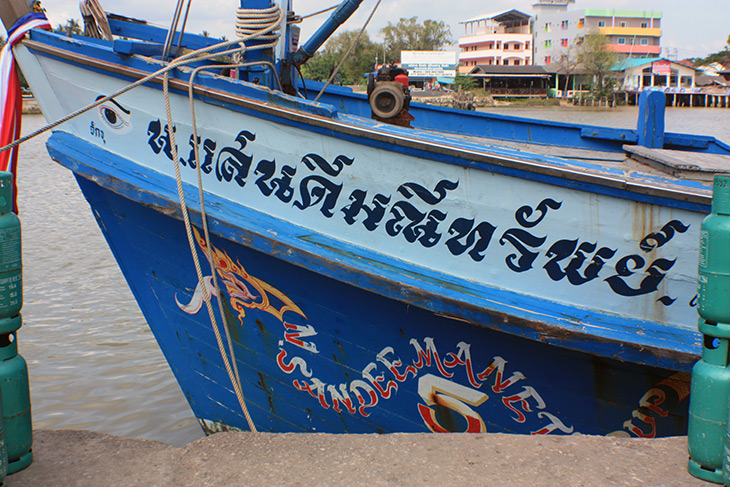 The most interesting thing though, was chatting with one of the longtail boat “drivers.” He does river tours, taking-in all the narrow channels that wind through the city. I had too much to do yesterday, but I promised him I would return soon, which no doubt sounded like an excuse he’s heard a thousand times. But I will, and soon. I’m quite excited.

Aside from being busy, my feet were killing me. I’d foolishly put on some new shoes, and equally foolishly they turned-out to be at least a half-size too small, so I was anxious to get the shopping out of the way and get home. Some new skin is now needed.

But before I left the city and headed out to the shopping centers, I hobbled across the road to visit the City Shrine… 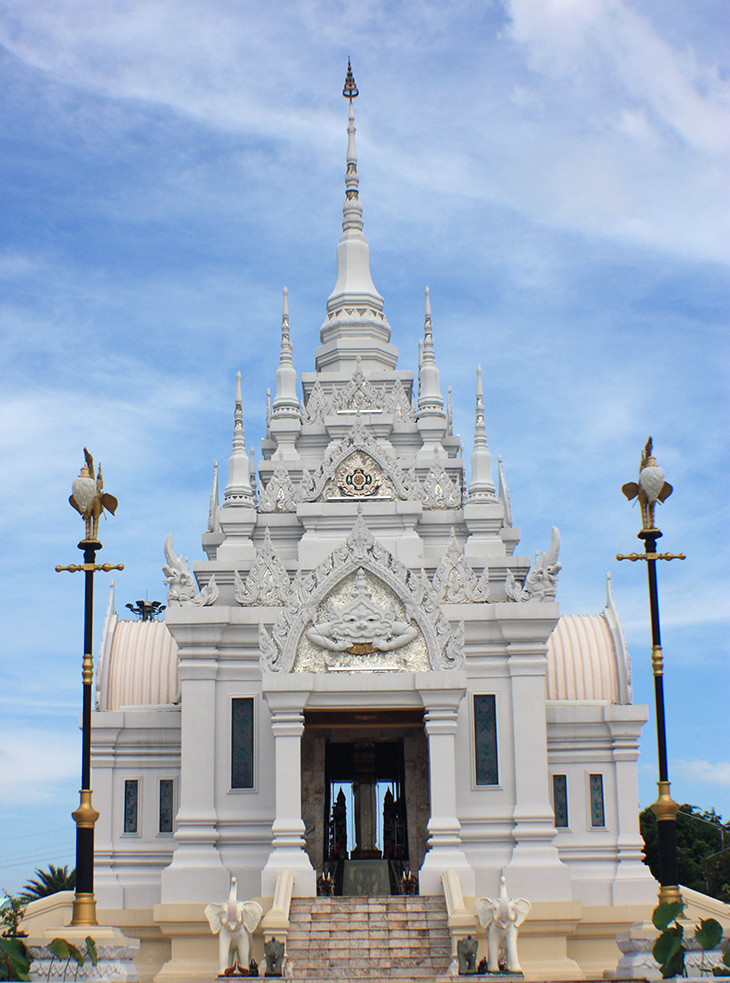 It’s attractive, although I’ve read it’s best to see it at night. But what is it? I’m not sure. Just an impressive thing stuck in the middle of the city. I presume it’s a holy place of some kind, but nothing I can find online tells me why. 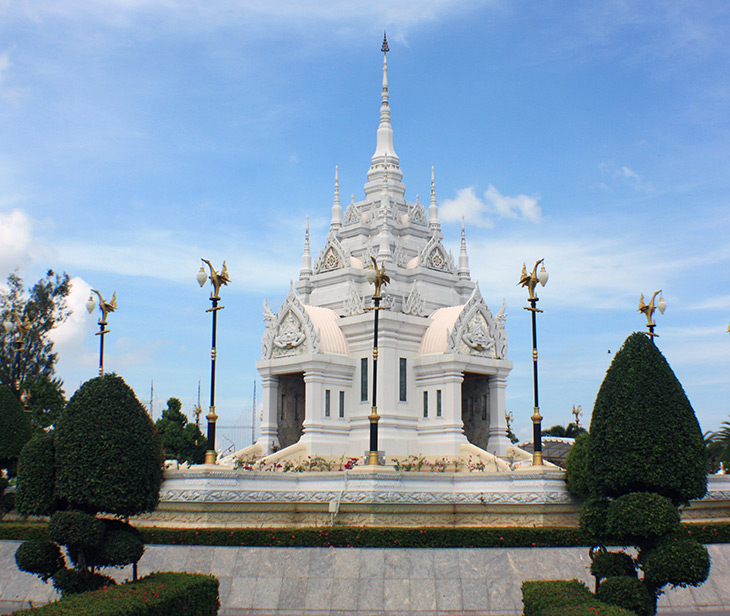 So after shopping I started the journey home – making just one more tourist stop. A little ways outside Surat Thani – the city I mean – there’s a small road which heads out to the sea, so I headed down it to see. At the end there’s a small fishing village called Ban Pak Nam Kra-Dae. Not that you would initially know it’s a fishing village. The sea is obscured by seafood restaurants and stalls. Only by wandering along narrow alleyways, and probably across people’s property could I get a view of the fishing boats and the mangroves… 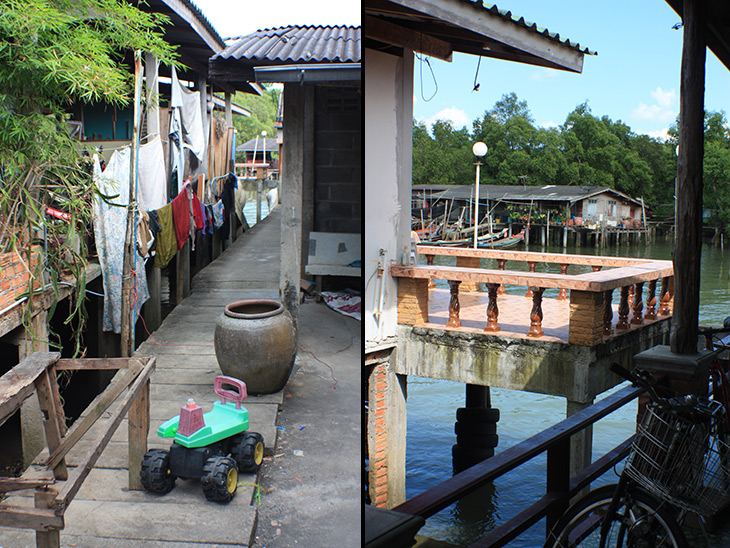 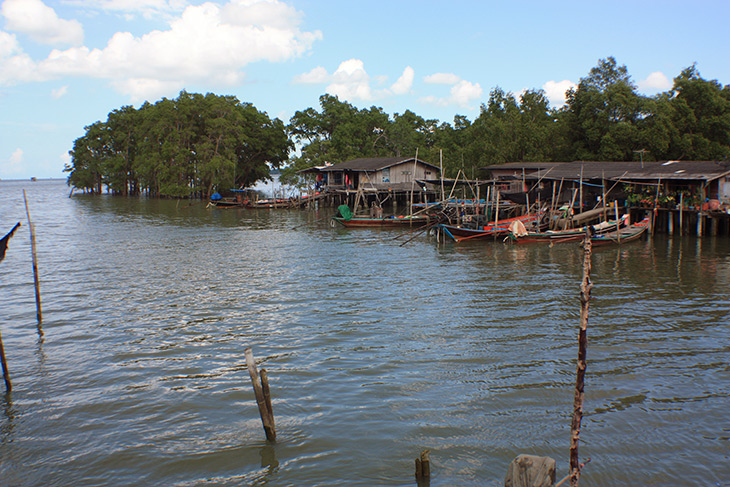 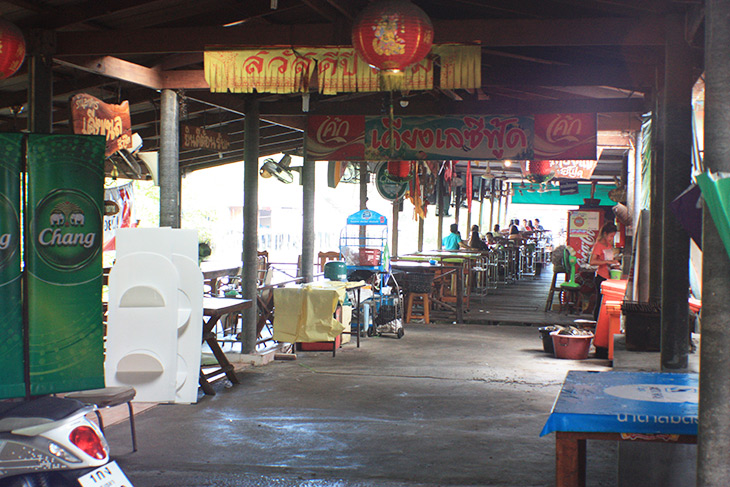 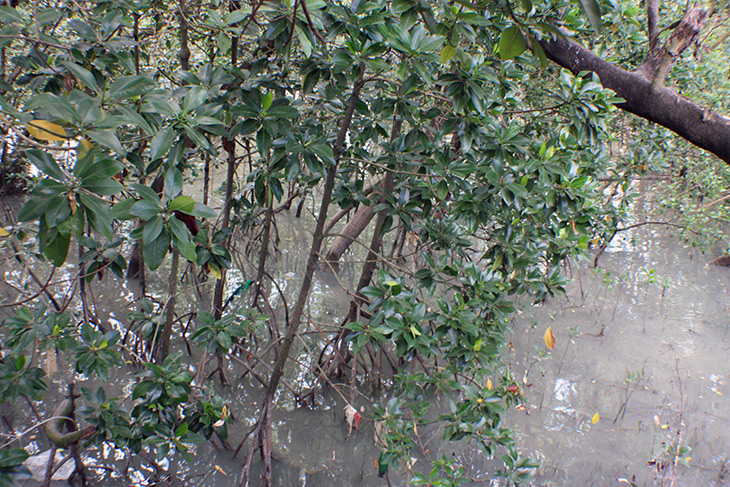 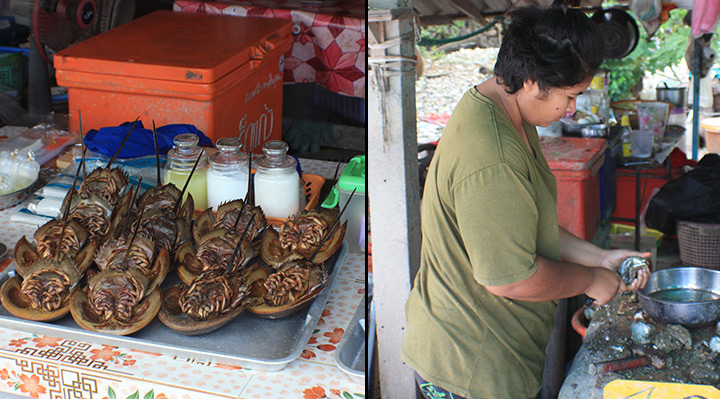 Best not to discuss the strange creatures on the left (people really eat these?) but I think those are rock oysters on the right. They need to be bashed with a hammer before they can be opened. Everything seemed to generate quite a crowd, even mid-afternoon, as did the strange farang taking the photos!