Early afternoon was spent at the National Museum of Songkhla, although I think I spent more time outside the building than in it.

First though, I paid a visit to the Governor’s Residence – Phra Tamnak Khao Noi. Tourist info rates it highly, but it turns out you can only see it from the street, and that isn’t exactly close. He has a nice view though. The hill is where I’d just come from. The green line on the right of the hill is where the elevator runs… 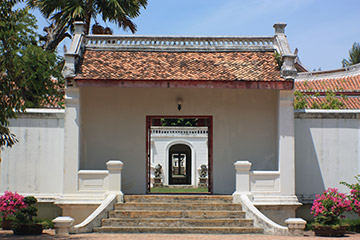 The building was constructed in 1878 in what is very clearly a Chinese style, originally to serve as the residence of the Songkhla ruler. I’m glad they booted him out to live in the new place. I wandered around the outside for quite some time, so here’s some building photos first:

And, for sure, there were some things inside that were worth a photograph or three:

By this point, I must admit, I was moderately pooped. So, I decided to check into the hotel and take a break. It gave me a chance to look through the photos so far, and to plan the rest of the day. That story is coming soon…